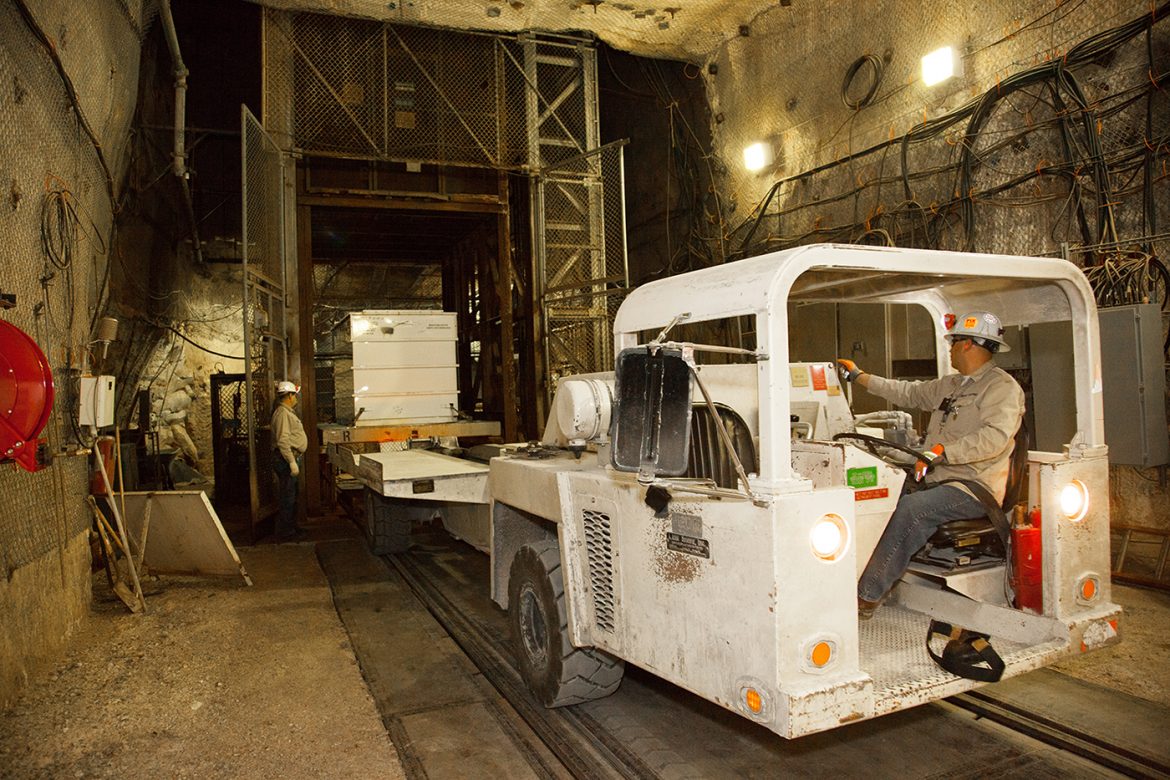 Waste is transported into disposal rooms underground at WIPP.

The underground nuclear waste repository is officially back in action, nearly three years after two fires shut down operations.

According to a story in last week’s Carlsbad Current-Argus, the facility’s employees started moving waste into the salt caverns last Wednesday:

Rick Fuentes, president of the local chapter of the United Steelworkers Union and waste handler at the site, confirmed that two pallets of low-level radioactive waste were emplaced near Room 5 in Panel 7 at 12:45 p.m. Wednesday.

“It went great,” Fuentes, who did not assist in the waste emplacement, said. “We’re excited to be back to work.”

In a separate story, the newspaper also reported that the shipping schedule is “under development,” but that waste is expected to arrive in Carlsbad from sites in Idaho, Tennessee and South Carolina.

More than two years ago, the U.S. Environmental Protection Agency announced that to reduce pollution, the owners of the Navajo Generating Station needed to either shut down one of the coal-fired power plant’s three 750-megawatt units or cut some of its power generation by 2020.

Now, according to the Farmington Daily Times, Salt River Project is trying to decide if they’re going to close the plant entirely, maybe even as early as this year.

Salt River Project is supposed to make a decision before this spring, according to the story:

SRP’s decisions with the Navajo Nation and other entities “are just an attempt to keep those entities aware of circumstances of the plant at this time,” [SRP spokesman Scott] Harelson said. “The reality is the economics of coal generating (are) changing rapidly. That is what is driving this latest analysis and potential scenario for the plant.”

The plant’s lease with the Navajo Nation expires at the end of 2019.

The Daily Times also covered a new EPA report about the 2015 mine disaster that sent aluminum, iron, manganese, lead, copper, arsenic, zinc, cadmium and mercury from an abandoned gold mine down the Animas and San Juan rivers.

In its report, the EPA also noted that the Gold King Mine release—which occurred for nine hours—is comparable to the amount of metals normally carried by the river in one to two days of high spring runoff.

The report can also be found on the EPA’s website.

The West to the feds: tread lightly

I’m still catching up on some of last year’s news—and was intrigued by a letter that five western policy organizations sent to President-elect Donald Trump and congressional leadership in December. In it, they outline principles to “clarify and strengthen” the state-federal relationship.

The organizations, which drew up the principles together, include the Western Governors’ Association, Conference of Western Attorneys General, Council of State Governments West, Western Interstate Region of the National Association of Counties and the Pacific Northwest Economic Region.

According to the letter, the groups seek to operate as “authentic collaborators” in the development and execution of policy.

The principles remind the Republican president-elect and congressional leaders that federal powers over states are limited and note that in the “absence of clear constitutional or statutory authority, the presumption of sovereignty should rest with the individual states.”

Last week, E&E News reported that the president-elect’s choice to lead the U.S. Department of the Interior, Montana Congressman Ryan Zinke, gave environmentalists a scare by voting in favor of a rule that would consider federal land transfers “cost-free and budget neutral.”

Western states like New Mexico have millions of acres of public lands that are administered by Interior Department agencies like the the U.S. Bureau of Land Management, U.S. Fish and Wildlife Service, Bureau of Indian Affairs and the National Park Service. Some areas, like national parks and refuges, are protected for visitors or wildlife, but most are still open to activities like mining, logging and oil and gas drilling.

The issue of transferring federally-administered lands to states or private owners is a worrisome one to many. Public access for small-scale grazing or logging, recreation, hunting and fishing could be curtailed, and the federal government would lose out on royalties for natural resources mined or drilled from public lands.

Zinke, who had called himself a “Teddy Roosevelt Republican” and had in the past criticized federal-to-state land transfers, was considered by some to be a less radical choice for Interior secretary than other names reportedly floated for the job by the Trump transition team.

According to E&E News story:

No one knows for sure what the rule change will mean for public lands.

House Natural Resources Chairman Rob Bishop (R-Utah) inserted the provision into the rules package. He has argued that states can better manage some public lands, and in recent weeks has urged Trump to roll back President Obama’s national monument designations.

The new rule allows the House to disregard the cost of a land transfer, as determined by the Congressional Budget Office. The CBO’s estimate comes from the loss of revenue from activities like drilling, logging and grazing.

Look to the skies

Last week, a link for a world air pollution map landed in my inbox.

Once I stopped staring at the wind patterns and started scrolling around the globe, it was hard to look away from high amounts of air pollution in places like Central Africa, Asia and the U.S. Rust Belt.

There are even clots of air pollution in the American West, notably around Denver, Los Angeles, the California-Mexico Border and the Four Corners region, including in New Mexico.

Take the site for a spin yourself at: https://airvisual.com/earth

And speaking of skies, National Geographic News ran a story last week about a team of astronomers who managed to capture what’s called a “fast radio burst” from a dwarf galaxy three billion light-years away. Those are bursts of radio waves that flash very briefly, but with huge amounts of energy.

While looking for the bursts, the team of astronomers uses radio telescopes around the world, including the 27 dishes at the Very Large Array near Magdalena, New Mexico.