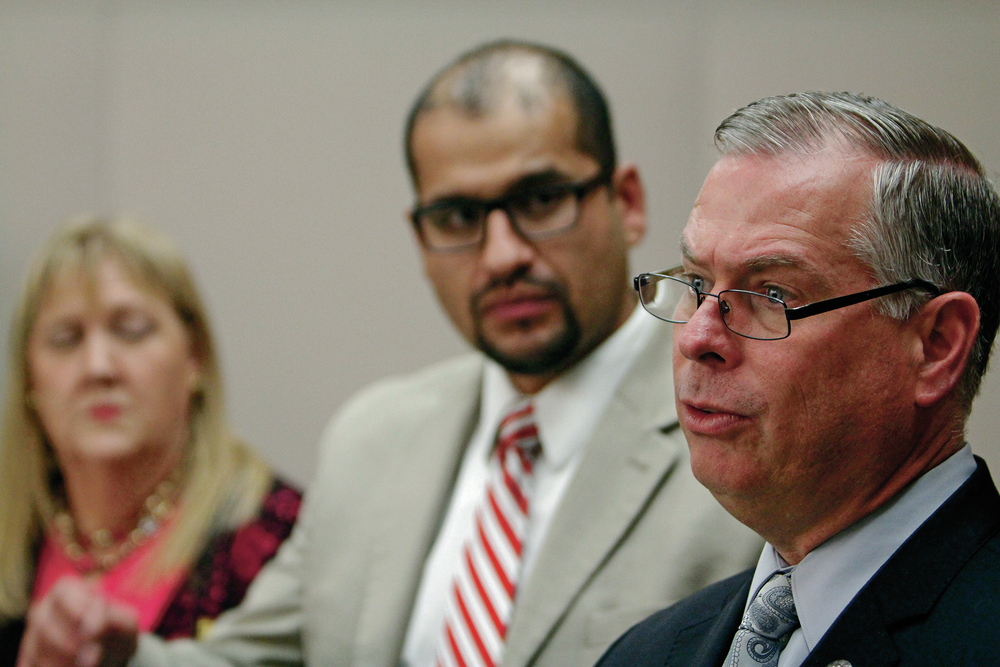 Sen. Daniel Ivey-Soto, D-Albuquerque, right, with Reps. Javier Martínez and Liz Thompson, both Democrats from Albuquerque, speaks Wednesday, Jan. 18, 2017, during a news conference about a proposed constitutional amendment for automatic voter registration for those eligible to vote.

All eligible voters in New Mexico should be registered, and the government should do it for them automatically, three Democratic lawmakers said Wednesday in announcing a proposal to enshrine new election law in the state constitution.

The legislators said their proposal for automatic voter registration would reduce costs and create a more accurate system.

Another likely benefit would be more people voting and holding government accountable for policy decisions, said Rep. Liz Thomson, one of the measure’s sponsors.

“The more voices we hear, the better we can represent them,” Thomson said.

She is teaming on the proposed constitutional amendment with Rep. Javier Martinez and Sen. Daniel Ivey-Soto. All three sponsors are from Albuquerque.

Ivey-Soto, executive director of the state County Clerks Association and the Legislature’s recognized expert on election law, said government in the United States has a long record of making it difficult for people to vote.

He cited an early voting law in Massachusetts that said those eligible to vote were “not of the Negroid race, male and a property owner.”

Instead of setting restrictions, government should automatically register everybody who’s eligible to vote, Ivey-Soto said.

Six other states, including California and Oregon, recently approved automatic registration for every eligible voter.

Secretary of State Maggie Toulouse Oliver stood alongside the legislators and advocated for the change. She was the Bernalillo County clerk last fall, when 20,000 people in her jurisdiction registered just before the deadline to vote in the general election.

Toulouse Oliver said her office incurred overtime for employees trying to accommodate the crush of people registering to vote. Then, because of questions about residency or eligibility, some 2,000 people who had registered received provisional ballots, meaning their vote might not count.

Government registration of people when they become eligible to vote would be smoother and far less labor intensive, Toulouse Oliver said. Another benefit, she said, is that the data bank of voters would be more accurate because it would be updated more quickly. As it stands, voter registration rolls lag behind the most current information, such as when people move, Toulouse Oliver said.

None of the lawmakers offered specifics on how automatic voter registration would work. Those details would be established by the Legislature or perhaps the secretary of state if voters approve the concept of automatic voter registration. But Ivey-Soto said the state’s compliance with the federal Real ID law in issuing driver’s licenses would help prove voter eligibility. Applicants for a driver’s license under the Real ID act must provide identifying documents such as a birth certificate, Social Security card or passport.

The sponsors’ goal is to get their resolution through the Senate and House of Representatives in the 60-day session now underway. If a majority of those elected to each legislative chamber supports the constitutional amendment, the proposal would appear on the general election ballot in 2018 for voters to make the final decision.

Thomson and Martinez introduced the resolution in the House on Wednesday. It had not yet received a bill number.