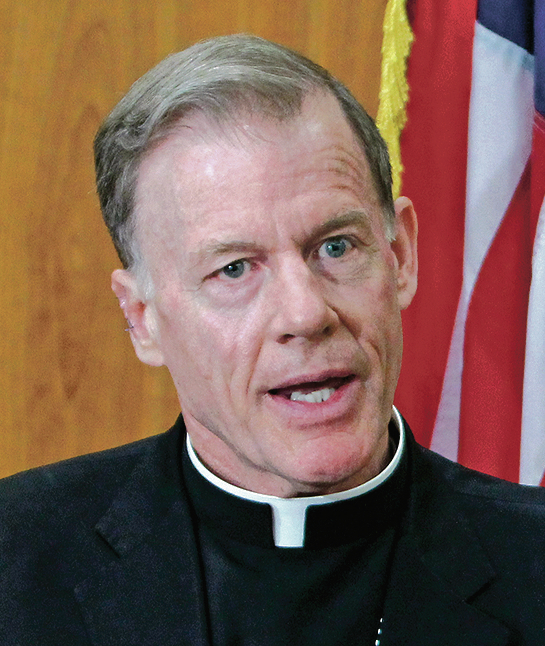 Wester appealed to legislators during the annual prayer breakfast to back a constitutional amendment that would allow the state to use 1.5 percent of investment revenues each year from the state’s $15 billion Land Grant Permanent Fund. This plan would provide an estimated $140 million annually for early childhood education, defined as applying to children from the prenatal stage to age 5.

The archbishop said using the fund for early childhood education would boost the quality of life for young people in a state with one of the highest rates of child poverty.

“We see the high crime rate, the poverty rate, the violence, the addictions — these things are all directly connected to early childhood,” Wester said.

But Republicans and some Democrats have long opposed using the land grant endowment for early childhood education. The fund was established by Congress when New Mexico became a state and is intended to provide a steady stream of revenue for public schools.

Weste, though, discounted reports that say using a share of the fund would cast into uncertainty its ability to provide a reliable source of revenue for public. He said the fund has already survived two “doomsday” scenarios — a decline in the stock market as well as the shriveling of oil and gas production.

Wester said spending the money on early childhood education would not only give young New Mexicans a better start but create an estimated 4,000 jobs.

Tapping the fund for a new purpose would require approval from Congress and would require state legislators to ask voters to approve an amendment to the New Mexico Constitution.

A few dozen legislators from both parties attended the prayer breakfast at the Shrine of Our Lady of Guadalupe. The annual event is a platform for the state’s Catholic leaders to weigh in on the issues of the session and even bluntly challenge New Mexico’s top public officials on their stands.

Clergy on Wednesday also appealed for lawmakers to oppose reinstating the gross receipts tax on groceries, a proposal legislators have mulled as part of a broader package of tax reform.

The Very Rev. Richard A. Catanach, vicar general for the Diocese of Las Cruces, said the tax system needs reform but should not place a greater burden on the state’s poorest residents, who spend an outsize share of their income on basic necessities such as food.

“New Mexico is poor, and revenue is needed to care for her citizens,” Catanach said. “Tax reform is needed so that those least able to afford paying taxes do not end up paying it on something such as food that they literally cannot live without.”

Clergy also appealed for lawmakers to oppose abortion, the death penalty and any laws that would allow for physician-assisted suicide.

And, after a heated election season often characterized by personal attack ads, Wester urged lawmakers to respect one another.

“When people are attacked personally or put people down, that viciousness has no place in democracy,” Wester said.