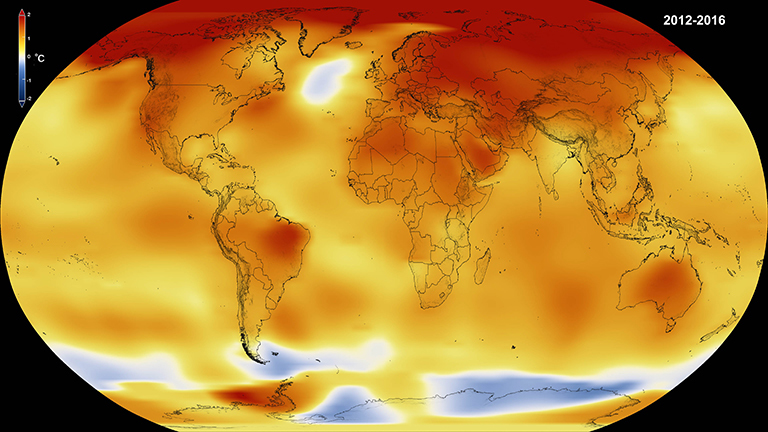 Global temperature anomalies averaged from 2012 through 2016 in degrees Celsius.

The numbers from around the globe are in, and it’s official: 2016 was the hottest year on record, again.

According to independent analysis from NASA and the National Oceanic and Atmospheric Administration (NOAA), 2016 was the third year in a row to break temperature records.

The New York Times collected AccuWeather data for more than 5,000 cities, including Albuquerque, to illustrate temperature and precipitation changes.

Globally, the average temperature has risen by 1.7 degrees Fahrenheit since the 1880s. And 9 of the 10 warmest years have occurred since 2000.

Meanwhile, Inside EPA reported that the Trump administration’s transition team for the U.S. Environmental Protection Agency plans to remove non-regulatory climate data from the agency’s website. According to the story, this includes things like references to President Obama’s 2013 Climate Action Plan and strategies for cutting methane.

During the early days of Gov. Susana Martinez’s administration, the New Mexico Environmental Department (NMED) did something similar.

As this reporter wrote in the Santa Fe Reporter in 2014:

Since Gov. Susana Martinez took office in 2010, New Mexico has repealed a rule directing polluters to reduce their carbon dioxide emissions and pulled out of a cap-and-trade plan that would have established a regional, market-based emission reduction program.

As general counsel, [Ryan] Flynn approved NMED’s plans to repeal its own regulation tightening emission standards for motor vehicles, and the department has pulled down from its website links to Richardson-era NMED reports and recommendations on climate change. It even ended the Climate Masters Program, a class about climate change that covered topics like watersheds and permaculture.

It’s worth paying attention to what will happen in the coming days and months to federal websites like Climate.gov, which this week featured an animation of annual temperatures each year since 1880.