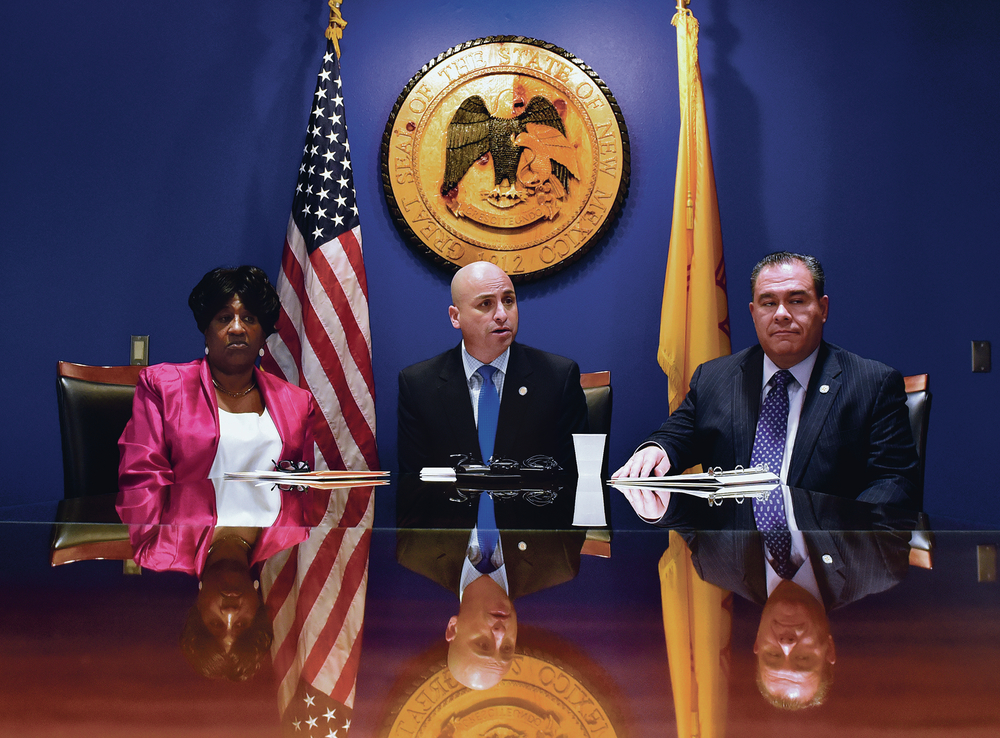 State Sen. Michael Padilla, an Albuquerque Democrat who was raised in foster care and has largely focused his legislative efforts on reforming New Mexico’s child welfare system, has introduced a measure to create a task force on child homicides. The proposal also would give the state attorney general authority to order an independent investigation into a child abuse death.

The team would include medical experts, law enforcement officers, prosecutors, child welfare workers, tribal members and others. It would be tasked with evaluating investigations of a child’s death, as well as examining how agencies and individuals responded to concerns about the child before the slaying. The task force also would make recommendations to the Legislature on needed reforms.

Senate Bill 294 comes as New Mexico experiences a steep rise in child abuse cases. It also comes months after a high-profile case in which 10-year-old Victoria Martens was found slain and mutilated in her Albuquerque home in August in one of the state’s most horrifying cases of fatal child abuse. Her death was “not only one of the worst tragedies in our community, but leads us to more questions than answers,” New Mexico Attorney General Hector Balderas said during a news conference Thursday on the bill.

Padilla said the bill was a few years in the making. When 9-year-old Omaree Varela was beaten to death by his mother in Albuquerque in 2013, the same year Padilla took office, he said, he began to consider the need for systemwide reviews to determine if some of New Mexico’s most vulnerable young residents were falling through the cracks.

Albuquerque police officers and state child welfare officials faced criticism over Omaree’s death because they had received earlier reports of abuse and had not removed the boy from his home. One police officer was fired for how he had handled an abuse report, and Gov. Susana Martinez ordered several changes to policies on child abuse and neglect investigations.

A couple of years earlier, the death of 3-year-old Leland Valdez of Pojoaque had raised similar concerns. Leland’s father had reported suspicions that the child’s mother and boyfriend were abusing him months before he was rushed to the hospital in 2011 with fatal injuries. Photos of the tiny, injured child lying in a hospital bed while still clinging to life, drew shock and outrage across the state.

A state Children, Youth and Families Department supervisor eventually was fired over accusations that she had mishandled the case.

After Victoria Martens’ death, Padilla publicly called for the creation of a child abuse homicide review team. Victoria, who authorities believe had been raped, strangled and dismembered by her mother’s boyfriend and the man’s cousin while her mother watched, had spoken with state social workers three times in the year before she was killed.

A recent internal report from the Children, Youth and Families Department says nothing in those talks alerted child welfare workers that Victoria may have been subjected to physical or sexual abuse.

Padilla, who has been a critic of the department, said Thursday his bill is not a response to concerns about one agency. Rather, he said, it “looks at all agencies” and “takes the personal and political out of it.”

Children, Youth and Families Secretary Monique Jacobson, who stepped into the position in 2015, said she agrees with the intent of the bill. “When tragedy strikes,” she said, “we do look at how systems can be improved.”

Balderas said the bill would ensure that agencies work together to identify ways to improve the child protection system and that families and communities get “real answers” when a child is killed. Under the bill, much of the team’s work would be kept secret because of confidentiality laws affecting cases involving children.

New Mexico saw 27 child homicides between 2011 and 2013, the most recent statistics available. “Fourteen of these children were killed in that period in the hands of primary caregivers,” Balderas said.

The Rev. Laura Bobbs, Victoria’s godmother, spoke in favor of the measure, saying she believes it will help stop such violence against children. “They have a voice, and that voice is ours — legislators, officers, teachers, social workers … working together as a community to end these tragedies.”

Balderas said his office would work with the Children, Youth and Families Department on the effort and would rely on the department to help fund the initiative.

That’s one problem Jacobson has with the measure. It doesn’t include a funding provision. It comes at a time when the state has been struggling with a funding crisis, and agencies remain strapped. “We don’t have funding for this right now,” Jacobson said.

The bill also calls for the task force to partner with the state’s existing Crime Victims Reparation Commission, a panel that aids victims of violent crime.

Robin Brassie, deputy director of the commission, said the panel has seen a 130 percent increase in applications in the last year for cases involving child abuse. She sees a benefit to the proposed task force.

“It’s like a no-blame way of how to strengthen the system,” she said.