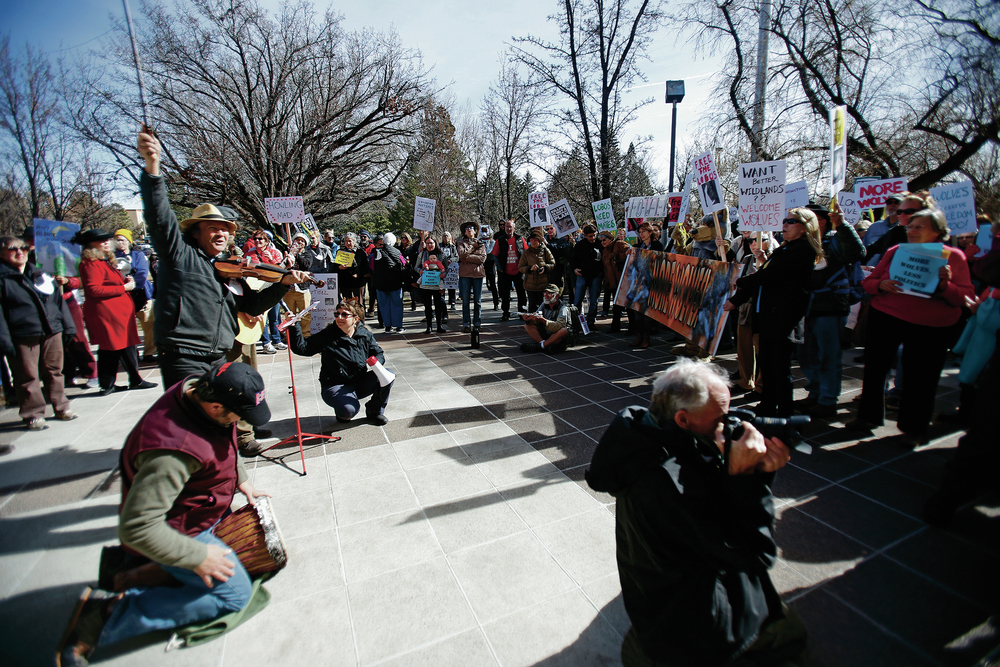 Nelson Denman of Santa Fe, left, with the band The Howling Lobos, performs Wednesday at the state Capitol. About 150 people participated in the Howling Mad rally, asking Gov. Susana Martinez to lift a state ban on Mexican gray wolf releases.

A debate raged Wednesday among dozens of people outside the state Capitol over wolves versus ranchers.

“More wolves,” shouted some people holding signs with slogans like “Free the Lobos.” Their supporters howled.

“No wolves,” shouted another group, some wearing cowboy hats and holding signs that said, “Moove Over Wolves!” and “No More Lobos!”

No one threatened to throw punches, even when things got heated. The competing demonstrators seemed content to outshout each other.

shley Ivins, a rancher from Lincoln County, holds a sign showing opposition to Mexican gray wolf releases during a rally at the state Capitol on Wednesday. About 40 people, mostly ranchers and their families, showed up to support a state ban on Mexican wolf releases, while about 150 people showed up to ask the governor to lift the ban.

The passionate debate over the Mexican gray wolf, an endangered species, has worn on for decades with little sign of a middle ground or a truce, even as a federal appeals court prepares to rule in a case brought by New Mexico against the U.S. Fish and Wildlife Service over recovery efforts for the species.

Casey Spradley, a rancher from San Juan County, said she doesn’t oppose wolves, but she’s concerned about captive-raised wolves being released into the wild, potentially with less fear of humans.

“My concern is they just keep trying to turn out more and more and more wolves,” said Spradley, who does not live in an area of Southern New Mexico set aside by the federal government for recovery of the Mexican gray wolf. “My bigger issue than the release of wolves is that the other side is trying to use the reintroduction of wolves to drive ranchers off of public lands. I believe there is a second agenda.”

Santa Fe artist and musician Bird Thompson argued passionately with some of the ranchers, saying wolves have as much right to be on the landscape as cows.

“As long as I’m breathing, I will fight for wild animals and people to co-exist,” Bird said later.

Craig Ogden, who runs a farm near Loving, said federal wildlife officials have talked about creating a corridor for the wolf to migrate from Interstate 40 to the Guadalupe Mountains near his property. He said he’s concerned about the potential for the wolf to impede efforts he and others are making to restore populations of the lesser prairie chicken, another endangered species in the area.

Mexican wolves were native to New Mexico, Texas, Arizona and Mexico until they were hunted and trapped to near extinction in the 1970s, according to The Wolf in the Southwest: The Making of an Endangered Species, a book that cites wolf hunters and government reports.

Bryan Bird, with Defenders of Wildlife, said the release of captive-bred wolves is imperative to the genetic health of the wild Mexican gray wolf populations. In 2015, there were 97 Mexican wolves in the wild in New Mexico and Arizona. Fish and Wildlife Service biologists have said that’s too few to ensure a diverse gene pool for the species.

An art installation by Larry Shank of Santa Fe aims to raise awareness of Senate Bill 286, sponsored by state Sen. Pete Campos, D-Las Vegas, to ban traps, poisons and snares on public lands. The installation appeared in the state Capitol on Wednesday, Sierra Club Day at the Roundhouse.

About 40 wolf pups were counted over the summer in the wild, but it is uncertain how many will survive the winter.

Since 2015, the New Mexico State Game Commission has denied a permit for the U.S. Fish and Wildlife Service to release captive wolves into the wild in an effort to diversify the gene pool. The state argues the federal agency lacks an adequate recovery plan for the wolf, making it hard for the New Mexico Department of Game and Fish to manage other species.

The federal agency defied the game commission in 2016, saying that under federal law, it didn’t need the state’s permission to release a couple of captive wolf cubs into the Gila National Forest.

The state won an injunction from a federal district judge in Las Cruces in June to stop the Fish and Wildlife Service from releasing any more captive wolves without a permit. The federal agency appealed the ruling. In January, the 10th Circuit Court of Appeals heard the appeal but has yet to make a ruling.

“We are hoping for a decision before the wolf release season begins, which is soon,” said Bird, Southwest Program Director for Defenders of Wildlife, which joined the case in support of the Fish and Wildlife Service.

The case could have broad implications, determining whether the federal government or the state ultimately has the final say in recovery plans for endangered species.

Meanwhile, under a court ruling in a separate case, the Fish and Wildlife Service is supposed to complete a Mexican gray wolf recovery plan by November.

“We’re hoping once that plan is out and it has all the great science, we can finally move forward,” Bird said.