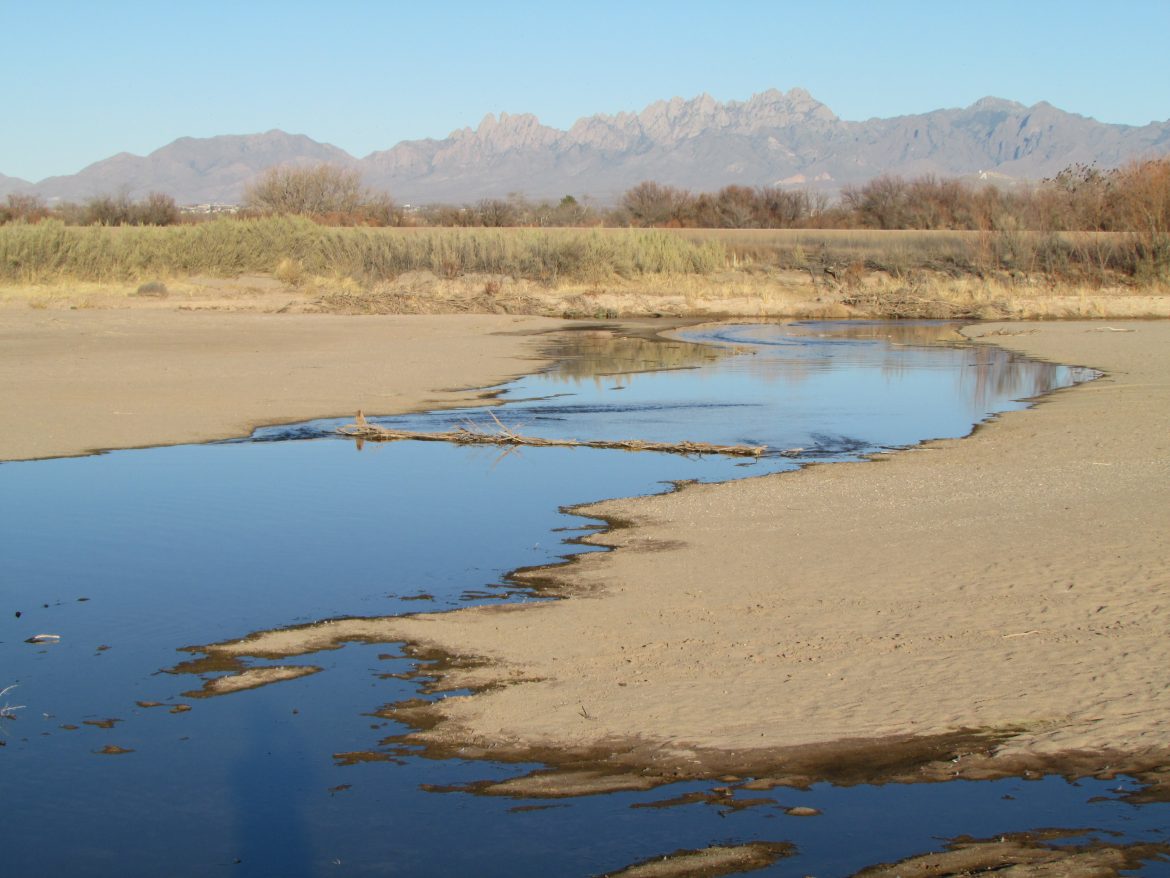 The Rio Grande in the Mesilla Valley, NM. For m

Attorneys for the states of New Mexico and Texas learned yesterday that a lawsuit over the waters of the Rio Grande will head to the U.S. Supreme Court.

For New Mexico, a lot is at stake.

Though Texas also named Colorado in the suit, its real target is New Mexico. Texas alleges that by allowing farmers in southern New Mexico to pump groundwater connected to the river, the state is unfairly taking water from the Rio Grande that, under the 1938 Rio Grande Compact, should be flowing to Texas.

When Texas filed a similar suit against New Mexico about the Pecos River, the case dragged on for almost two decades, and cost both states millions of dollars.

Were Texas to win the Rio Grande case, it could force some southern New Mexico cotton, pecan and chile farmers to stop pumping groundwater. Or, the state could even wind up paying up to $1 billion in damages, according to the Associated Press.

New Mexico filed a motion to dismiss the case, but the U.S. Supreme Court’s special master—appointed to research the issues and report to the court—recommended the court reject that motion and allow the case to proceed.

When the special master’s 351-page final report arrived this week, it didn’t vary much from the draft this summer, in which Gregory Grimsal delivered some grim messages to New Mexico.

The exhaustively-researched report details the history of water agreements and disputes along the lower Rio Grande and indicates Texas has a strong case against the Land of Enchantment.

Anticipating that the case would be moving forward, earlier this year New Mexico Attorney General Hector Balderas announced a new joint defense strategy with the state’s two water agencies, the Office of the State Engineer and the Interstate Stream Commission.

The Attorney General’s office was unable to accommodate an interview this week about the new strategy, but office spokesman James Hallinan issued an email statement to NM Political Report.

“Attorney General Balderas is committed to seeking the best result for New Mexico in the decades-long water litigation he inherited from his predecessors, and will work with the joint defense team he formed with New Mexico’s Lower Rio Grande water users and the Office of the State Engineer throughout the legal process,” Hallinan said. “Attorney General Balderas knows that water is the lifeblood of New Mexico’s unique economy and culture, and now that the court has ruled on the preliminary filings, he can push forward his targeted, technical, data-driven strategy towards the most favorable resolution for New Mexico.”

NM Political Report repeatedly requested to speak with someone from the Office of the State Engineer, which is responsible for groundwater permits, or the Interstate Stream Commission, the agency authorized under state law to negotiate compact disputes.

None of those phone calls or emails were returned.

One entity from the state absent from the list is the Elephant Butte Irrigation District, which sits below the dam in New Mexico, but in the legal world of western water, is considered a part of Texas.

In southern New Mexico today, the Elephant Butte Irrigation District delivers water to about 60,000 acres of fields of crops like pecans, chile and onions.

The district covers more than 90,000 acres, but due to a lingering drought, some of those lands are fallow.

“These are family farms, people who are good stewards of the land,” EBID manager Gary Esslinger told NM Political Report. “It’s a different type of atmosphere here compared with large corporate farms in California that are owned by a bank or an insurance company.”

The irrigation district is different in other ways, too.

To know why, it takes understanding the 1938 Rio Grande Compact and how it divvies up the river’s water among Colorado, New Mexico and Texas.

Annually, New Mexico’s fair share from Colorado is based on streamgage measurements near the state line.

Sending Texas its water is trickier. That’s because New Mexico delivers that water to a reservoir 90 miles north of the state line.

Built by the U.S. Bureau of Reclamation over 100 years ago, Elephant Butte Dam holds back water for what’s called the Rio Grande Project—water the federal government must deliver to farmers in New Mexico and Texas, downstream cities, and Mexico.

As drought intensified over the past two decades, water deliveries became more difficult.

Then, about 10 years ago, Texas complained that it wasn’t getting the water it deserved.

Texas alleged that by allowing southern New Mexico farmers to pump water from underground that is connected hydrologically to the river, the state of New Mexico was reducing the amount of river water available to Texas.

To work out the disagreements, Esslinger explained, in 2008 the Bureau of Reclamation, EBID and the El Paso County Water Improvement District No. 1, an irrigation district in Texas, signed a new operating agreement.

The two irrigation districts decided to share water during tight times, he said, and Texas backed off its complaints over groundwater pumping.

“We had satisfied the farmers in Texas and made it very clear to them that we were part of the project with them, and being the upstream district, we would guarantee them their supply of water,” he said. “And they wouldn’t come after our pumping.”

But the state of New Mexico wasn’t a party to that agreement, and in 2011 then-New Mexico Attorney General Gary King filed a lawsuit against the U.S. Bureau of Reclamation over the deal. That suit alleged that too much water was being given to Texas—water that should have stayed in New Mexico.

In 2013, Texas fired back with its own lawsuit. Since the legal battle involves one state suing another, the case must be heard by the U.S. Supreme Court.

“We would not be in this situation,” said Esslinger of the Supreme Court fight. “We don’t know exactly who was guiding the Attorney General’s decision, and giving him information. We don’t know that, but obviously someone steered him in a direction that was away from what was working.”

Both Esslinger and EBID’s chief counsel, Steve Hernandez, point out that the irrigation district is essentially an island between the two states. Geographically, the farmers are in New Mexico, but in terms of water politics, they’re in Texas.

The special master’s report also recommended that the Supreme Court hear claims by the federal government against New Mexico.

The U.S. government alleges that by allowing farmers to divert water from the river and pump it from below-ground, the state is illegally allowing people to either use water they’re not supposed to, or use more water than they’re allowed.

The U.S. also alleges that New Mexico’s diversions have interfered with its contractual obligations to deliver water to downstream users, including Mexico. Under a 1906 treaty, the U.S. must deliver a certain amount of Rio Grande water to Mexico each year.

Officials with the Bureau of Reclamation would not comment on the litigation except to confirm they had received the special master’s report and were in the process of reviewing it.

Mary Carlson, a spokeswoman for the Bureau of Reclamation’s Albuquerque Area Office, said that the Rio Grande Project is “extremely important to Reclamation as it has provided a reliable water supply to southern New Mexico, west Texas and Mexico for more than a century.”

She added that the project has been key to that area’s economic development, and said the agency will “continue to work with all parties to resolve the issue.”

Water disputes won’t get any easier in the coming years, as the climate continues to warm.

Mountains in Colorado and New Mexico have received heavy snows this winter. But most of the state’s reservoirs, including those on the Rio Grande, remain well below capacity and historical averages.

According to the Natural Resources Conservation Service, Elephant Butte Reservoir is at 11 percent capacity and Caballo Reservoir at 8 percent.

Even with the annual boost from spring snowmelt later this year, the region’s steadily warming temperatures will continue to challenge New Mexico’s water managers in the coming decades.

The southwestern United States is among the most rapidly warming regions on Earth.

Warmer temperatures lead to less water in rivers and streams and higher evaporation rates from lakes and reservoirs.

This is a well-known problem in New Mexico.

In 2014 and ‘15, an interdisciplinary group of university scientists had been studying the impacts of drought on groundwater supplies, rivers and the economy in the Lower Rio Grande. There, they found that groundwater pumping was outpacing the aquifer’s ability to recharge.

Between 1985 and 2010, they found, water users in Doña Ana County depleted the aquifer by 2.5 million feet. They also found that between 2002 and 2015, groundwater pumping in the Mesilla Valley resulted in a 26-foot water-level decline in one location.

In their 2015 report to the legislature, scientists noted that the Mesilla Valley aquifer “may no longer have the capacity to provide a reliable, supplemental supply during extended drought conditions and with the current levels of intensive use of groundwater.”

The New Mexico Legislature did not renew funding for the New Mexico Universities Working Group on Water Supply Vulnerabilities after 2014.