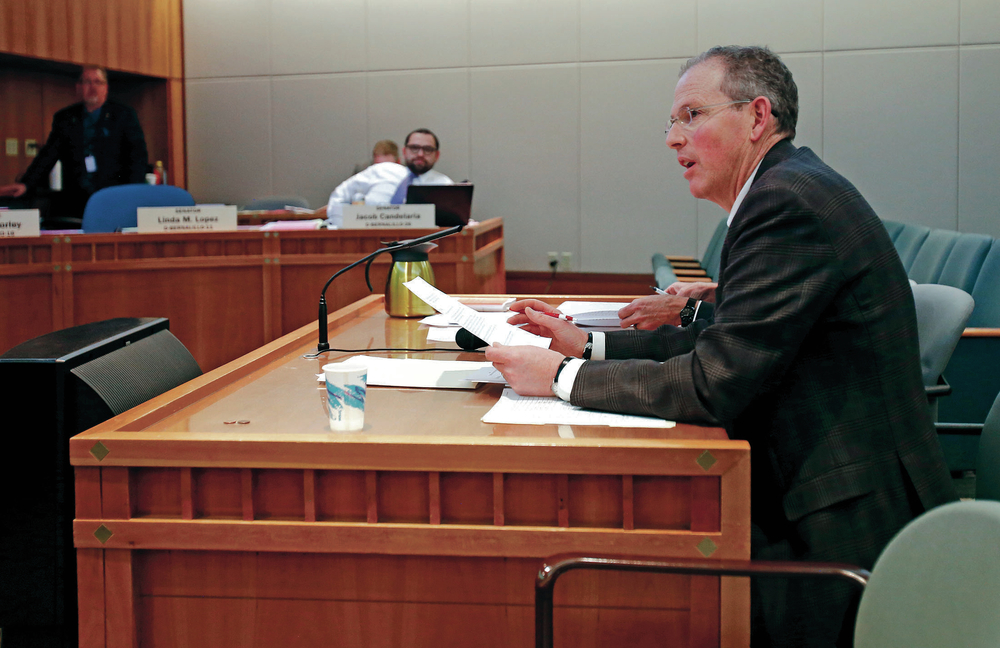 The piece, dated May 25, 2002, serves as a reminder of the time when Republican Gov. Gary Johnson, who had vetoed 700 bills in six years, finally overplayed his hand. One of those vetoes was the $3.9 billion spending plan for the coming fiscal year, a 1.1 percent increase over the previous year.

Johnson, a fiscal hawk, said the plan didn’t go far enough to control the growth of Medicaid. With just a few weeks left in the fiscal year, the Democratic Party-controlled House and Senate called themselves back to Santa Fe for a special session to override the veto and keep the government operating.

“We finally taught Gary Johnson that there are three branches of government,” one Democratic leader was quoted in a separate New Mexican article after both chambers voted overwhelmingly to override the veto. A Republican leader said he was told by a constituent business owner, “Don’t come home without a budget.”

In an interview Friday, Wirth emphasized that the Legislature and Gov. Susana Martinez should be able to come to a budget deal before the 2017 session ends March 18. But he pointed to the Johnson veto override as a lesson in history, saying he is ready to steer the Democrats should things get bumpy.

“The cuts that we have imposed during the 2017 budget year have been devastating,” said Wirth, an attorney in Santa Fe who was first elected 2004. “I just think the future of our state is really at stake and we’re at a defining moment: Are we just going to obliterate key government functions, including our public schools, or are we going to step up and find measures to bring the revenues in we have to have?”

As the 2017 Legislature nears its halfway mark, and with Democrats now back in the majority of both the House and the Senate, one message is coming through loud and clear: There will be no more cuts to government services. The budget slashing during a special session in October and again this year took some $1 billion from public education, universities, courts, law enforcement, tourism, state parks, museums and cultural affairs.

As part of that, the state’s unspent reserve dollars dropped to below 2 percent of spending, a measure watched closely by bond rating agencies. Just two years ago, the reserve funds were over 11 percent. The state has been put on a credit watch, which likely will mean higher borrowing costs for state capital projects and school districts.

Gov. Martinez has reiterated her pledge not to raise taxes during her term, but she has endorsed closing tax loopholes. She signed two measures in October after the special session to limit the abuse of a tax credit for high-wage jobs and another for the hiring of health practitioners. Her proposed budget builds in a small revenue boost for Medicaid by tapping county funds that are used for indigent care.

Still, her message is to cut spending and “right-size” government.

Rep. Bill McCamley, D-Mesilla Park, said that when he traveled the state before the session, he didn’t hear complaints about taxes, but about the need for more education funding, job training and broadband internet.

“Many representatives, myself included, are not going to vote for a budget that takes more money from schools and courts and health care,” he said.

Economists with the Department of Finance and Administration and the Legislative Finance Committee will present a new revenue forecast to lawmakers Thursday. But if not much changes, prior analysts call for a shortfall in fiscal year 2018 of $120 million.

After the new revenue numbers, the budget will move through the House, then to the Senate. But in order to replenish reserves to 5 percent, the $6 billion general fund really needs a bigger boost: about $300 million.

Wirth said about half of that needs to be more than just sweeps of unspent, one-time money. The dollars have to be revenue the state can depend on year after year. “And that’s going to be the big challenge,” he said.

McCamley is among those with proposals to raise money by delaying or rolling back certain tax cuts — not just to corporations but for individuals who pay personal income tax in New Mexico and earn over $75,000, as well as couples who earn over $150,000. Cutting the tax rates was a priority for Gov. Bill Richardson, who sought to attract more well-to-do retirees to the state and position himself for a presidential run.

Other measures would pause a promised cut in corporate taxes, boost the gasoline tax statewide, close the sales tax loopholes for internet transactions and some health care services, and increase taxes on tobacco and e-cigarette products. But while there are bills to raise tax revenue, there are more to reduce them with exemptions, deductions and credits.

Among those are a bill to lessen taxes for small-business owners, working families, health practitioners, education technology and broadband. Lawmakers also want to spend more to attract film and media to the state and boost residential solar projects.

As a well-respected expert on tax policy, Wirth worked with Republicans and helped steer the omnibus 2013 tax package to legislative approval. The measure included both corporate tax cuts as well as expanded film credits. Some of those provisions are now the targets of criticism by both Democrats and Republicans.

Wirth said there are serious discussions about many of the pending bills, but no path forward yet.

In a letter to his constituents, however, he laid out what he sees as some revenue options with the least resistance:

o Increase the fee on the sale of a motor vehicle to 4 percent from 3 percent statewide to raise $50 million a year.

o Increase the capital gains tax rate that was cut under Richardson to 2.5 percent from 8.5 percent. Raising that rate to the same level as the income tax rate, which tops out at 4.9 percent, would bring in $50 million a year.

o Close the loophole in internet transactions for Amazon and other out-of-state companies. Estimates indicate that would raise $20 million to $40 million.

“We’re just in the process of shaping what the new revenues are going to look like,” Wirth said. “It’s a collaboration with the House to come up with what that is. There are no agreements yet, but coming soon …”

Sen. James White, R-Albuquerque, a co-sponsor of the bill to tax all internet sales, along with Rep. Carl Trujillo, D-Santa Fe, said there is growing consensus among Republicans that the measure would help level the playing field for smaller New Mexico businesses. He said they already have a disadvantage in not being able to carry the same volume of merchandise as Amazon and other online retailers.

“It’s a fairness issue,” White said. “Even in New Mexico, big stores like Macy’s are closing. Those taxes should be paid.”

He has had conversations with Gov. Martinez about the bill, he said, but she has not offered her support. The bill has passed one House committee with just two no votes, and White has already talked to one of the dissenters who is now reconsidering.

“That’s the way you have to do it, with one-on-one conversations,” he said. “I talked with one of the no votes, and it’s the right thing to do. Whether we’re going to get a veto-proof vote, I don’t know,” he said.

A Republican leader in the House, Rep. Jason Harper of Rio Rancho, said last week that his caucus was not likely to support stand-alone tax increases. He emphasized that again Friday at a hearing on boosting the tobacco tax when he told sponsors the money might be better allocated to Medicaid or other public health efforts, “instead of shoving more money into the general fund.”

Democrats are also hoping another bill, set to be introduced Monday, also will gain bipartisan support. The measure would extend the gross receipts tax to nonprofit hospitals and health care providers. The sponsor, Rep. Trujillo, vice chairman of the House Taxation Committee, sees it as a way to close another oversight in the tax code.

Trujillo said the measure might bring in $60 million, money that can be used to shore up the reserve fund or help support Medicaid. “It’s more of a fairness issue between hospitals and nonprofits, with some having to pay it now and some not.”

Trujillo also is sponsoring a measure that would amend a law that exempts homeowners offering individual rooms as short-term rentals from paying the local lodgers tax and the state gross receipts tax. He said technology has now changed, and the tax law is obsolete: If hotel businesses and vacation rentals have to pay the tax, so should individual homeowners.

He estimated that bill could bring $4 million to the state, and $2 million to cities in lodgers tax, which is used to support tourism services.

And all that can add up, maybe even help balance the budget so lawmakers won’t have to face another deficit or make more spending cuts.

“We will balance the budget,” Trujillo said. “We will get it done.”

View all Department of Finance and Administration articles →