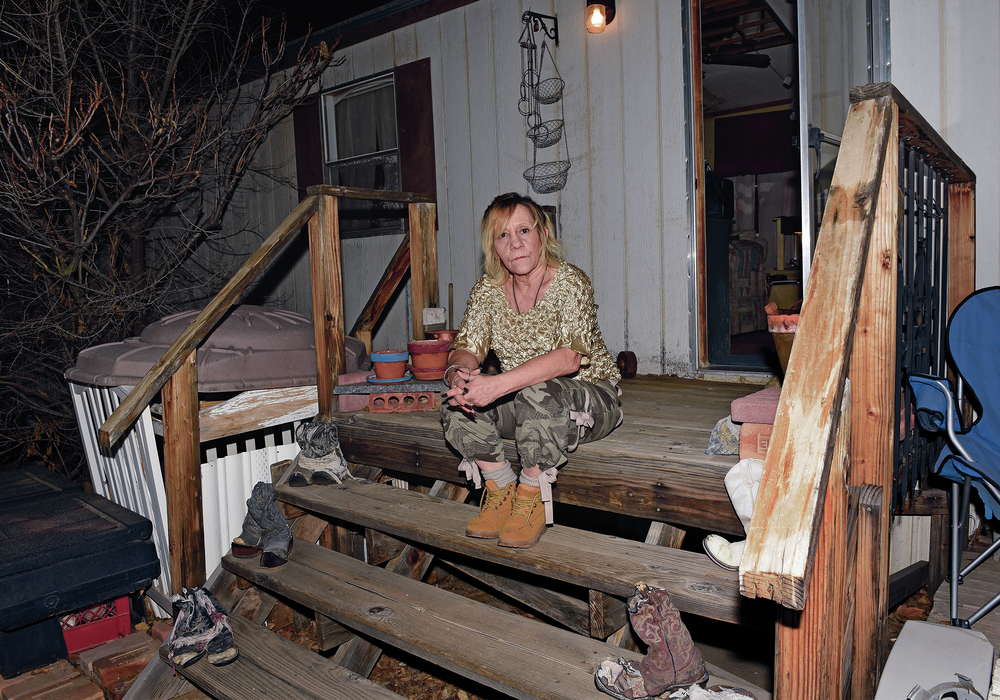 Debbie Pace, 59, sits on the front steps of her Albuquerque home last week. Pace is on a fixed income and receives $33 per month in food assistance.

Debbie Pace says she cries when she goes to the Smith’s grocery store because she “can’t afford anything.”

Pace, 59, of Albuquerque, says she receives just over $730 a month in Supplemental Security Income from the federal program for the disabled and others with little income. She also receives $33 in monthly food stamps.

The $33 in food stamps goes quick, she says. So, she goes to a local church for free food.

Now, Pace, like thousands of other New Mexicans who live on fixed incomes, is faced with having her food stamp benefits cut.

That’s because of the state budget crunch and a proposal to kill a $1.2 million annual state program that supplements federally funded food stamp benefits.

Pace is among some 12,800 New Mexico residents who receive what is known as “minimum assistance” under the food stamp program, known officially as the Supplemental Nutrition Assistance Program. Unlike other individuals and families living in poverty, who can receive anywhere from a few hundred dollars to more than $1,100 each month in food stamps, Pace and others on fixed incomes who are disabled or who are 60 or older qualify for the minimum of $16 per month in federally funded food assistance.

Nearly a decade ago, the state began supplementing that assistance, bringing the minimum benefits to between $25 and $30 a month. But with the state grappling with a budget crisis, the Legislative Finance Committee, made up of Democrats and Republicans in the House and Senate, has recommended doing away with the state supplement.

While the cut may not seem like much, to people living on slim margins, every dollar counts.

Pace says it’s “appalling” that some state officials would even think of cutting the food stamp program for those who cannot work because of disabilities.

She says the state told her she qualifies for only $25 per month in benefits but continues to pay her $33 per month.

The proposal to slash the state supplement to federal food stamp benefits underscores the difficult choices lawmakers face trying to find solutions for the state’s fiscal crisis, which has been exacerbated in recent years by declining oil and gas revenues.

Over the past decade, New Mexico has been dipping into its general fund to increase the minimum food stamp benefit for residents on fixed incomes, said Ruth Hoffman, director of Lutheran Advocacy Ministry-New Mexico, who helped state officials develop the program in 2007.

Gov. Susana Martinez opposes the LFC proposal. A competing budget proposal by the governor would keep the funding in place.

“She championed it,” Hoffman said of the governor’s advocacy for the program since she took office in 2011.

Kyler Nerison, a spokesman for the state Human Services Department, said the program provides important benefits and that the “governor’s budget proposal calls for state government to live within its means — not force the most vulnerable New Mexicans to tighten their belts.”

Hoffman said many seniors receiving monthly Social Security benefits didn’t believe applying for food assistance was worth the trouble if they would receive only $16 per month. But applications for food assistance by those on fixed incomes increased after the state hiked the minimum benefit to $25 per month, according to Hoffman, who said the extra money may not seem like much but can buy eggs, meat and other items.

Sovereign Hager, staff attorney with the New Mexico Center on Law and Poverty, said the proposal to cut the program is a direct result of the state not raising adequate revenue to fund government while giving tax breaks to corporations.

Food insecurity among New Mexico’s elderly, which is among the worst in the nation, has decreased in the past decade with the state’s funding of the program, she said.

“We do not want this to backslide,” Hager said.

Christine Boerner, senior fiscal analyst at the Legislative Finance Committee, said the state was able to use federal stimulus money to launch the program in 2008 during the recession.

Boerner told the Senate Finance Committee this month that the Legislative Finance Committee recommended cutting the program because the state budget crisis makes it “difficult for us to supplement that for the general fund when it’s a federal program, and the federal government has decided what the minimum SNAP benefit would be for these folks who have relatively higher incomes.”

Sen. Nancy Rodriguez, D-Santa Fe, said the $1.2 million the state pays for the program is really not a large amount considering the number of seniors it serves across the state.

“You know, with $25 a month, I think we could do better,” Rodriguez said. “Cutting them with that respect doesn’t seem like the right thing to do. There are priorities here.”