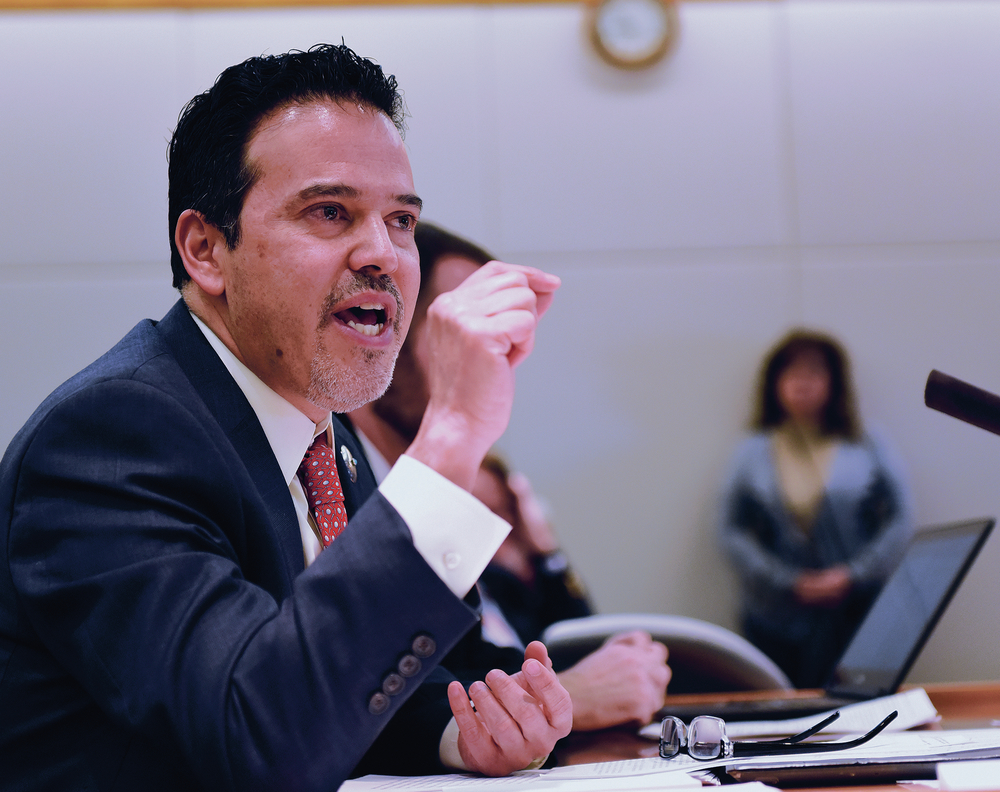 An effort that had broad support to bring in more money to New Mexico government by taxing all internet sales has mushroomed into a measure to raise additional money from hospitals, trucking companies, nonprofit organizations and car buyers.

Democrats say the amendments to House Bill 202, originally an effort to raise $30 million by expanding the gross receipts tax to out-of-state internet transactions, are necessary to restore cash reserves and put the state on better financial footing to avoid further cuts to school districts and another credit downgrade.

With the changes, the bill is now expected to bring in $265 million in ongoing revenue. Some $1 million a year would come from the legislative retirement fund.

A sponsor of the tax bill, Rep. Carl Trujillo D-Santa Fe, said lawmakers have cut spending, both during the 2016 session and again in an October special session. “We’ve swept up under every rock” to find the dollars needed to pay for public services, Trujillo said.

What’s left are tax increases. “This is a difficult thing to do, but I believe it’s the responsible thing to do,” he said.

But Republicans who said they supported closing the loophole for internet purchases voted against the broader tax bill. The measure cleared the House Taxation and Revenue Committee on Monday with an 8-7 vote along party lines. The fiscal year 2018 spending bill, which allocates $6 billion for public education and day-to-day operations, passed the House Appropriations Committee on a 10-6 partisan vote.

Both measures now move to the full House of Representatives.

When Democrats regained control of the House in November, they promised to restore budget cuts made during the last 18 months. The proposals moving forward don’t do that, but they do restore $32 million to the public schools, temporarily increase funding to the courts, judiciary, Corrections Department and two economic development programs.

“This is a step forward toward correcting the inequity and doing it in a way that is targeted,” said House Speaker Brian Egolf, D-Santa Fe.

If all of the measures are approved and signed into law — unlikely considering a pledge by Republican Gov. Susana Martinez not to raise taxes — they would replenish cash reserves to between 3 and 4 percent, more than double the current amount.

Just 20 months ago, general fund reserves, or unspent cash on hand, exceeded 11 percent at $713 million. As energy prices cratered in 2016, available cash dropped to zero and finished 2016 below 2 percent. The depletion of reserve funds was one factor cited by Moody’s Investors Services in cutting New Mexico’s credit outlook, thus increasing the cost of borrowing.

Martinez last fall promised to restore reserves to 5 percent by June. That is unlikely, barring a sharp increase in crude oil prices that would fatten state revenue.

To make the House budget more acceptable to Republicans, Trujillo and others adopted some provisions backed by Rep. Jason Harper. R-Rio Rancho, who has introduced a comprehensive tax reform measure.

Egolf also agreed to demands by Martinez and House Minority Leader Nate Gentry, R-Albuquerque, to redirect dollars going into the Legislative Retirement Fund. That change would reduce retirement contributions from the general fund $4.9 million over three years, making those dollars available for other needs.

But Harper said his measure attempts to reform the tax code but doesn’t bring in a significant amount of new money.

“I’m not one of those zombie Republicans that signed a no-new-tax pledge,” Harper said. “There are lots of things that I like,” he said about the Democrats’ initiative.

He mentioned the online sales tax, as well as expanding the gross receipts tax base to include nonprofits and more health-care hospitals and services. These measure close loopholes and make the tax system fairer, he said. But there’s still too much spending by state government in Harper’s view.

“We are using this crisis to raise taxes. I don’t think we’re going to get bipartisan support on this,” he said.

A larger obstacle for Democrats might be the hospital industry. Many executives, including the New Mexico Hospital Association, asked lawmakers in the past few months to include them in any new ideas for revenue as a way to stabilize Medicaid, the government insurance program that covers four in 10 New Mexicans.

Not-for-profit hospitals and health providers do not pay the state gross receipts tax. For-profit, investor-owned hospitals pay just a portion of the tax, depending on where they are located. The House bill attempts to tax all the health sector at one higher rate.

Economists pointed out that health care has been the fastest growing part of the state economy, yet most of the transactions are not taxed or taxed at a very low rate.

“Over time by not taxing an industry that’s growing faster than inflation the budget situation can get worse,” said Jon Clark, an economist with the Legislative Finance Committee.

But hospital representatives said the bill goes too far too fast. They would support efforts to raise about $50 million for Medicaid. They also asked that that gross receipts tax increases be phased in so they have a chance to plan, and that changes be made to lessen the impact on rural hospitals with a shortage of providers.

Todd Sandman, a vice president with Presbyterian Healthcare Services, a nonprofit and the largest provider in the state, said the tax increase would affect expansion and construction of clinics and hospitals and diminish investments in health-care services.”

Trujillo said he would work with providers to amend the bill before the House floor vote so the new money fully funds Medicaid.

— Extend the gross receipts tax to all hospitals and health-care providers, adding $38 million next year to the general fund and $20 million for city and county governments.

— Increase the excise tax on a vehicle purchase from 3 to 4 percent of the price, minus any trade-in value, raising $49 million for 2018.

— Boost the cost for heavy truck permits, paid annually by trucking companies, to raise $68 million for the general fund.

— Allow the state to collect gross receipts taxes on all internet sales to raise $8 million to $38 million for the general fund and $5.8 million to $20 million for local governments. Amounts would increase over time.

— Extend the payment of gross receipts taxes to purchases by nonprofit organizations to raise $15 million.

— Temporarily suspend contributions to the Legislative Retirement Fund, freeing $900,000 a year for spending on services.

— General appropriations of $6.087 billion, an increase of $8 million from current spending.

— Public schools, spending of $2.69 billion, including an increase in the per-pupil guarantee of 1.3 percent.

— Public safety funding includes a $2 million special appropriation for the Department of Corrections to provide contracting for private prisons and inmate health-care costs.

— Judiciary spending increases 2.5 percent. These include $2.5 million for jury costs and magistrate court leases and $1.1 million more for the Office of the Public Defender.

— Without new revenue, cash reserves are estimated to be $98 million. If HB 202 becomes law, the total could grow.