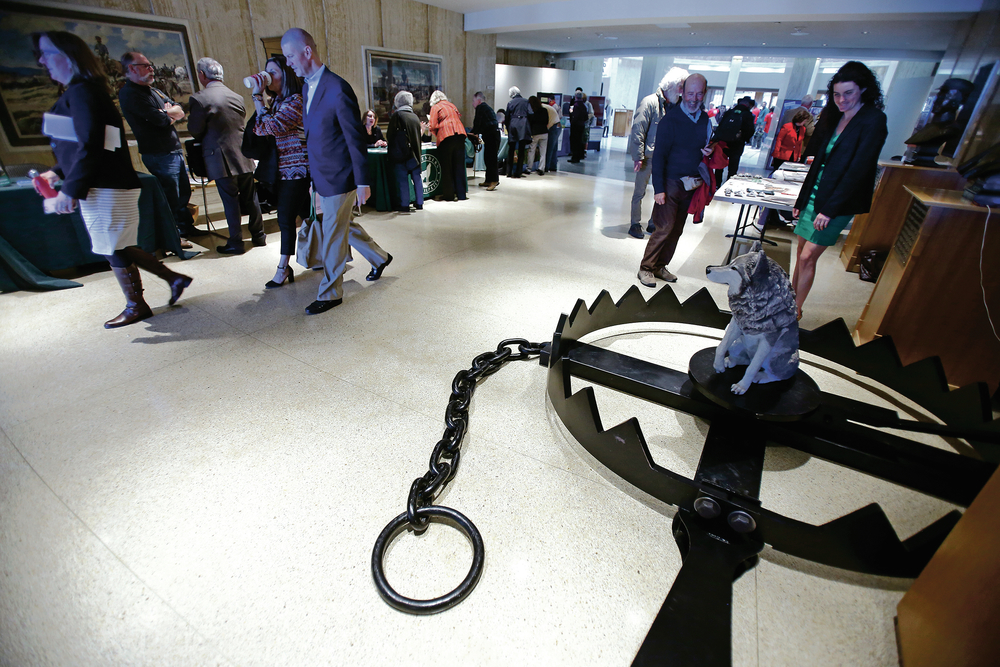 An art installation by Larry Shank of Santa Fe aims to raise awareness of Senate Bill 286, sponsored by state Sen. Pete Campos, D-Las Vegas, to ban traps, poisons and snares on public lands. The installation appeared in the state Capitol on Wednesday, Sierra Club Day at the Roundhouse.

A bill to ban most trapping of animals on public lands in New Mexico probably is going nowhere this year because it’s caught in a clash between ranchers and advocates for animals.

The bill stalled Tuesday in a Senate committee, prompting the sponsor to say he does not expect to reach a compromise in the last four weeks of this 60-day session. That means the practice of trapping in public forests is likely to continue for at least another year.

“I believe it’s going to take much more time than a couple of days,” Sen. Pete Campos, D-Las Vegas, said after the Senate Conservation Committee asked that he rewrite parts of Senate Bill 286.

The bill would outlaw setting traps to capture or kill animals on public land.

Similar proposals in the past have become a flashpoint in broader disputes over the humane treatment of animals, access to public land and New Mexico’s agricultural heritage.

This year seemed no different but Campos is pushing the state Department of Game and Fish to engage in discussion with concerned groups in the hope that animal welfare advocates, state officials, trappers and rural communities can reach an agreement.

Patty Foy, who lives in the Jemez Mountains, recounted the horror of her dog being caught in a trap that was set in the forest. Her dog survived and its paw healed.

But Foy’s dog also broke several teeth on the trap and its cries of pain and terror are stuck in her mind.

“It also destroyed our enjoyment of the public forest,” she told the committee. “This hidden menace benefits a few at the great expense of the many.”

Trappers crammed into the committee room, too, and argued the practice is a part of New Mexico’s heritage that is key to controlling predators they argue wreak havoc on ranchers.

“The history and tradition of New Mexico is one that supports multiple uses of public lands,” said David Sánchez of the Northern New Mexico Stockmen’s Association.

The law would only apply to public lands and include exceptions for state wildlife officials as well as scientific researchers.

But the director of the Department of Game and Fish argued it would still be too restrictive of the agency as well as trappers.

“The department has been supportive of trapping activity for more than 100 years and it brings an economic benefit to the state,” Alexa Sandoval told the committee, referring to the $40,000 the department expects to lose from license fees if the restrictions are imposed.

Democrats on the Conservation Committee also questioned the law’s scope, asking whether the state could really regulate trapping on the Valles Caldera, a national preserve where trapping is expressly allowed. Backers of the bill say they would like it to cover any area where members of the public might go for a hike. But critics say some areas, such as state trust land or land purchased by the game commission, should not fall under the law.

And while a trapper’s first violation of the law would be a misdemeanor, a second offense would result in a felony, giving pause to some Democrats wary of creating new crimes with stiff penalties.

The committee put off a vote on the bill, with Chairman Joseph Cervantes, D-Las Cruces, asking Campos return to the committee later with a version that applies to a narrower area than what the proposal currently defines as public land.

Campos, meanwhile, has tried to push proposals for regulating trapping beyond an urban-rural culture war.

A senator for 27 years with a reputation for being mild-mannered, Campos represents a rural district stretching from Raton to Vaughn. In arguing for his bill, he has depicted a changing New Mexico in which public lands will be key to drawing visitors and new residents.

With the proposal for restrictions having met with criticism from Republicans and Democrats alike on the committee, Campos is pushing a Senate Memorial 100, which would call on the Department of Game and Fish to at least get New Mexicans on different sides of the trapping debate to discuss a solution.

Correction: The other piece of legislation on trapping state Sen. Pete Campos is sponsoring is Senate Memorial 100, not Senate Resolution 100.

View all Department of Game and Fish articles →