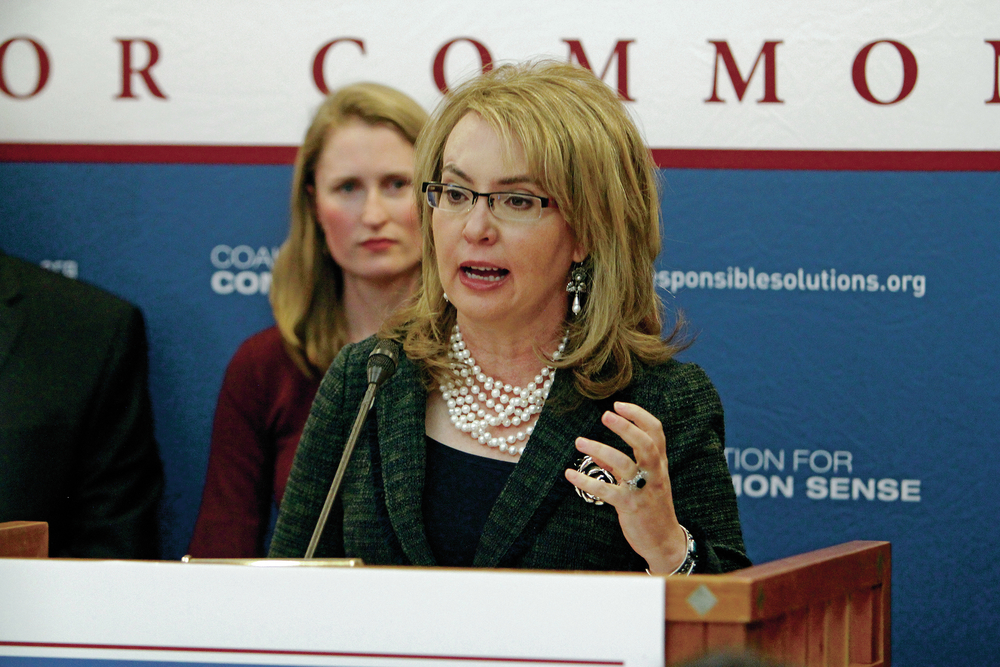 Gabrielle Giffords, a former Arizona congresswoman who was shot in the head six years ago during a rampage in Tucson that left six people dead, speaks Wednesday in support of New Mexico gun-control measures during a news conference at the Roundhouse.

Partially paralyzed and speaking in just a few simple sentences, a former U.S. congresswoman shot in the head six years ago during a rampage that left a half-dozen people dead delivered the most high-profile endorsement yet of two gun-control bills being considered in the New Mexico Legislature.

“I’ve seen great courage when my life was on the line,” Gabrielle Giffords told a crowd of reporters and gun-control advocates at the Capitol on Wednesday. “Now is the time to come together — to be responsible. Democrats, Republicans, everyone.”

Giffords’ appearance at the Legislature demonstrated the campaign for gun control is not letting up during the final weeks of the session. But with one major bill stalled in committee and debate over the budget consuming greater energy as the Legislature nears adjournment, advocates still have an uphill fight ahead of them.

With her visit, Giffords and other gun-control advocates also signaled they are bringing even more resources to bear on their campaign.

A Democrat who previously represented southern Arizona, Giffords has emerged as a leading advocate for gun control after a man armed with a Glock 19 handgun shot her in the head and killed a member of her staff, a federal judge and four other people during a community event in Tucson on Jan. 8, 2011. The gunman, Jared Loughner, was diagnosed with schizophrenia and is serving seven consecutive life terms in prison for the attack, one of many mass shootings around the country that heightened calls for gun control.

Giffords maintained a low profile in the first years of her recovery but has since founded an advocacy group, Americans for Responsible Solutions, to push gun-control policies. The nonprofit organization has spent more than $2.2 million on Democratic candidates and gun-control campaigns during the last three years, according to data maintained by the National Institute on Money in State Politics. Giffords’ organization also has given $5,400 to the New Mexico Senate Majority Leadership Fund, a Democratic group.

Giffords is throwing her support behind two pieces of legislation in New Mexico with a newly launched group, the New Mexico Coalition for Common Sense. The coalition has the backing of local organizations such as New Mexicans to Prevent Gun Violence and law enforcement officials such as Bernalillo County Sheriff Manuel Gonzales III and Santa Fe District Attorney Marco Serna as well as other advocates.

Giffords is supporting New Mexico House Bill 50, which would require virtually all buyers of firearms to undergo a background check, even if purchasing online, at a gun show or from a friend. Proponents say the bill would close a loophole that allows criminals and mentally ill people to get their hands on firearms without any accountability.

Critics counter that such a law would only burden law-abiding gun owners while doing nothing to prevent crime.

“More gun-control laws will cost New Mexicans time, money and freedom, and do nothing to make them safer,” a spokeswoman for the National Rifle Association said Wednesday.

The bill has drawn some of the largest and most impassioned crowds of the 60-day legislative session. Despite a high-profile and well-funded campaign by the national gun control advocacy group Everytown for Gun Safety, House Bill 50 is stuck in a legislative limbo.

Though committees had approved the measure, its sponsor, Rep. Stephanie Garcia Richard, D-Los Alamos, announced last week she would not push the bill to a vote on the floor of the House of Representatives but instead take it back to committee for what she described as more work.

“As of right now we’re letting the Senate see what can be done to gain consensus there,” House Speaker Brian Egolf, D-Santa Fe, said Wednesday.

The new coalition Giffords helped launch on Wednesday is also rallying around Senate Bill 259, which would restrict those accused of or charged with domestic violence from accessing firearms. That measure is awaiting a vote in the Senate Judiciary Committee.

Unclear is how the coalition will flex its lobbying muscle. No legislators appeared at Giffords’ event, and aides to leaders in both parties said Giffords had not met with senior lawmakers. Robin Loyd of the advocacy group Americans for Responsible Solutions said there were no immediate plans to speak with the governor, who could sign or veto the gun-control bills if legislators approve them.

But in rallying advocates, Giffords showed gun control is an issue that has not gone away during this session.

“Be bold, be courageous,” she said. “The nation is counting on you.”