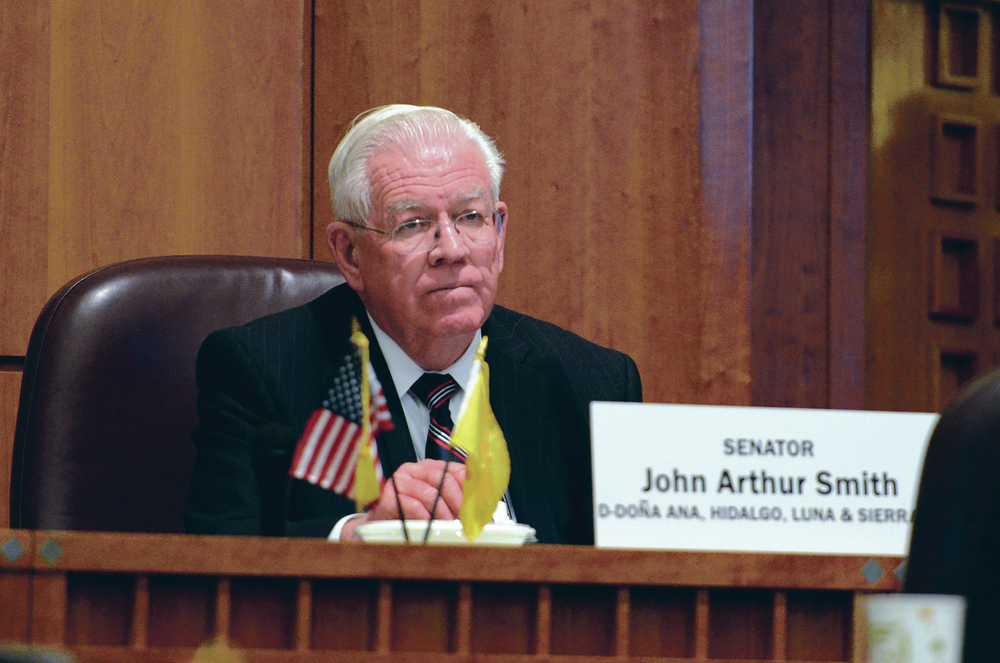 Sen. John Arthur Smith said any vetoes Martinez makes at this stage will force legislators to cut the budgets of public schools and health care as they follow the law to pass a balanced budget.

“We’re out of places to find additional dollars,” Smith, D-Deming, said during a brief speech on the floor of the Senate.

He spoke hours after the House of Representatives approved a $6.08 billion budget and then moved it to the Senate for consideration. The budget crafted by the Democrat-controlled House would increase state revenue by some $250 million with tax and fee increases.

Smith said the Legislature will have to cut another 5 percent to make ends meet unless Martinez, a Republican, is willing to compromise with Democrats on taxes. Then, jabbing the governor, Smith said: “We no longer can legislate by polling.”

His remarks drew the same tart response from Martinez’s press aide that had been used earlier in the week.

“The governor is not going to accept a budget so disconnected from New Mexico values,” said Mike Lonergan.

But if that stand continues, Smith said, the state’s fiscal crisis will prompt further cuts as legislators look to balance the books and replenish depleted cash reserves with less revenue than the government collected last year.

“We’re gonna have to build reserves out of the hides of public education and health care,” said Smith, chairman of the Senate Finance Committee.

Despite the caustic exchanges, Democrats and Republicans do not seem too far apart on an agreement, and the governor has been quiet on some of the tax proposals floated so far this session.

The budget passed the House only on a party-line vote after Martinez’s spokesman denounced it as a “political play that hurts families, kids and public safety.” Republican House members did not push any major changes. Instead, Republicans have been backing some tax proposals they opposed just a few months ago.

Still, Senate Majority Leader Peter Wirth said Thursday he feared Democrats’ proposal for $250 million in new revenue would be met with a demand for zero from the governor. Wirth indicated, however, that the Legislature has not run into that kind of steadfast resistance.

The proposed budget, House Bill 2, is connected to a separate piece of legislation to raise more revenue. Democratic legislators have drafted House Bill 202 to balance the state’s accounts and boost reserves raided by lawmakers as oil prices plummeted.

The budget bill itself calls for spending only $8.3 million above current levels. But Democrats have said that, without socking away more cash in reserves, the state risks another downgrade in its bond rating. That could increase the cost of borrowing money for public projects.

But the budget as drafted could stave off further cuts to public schools that saw reserves slashed earlier this session. And it would increase funding for the state court system, public defenders and the Corrections Department.

The revenue proposals include collecting tax from major internet retailers such as Amazon, which do not pay gross receipts tax on merchandise sold to New Mexicans. HB 202 also calls for closing a loophole to charge gross receipts tax on nonprofit hospitals and health care providers, boosting permit fees for heavy trucks, raising the tax on the sale of a car or truck and diverting some money from the retirement fund for legislators.

The Senate will push to go further. Some Democrats are calling to raise the tax on gasoline by 10 cents per gallon as well as the tax on cigarettes and the personal income tax on the wealthiest New Mexicans.

Smith’s comments foreshadowed the debate over those measures and a showdown with a governor who was once something of an ally to Smith on budget issues. Both are conservative on fiscal matters, though Smith has grown louder in calling to raise taxes as the state’s budget problems have deepened.

But both the House and Senate have new leaders, changing the dynamic between each chamber and the Governor’s Office. That also has left Smith with a diminished role in some debates.

Now, as the Senate takes up the budget and accompanying tax proposals, with each first heading to the Finance Committee, Smith’s comments signaled that many Democrats in both chambers will push harder for new revenue to avoid more cuts.