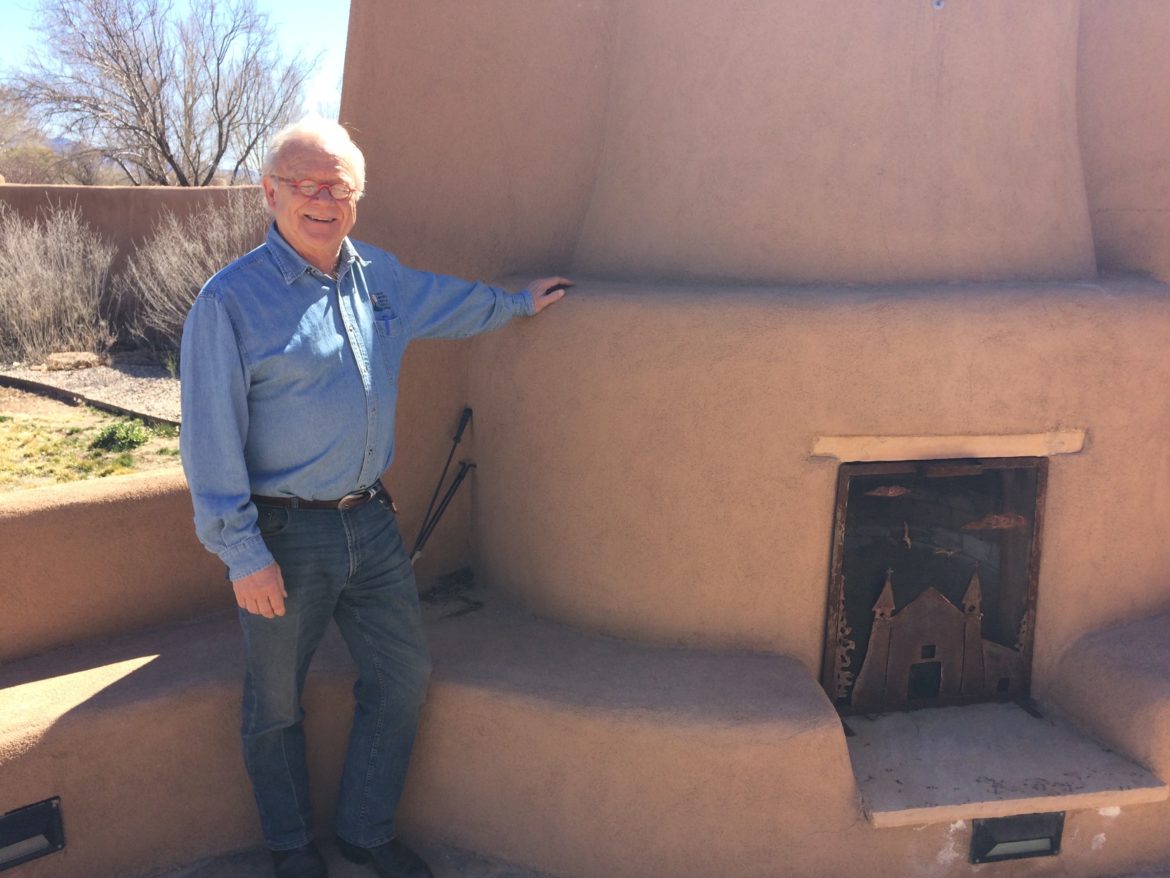 Ron Curry, at his home in New Mexico.

By 11 a.m. Central Time on Jan. 20—Inauguration Day—Ron Curry had cleared out of his Dallas office at the U.S. Environmental Protection Agency.

“You know when you walk in the door that if you serve the full term, you’re expected to walk out the door when the new president is inaugurated,” said Curry, who served as EPA’s Region 6 administrator for just over four years. “I’ve known all along that would be the case.”

Before his time with the EPA, Curry served as secretary of the New Mexico Environment Department (NMED) under Gov. Bill Richardson. A political appointee, Curry left his positions knowing, in both cases, the incoming administrations had a bone to pick with environmental regulators.

For nearly four years, Curry and his wife, former New Mexico Democratic state Sen. Cynthia Nava, lived on the 19th floor of an apartment building in downtown Dallas. Curry walked to work most days and Nava, retired from her job as superintendent of Gadsden School District, spent a year taking classes at Le Cordon Bleu College of Culinary Arts.

Curry got to know Dallas Mayor Mike Rawlins while working on air quality issues. He also knew one of the five police officers killed during an ambush in downtown Dallas in July 2016 that made national news.

“We felt at home there,” said Curry, who is originally from Hobbs, New Mexico. “We would have never guessed that when we went down there.”

Now, the two have returned home to New Mexico. Curry joked that since Nava supported him during his tenure at the EPA, he’ll now work as her sous chef. Beyond that, he’s not saying what his plans are next.

Just weeks after he left EPA, NM Political Report sat down with Curry at his home—with his dog Banks sprawled out next to the dining room table—to talk about his work at EPA and NMED, the Gold King Mine spill and how regulatory agencies serve their communities.

The EPA is already a different place from when Curry was there, serving under President Barack Obama.

President Donald Trump chose Oklahoma Attorney General Scott Pruitt to lead the EPA. Pruitt previously sued the EPA, including over the Clean Power Plan, has close ties with the oil and gas industry and has questioned the link between climate change and human activities. Since Pruitt’s confirmation, the Trump administration has announced plans to eliminate 3,000 EPA jobs and cut the agency’s budget by $2 billion.

Both of New Mexico’s U.S. Senators voted against Pruitt’s confirmation.

At the EPA, Curry oversaw work in New Mexico, Texas, Oklahoma, Louisiana and Arkansas. And he does have some concerns for New Mexico in the coming years. In particular, he’s worried about environmental justice issues and EPA’s relationships with tribes.

In Region 6, he pointed out, there are 66 federally recognized tribes, about a third of which are in New Mexico.

EPA helps tribes set their own pollution standards while providing funding and expertise.

The federal agency also provides funding to state agencies. Last year, New Mexico received more than $36 million from the EPA. About half—more than $18 million—went to NMED.

EPA has also been the driving force to clean up Superfund sites in the Grants Mining District.

“I had worked out there when I was [Environment Department] secretary, and I knew some of the people out there,” Curry said, acknowledging that the cleanup at places like the Homestake Mining Company site near Milan has been “excruciatingly slow.” That former uranium mill site, operated by two different private companies beginning in 1958, was decommissioned in the 1990s and has been contaminating groundwater below the site for decades.

“Our emphasis was on how the community was being impacted cumulatively in the long-term, and the job is not over—there’s still a heck of a lot to do out there,” he said. “I know the community is concerned that efforts will be stopped out there, and we certainly tried to put as much emphasis as we could while we were in a position to do so.”

Curry mentioned the Chevron Questa Mine (formerly Molycorp) site as another important Superfund site. Open pit mining occurred at that molybdenum mine from 1965 until 1983, and cleanup is ongoing.

According to NMED’s website, New Mexico has 20 Superfund sites. There are also at least 15,000 abandoned mines, according to the New Mexico Energy, Minerals and Natural Resources Department. In cases where companies no longer exist or have declared bankruptcy, the federal government is typically responsible for cleanup.

“The 800-pound gorilla in this discussion is Gold King Mine,” Curry said, adding quickly, “EPA took full responsibility for that.”

In August 2015, contractors working for the EPA were investigating water releases from Gold King Mine near Silverton, Colorado. While excavating around the mine, they caused a large  spill—and about three million gallons of contaminated water poured into Cement Creek, a tributary of the Animas River. The Animas River flows into New Mexico, and then joins the San Juan River near Farmington. The San Juan flows through the Navajo Nation and eventually joins the Colorado River.

Nearby landowners, boaters and anyone who saw the Animas River that August reacted in horror as its waters turned bright yellowish-orange, laden with lead, arsenic and cadmium.

Speaking today, Curry said that there was “bad communication” between EPA Region 8, based in Denver, and his office.

“I was not made aware of the spill until 24 hours later,” he said. “The state of New Mexico was made aware of it prior to the time we were.”

New Mexico officials, including then-NMED Secretary Ryan Flynn, were angry they hadn’t found out about the spill more quickly, and blowback against EPA was swift, from politicians on all sides.

Over a year later, the state of New Mexico continues to dispute the federal agency’s data on the spill and its impacts. At a water management conference last summer, and elsewhere, NMED’s chief scientist called EPA’s data “misleading” and “hypocritical.”  And while NMED’s Dennis McQuillen acknowledged that Region 6, where Curry worked, was more supportive to the state than officials in Region 8 or Washington, D.C., he said that as an agency, EPA was not “providing a consistent, technically sound and unbiased response to the spill.”

Curry was a little surprised by “some of the fire that was being pointed at us,” he told NM Political Report.

Democrats and Republicans alike were also angry when, in January, the agency announced it could not pay claims of more than $1 billion in economic damages caused by the spill.

“If you want to find a positive light in all of this, there was more attention brought to what’s going on in that river,” Curry said. In the aftermath of the Gold King Mine spill, as agencies collected water quality data, the EPA found that upstream of its confluence with the Animas, the San Juan River had higher levels of heavy metals than people had previously realized. “Hopefully, there will continue to be more investigations of that,” Curry said, adding that the spill also raised the profile of the General Mining Act of 1872.

Congress passed that law to promote settlement and development of western lands by Anglo-Americans. It allowed companies to mine on public lands without paying royalties and without promises to clean up mines once they’ve been abandoned.

But, Curry said, “Gold King is going to be a black eye for the agency going forward no matter how the court’s dealings end up.”

When the EPA announced Curry as the Region 6 administrator in 2012, David Martin was NMED Secretary and Flynn was general counsel at the department.

“I think they were surprised,” said Curry. “There had been so much animus between Governor Martinez and Governor Richardson, especially focused in the Environment Department.”

During her 2010 campaign, Martinez promised she would overturn many of the rules and initiatives Curry had championed. But Curry said he reached out to Martin immediately and made it clear he wanted EPA and the state to work together.

The first issue they worked on was one Curry was familiar with already: cutting pollution from the San Juan Generating Station, a coal-fired power plant about halfway between Shiprock and Farmington. Curry had worked on that while at NMED, and even prior to that for PNM, which owns the plant. In the end, the three parties—NMED, EPA and PNM—worked together and PNM agreed to shut down two of the four coal-fired units at the plant.

Ron Curry, with the EPA, and then-NMED Secretary Ryan Flynn in Santa Fe in 2013

“That was a success that both sides talked about for a long time and used as an example of how to do things,” Curry said. “It took a lot of effort on both sides. And we continued to build on that relationship, based on the fact that we had proved we could do something at the San Juan Generating Station.”

Despite Gold King Mine, Curry said that he maintained a strong relationships with NMED’s current secretary, Butch Tongate.

NM Political Report reached out to NMED’s communications director, soliciting comment from Tongate, who also worked with Curry at NMED. We did not receive a response before publication.

Looking back to NMED

While at NMED from 2003-2010, Curry said the agency was targeted for being “heavy handed.” But, he said, “I happened to be fortunate enough to work for a governor who was really supportive of what we did and really believed in protecting and preserving the environment.”

He joked that while he was at NMED, business entities never came for a friendly chat.

According to Curry, he saw evidence of an environmental regulation harming jobs in the state only once. It included a twist, however, on the traditional narrative that regulations kill jobs.

As Curry recounts, up until the early 1990s, most of the state’s gas stations were owned by large companies.

“They saw some environmental regulations coming down the pike and started saying to mom and pop: ‘We’ll sell you this gas station at 10 cents on the dollar,” he said. “And mom and pop would say, ‘Yeah, that’s a good idea.’”

Then, when the underground storage tank regulations came along—meant to protect groundwater from leaky tanks—he said, many of those independent owners ended up going out of business.

Curry recalls two politicians from eastern New Mexico complaining to him that environmental regulators had run rural service stations out of business.

“He had a point there, they didn’t have any gas stations left,” Curry said. “The oil companies had divested themselves by selling them to mom and pop—and mom and pop, sitting out in Melrose, New Mexico, or wherever else, they couldn’t afford $15,000 or $20,000 to get into compliance and build all sorts of protections around their oil tanks that may or may not be leaking.”

There was, he noted, a fund to help pay for compliance.

Regardless, agencies like EPA have become easy targets for critics over the years, in part because of poor messaging, he said.

“If you stop and think about what we do, the agency in effect is a public health agency,” he said. “Because the actions that you take eventually have a direct impact on public health, whether it’s the Clean Power Plan or making sure my septic tank here in Corrales is inspected and installed correctly.”

Until there’s a problem, people often don’t realize the importance of those agencies.

“And nobody else is there to help them,” he said. “Environment agencies are important to make sure that the communities have a place to go.”