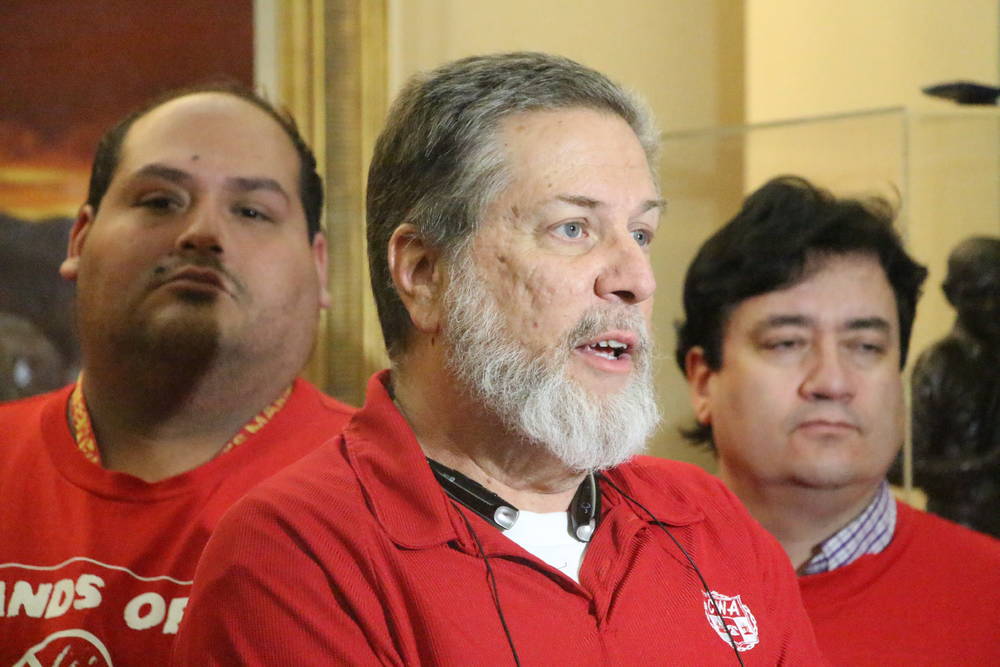 Daniel Secrist, executive vice president of the Communication Workers of America Local 7076, spoke at a news conference Saturday at the Capitol, asking Democrats to be more aggressive in budget negotiations.

The New Mexico Legislature came closer Saturday to sending Gov. Susana Martinez a budget for the upcoming fiscal year, as well as a $300 million tax package.

The Senate passed House Bill 2, as well as HB 202, which could raise more than $300 million — depending on which new taxes and fees are signed and which are vetoed by Martinez, a Republican who repeatedly has vowed never to raise taxes.

Both pieces of legislation will have to return to the House of Representatives for final passage because of amendments made in the session.

“This budget and revenue package reflects the desire of the legislature to produce a plan that supports New Mexico families and makes practical long-term spending decisions necessary for the success of our state,” Senate Finance Committee Chairman John Arthur Smith, D-Deming, said in a news release.

“By raising new recurring revenue,” Smith said, “we were able to prevent dramatic cuts and strengthen our support for critical state services like public education all while leaving an appropriate level of reserves necessary to reassure bond companies that we have financial stability needed to protect our credit rating.”

“By the actions we are taking, we are maintaining a responsible form of government that will continue to operate in the state in a smooth fashion,” Ingle said in a written statement. “These were difficult decisions we made as best as we could as we continue to be faced with severe financial challenges. … Without revenue nothing can happen, when the State Treasurer says the state cannot issue any more checks, difficult decisions have to be made, we stood up tonight and we made them.”

Some of that new revenue could be dead on arrival.

“As the governor has said repeatedly, she opposes raising taxes,” Martinez spokesman Chris Sanchez said after the votes. “She has presented various options to the Legislature that total up to $300 million in savings and is encouraged by recent conversations with lawmakers.”

For instance, the governor has vowed to veto any gasoline tax increase. Such an increase is included in the tax measure passed by the Senate. She’s also opposed to a provision that would delay the implementation of scheduled corporate tax cuts. Delaying those cuts would mean another $12.7 million for the general fund.

The tax bill passed on a vote of 34-4. Four Republican senators voted against it.

The vote for the budget was 33-8, with six Republicans and two Democrats voting against it.

Leaders of a union representing some state employees said at a Saturday news conference before the vote that Democrats should be more aggressive in seeking more revenue — even if the governor is opposed.

“We need new revenue,” said Daniel Secrist, executive vice president of the Communication Workers of America Local 7076. “We have staffing shortages in every agency where we work.”

But a leader of one liberal group praised the budget and tax package. “We are very pleased that the legislature recognizes the harm of last year’s budget cuts and the seriousness of the current budget crisis,” said Bill Jordan of New Mexico Voices for Children.

“This budget avoids the kind of painful cuts to schools and health care that occurred the past couple of years,” he said. “… We hope that Gov. Martinez will sign these bills and recognize that we can’t cut our way to prosperity.”

Sen Craig Brandt, R-Rio Rancho, said he couldn’t vote for the bill because he did not have a chance to read the 167-page document.

Smith said the current version of the bill had been posted online nearly 24 hours before the hearing.

In the budget bill, the Senate added $6.5 million to the Public Education Department for early reading initiatives and another for $9.4 million for targeted education reforms sought by Cabinet Secretary Hanna Skandera.

Spending on elementary and secondary education would total $2.7 billion from the general fund, an increase of $13.3 million from the current fiscal year.

Spending on higher education, however, would go down by about 1 percent, Smith said.

Among the other budget increases in the Senate bill:

o $150,000 to conduct a statewide inventory of buildings and property for a master plan.

o $750,000 for increasing payment and credit card security at the Department of Finance and Administration.

o Legal fees of $1 million for the Public Education Department; $700,000 for the state engineer and attorney general for water rights lawsuits; $700,000 in costs related to a lawsuit over food stamp eligibility.

o The Senate also has kept funds allocated by the House that would increase job training and economic development programs, but lowered the new money to $17 million.

Medicaid spending by the state will be $916 million, about the same as this year.

The state’s cash reserves remain at an all-time low in the state — $77 million, or just 1.3 percent of the budget — according to a new estimate released Friday. If the tax and budget bills become law, the reserves could increase to more than 3 percent for fiscal year 2018.

As far as the tax bill goes, in addition to higher taxes on gas and diesel, there would be new taxes for hospitals. The cost of permits for heavy trucks would rise, as would the tax on vehicle purchases, which would increase from 3 percent to 4 percent of the purchase price.

Under HB 202, the state would start taxing purchases made over the internet. Perhaps in anticipation of this move, earlier this month popular online retailer Amazon.com announced it soon would begin collecting state tax on New Mexico sales.