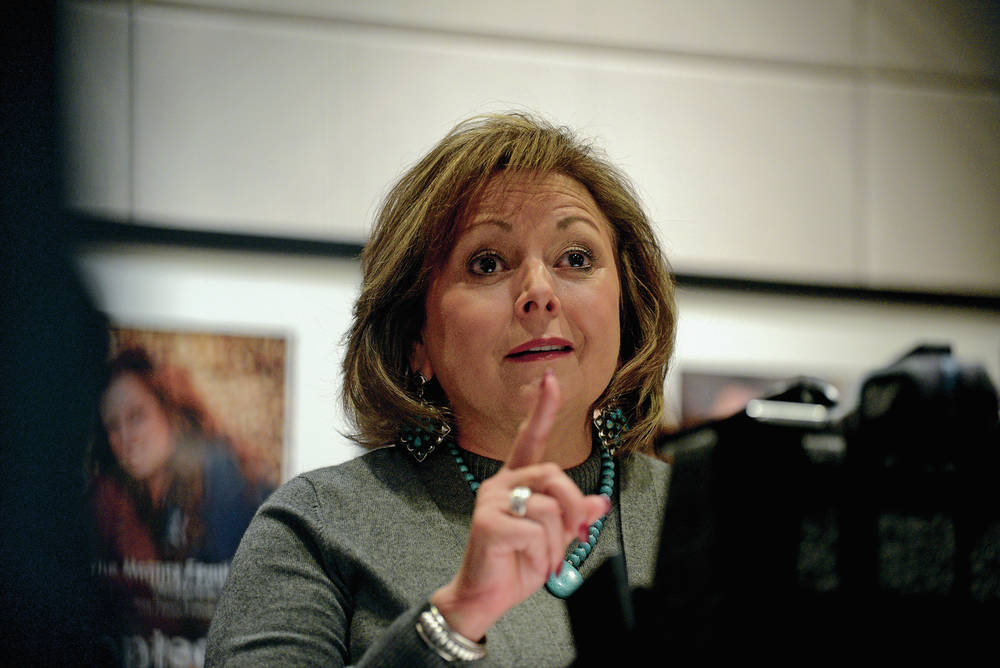 Gov. Susana Martinez addresses the news media at the Capitol at the close of the 2017 legislative session, which ended at noon Saturday.

A legislative session that began 60 days ago with calls for bipartisanship to balance the state’s quavering budget ended Saturday with bitterness, acrimony and a promise by Gov. Susana Martinez to bring lawmakers back for a special session to craft a new budget without any tax increases.

It would be the third year in a row that Martinez has called lawmakers into a special session to address budget shortfalls and other financial issues, illustrating the continuing discord between the Republican governor and Democrats in the Legislature. This session’s disharmony was particularly notable because it included skirmishes between the governor and some lawmakers of her own party.

“Many in the Legislature failed to do their jobs this session,” Martinez told reporters shortly after lawmakers adjourned. “They actually squandered 60 days and cowed to special interest groups. It was reckless and it was irresponsible, and now we are staring down the path of a government shutdown.”

Martinez said her administration will consider closing nonessential state services, such as museums and parks, and might furlough government staff to save money until legislators send her a budget she can support.

Democrats countered that the state’s budget crisis is one of the governor’s own making.

“We’ve given the governor all the tools to balance the budget and the revenue to do it,” said Sen. John Arthur Smith, the Deming Democrat who chairs the Senate Finance Committee.

The governor, though, insisted lawmakers approve a budget that does not rely on raising taxes.

The House sent Martinez a $6.1 billion budget Friday. Democrats called it responsible because it increases funding for public schools by one-half of 1 percent, though it also cuts higher education by 1 percent. But the budget includes $128 million in spending beyond what the state is projected to raise in revenue.

That means the budget relies on the governor accepting a separate bill that would boost state revenues by about $350 million through tax increases on hospitals, gasoline, diesel fuel, the sale of vehicles and internet sales. The bill also would delay implementation of a corporate income tax cut, redirect money headed to the legislative retirement fund and increase permit fees on truckers.

Martinez described the proposal, House Bill 202, as “the easy way out.” She called on lawmakers to instead pass broad tax reform, pointing to a Republican bill that passed the House but got bogged down in a Senate committee amid opposition from various corners, including nonprofit groups and a range of industries that stand to lose out if certain loopholes are closed or exemptions are ended.

“I will never allow lawmakers to raise taxes on our families to bail out big government,” Martinez said.

Democrats said the governor’s talk of a government shutdown is unsupported by facts because the state has at least enough money in reserves to manage until a new budget and revenue measures take effect in July.

And leading lawmakers maintained that the budget they approved was fairer than the governor’s plan.

Martinez’s proposed budget was based on cutting the state’s contributions to the pensions of public employees, including teachers. Smith said her idea did not have any support in the Legislature because it would have amounted to cutting pay for tens of thousands of workers.

Smith said if Martinez is going to call a special session, at a cost of about $50,000 a day, she must first present a realistic budget plan.

“When we’re hurting for taxpayer dollars, the last place we need to be is in special session,” he said.

House Speaker Brian Egolf, D-Santa Fe, said legislators had worked cooperatively with Martinez and her staff on the state’s financial crisis, so he was surprised when her chief of staff signaled Friday night that she would reject the budget and call a special session.

“We were ready to send the budget and the revenue package up [to Martinez] on Monday of last week. At her request, we delayed,” he told reporters Saturday afternoon.

Egolf added: “She had her senior staff down visiting with us on a daily basis. I felt communication was very good. … We hope that she’ll realize what we did was done with the effort to try to meet her in the middle.”

But the governor described Democrats as taking a “my way or the highway approach.”

Balancing the budget for the current fiscal year, which ends in June, consumed the legislative session’s first two weeks. With no time to impose and collect new taxes, lawmakers settled instead on cutting money from the savings accounts of school districts, various government accounts and a fund intended for fire departments. The unpopular measures left some Democrats vowing not to accept any further cuts and instead push the governor to raise revenue.

And as the session entered its final week, Martinez unleashed a flurry of vetoes — some without explanation — and accused lawmakers of wasting time.

Martinez herself was hit with the same charge.

Sen. Cliff Pirtle, R-Roswell, center, along with his wife and children, greets with Sen. Ron Griggs, R-Alamogordo, following the close of the 2017 legislative session on Saturday at the state Capitol.

The governor called lawmakers into a special session last fall to address a shortfall in the state budget. She initially said she wanted a one-day special session to solve the state’s budget problems without running up costs. But then, with the session occurring about a month before the general election, Martinez expanded the agenda to include crime bills, including a proposal to reinstate the death penalty.

Smith said line-item vetoes Martinez made to the budget adjustments simply delayed the inevitable need for more cutbacks that legislators had to make this year.

In addition to last year’s special session, Martinez also called legislators back to Santa Fe in April 2015 to vote on a plan for public works spending. That session ended in a day.

Martinez did not specify Saturday when she would call the next special session, only saying it would be soon.

A New Mexico governor has not vetoed an entire budget since Gary Johnson scrapped a spending plan in 2002, his final year in office.

The Legislature called itself back into session to override Johnson’s veto. That won’t happen this year because House Republicans are especially loyal to Martinez. Just last week, after voting overwhelmingly for a bill to give teachers more use of sick leave without a penalty on their performance evaluation, House Republicans all declined to override Martinez’s veto of that bill.

This was the governor’s last 60-day legislative session before she leaves office at the end of 2018. While lawmakers will meet for 30 days next year to approve a budget, Martinez will not have another long session to try to advance her legislative agenda.

Democrats enjoyed a resurgence in last year’s election, winning back control of the House after two years of Republican control and expanding their majority in the Senate.

Even so, Democrats seem left to wait out the end of Martinez’s term before they can move many of their initiatives without the prospect of vetoes. What’s different now is that some Senate Republicans are willing to challenge the governor. For example, Sen. Craig Brandt, R-Rio Rancho, led the effort to override Martinez’s veto on teacher sick days. And most fellow Republicans in the Senate supported him, as the override carried in that chamber on a 34-7 vote.

“The Legislature can propose, and the executive can dispose,” he told reporters. “But you have to make the decisions that are right for the state of New Mexico, not a political party.”