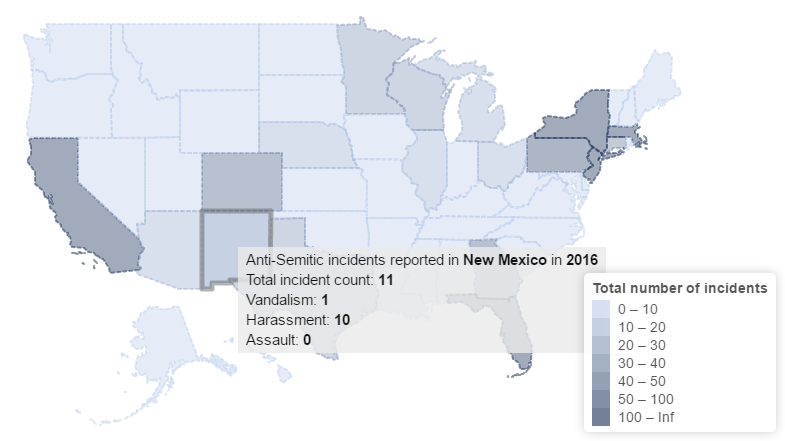 Screenshot of Anti-Defamation League map of anti-Semitic incidents in the United States.

Anti-Semitic incidents in New Mexico, as well as the rest of the country, increased dramatically during 2016 and the first quarter of 2017, according to an annual audit from the Anti-Defamation League.

The group’s Audit of Anti-Semitic Incidents reported seven incidents in 2015, 11 in 2016 and seven in 2017 through the end of March. Those this year included two widely publicized bomb threats at the Jewish Community Center of Greater Albuquerque. ADL also cited threats to a local website called ABQ Jew and an incident in an Albuquerque parking lot where a woman allegedly spit on a Jewish woman’s car and told her to “get ready for the next exodus” because of the election of Donald Trump.

Suki Halevi, the ADL New Mexico regional director, also cited an interview on KSFR public radio with Christopher Bollyn, a conspiracy theorist who has called 9/11 “a massive Zionist Jewish crime.” The interview, which ADL said was apparently favorable to his point of view, occurred last summer on “Camp Lovewave,” a program that KSFR has since discontinued.

In a statement, KSFR Program Director Merrylin LeBlanc said, “To say the least, we were disappointed by the one-sided interview of Christopher Bollyn and expressed our dissatisfaction with that particular show to the Lovewaves. We expect our producers to seek justification for any disparaging remarks, and found no such justification in that show.  Criticisms backed by facts are welcomed. We certainly do not support ‘hate’ speech.”

“One of the criteria used in allowing volunteers a voice on our airwaves is that they be responsible for what they broadcast and respectful of the community we serve,” LeBlanc said.

“ADL strongly supports the First Amendment and free speech,” Halevi said of the public radio station’s decision to interview Bollyn. “However, it’s important to speak out against anti-Semitism and the people who perpetuate it.”

She added that KSFR was “very receptive” to ADL’s concerns on the matter.

Halevi also said she was especially alarmed to hear about anti-Semitism going on in Albuquerque schools.

“Jewish students are being harassed by other students using Jewish jokes and anti-Semitic slurs,” she said.

School administrators in Albuquerque and across New Mexico “need to be aware this is happening and take steps against it,” she added.

All of these incidents are examples of viewpoints “usually considered extreme finding their way into the mainstream,” Halevi said. The current political climate, in order words, is emboldening people with extremist views to gain access to mainstream venues.

“There’s been a kind of normalization of hateful rhetoric and targeting people individually and in groups based on who they are,” she said, emphasizing that the hate is not only directed at Jewish people. “When there’s a sense that it’s OK to do this, then more people do it. If anything, it demonstrates the importance of speaking out against these incidents.”

That said, Haveli added she was encouraged by President Donald Trump’s statements earlier this week at an event commemorating the Holocaust.

At the event on Tuesday, Trump called Holocaust deniers “an accomplice to this horrible evil.” This came just two weeks after Trump’s press secretary Sean Spicer appeared to downplay Hitler’s crimes against Jews when comparing his use of chemical weapons to that of Syrian President Bashar al-Assad.

Correction: A previous version of this story mischaracterizd one of the reported incidents.