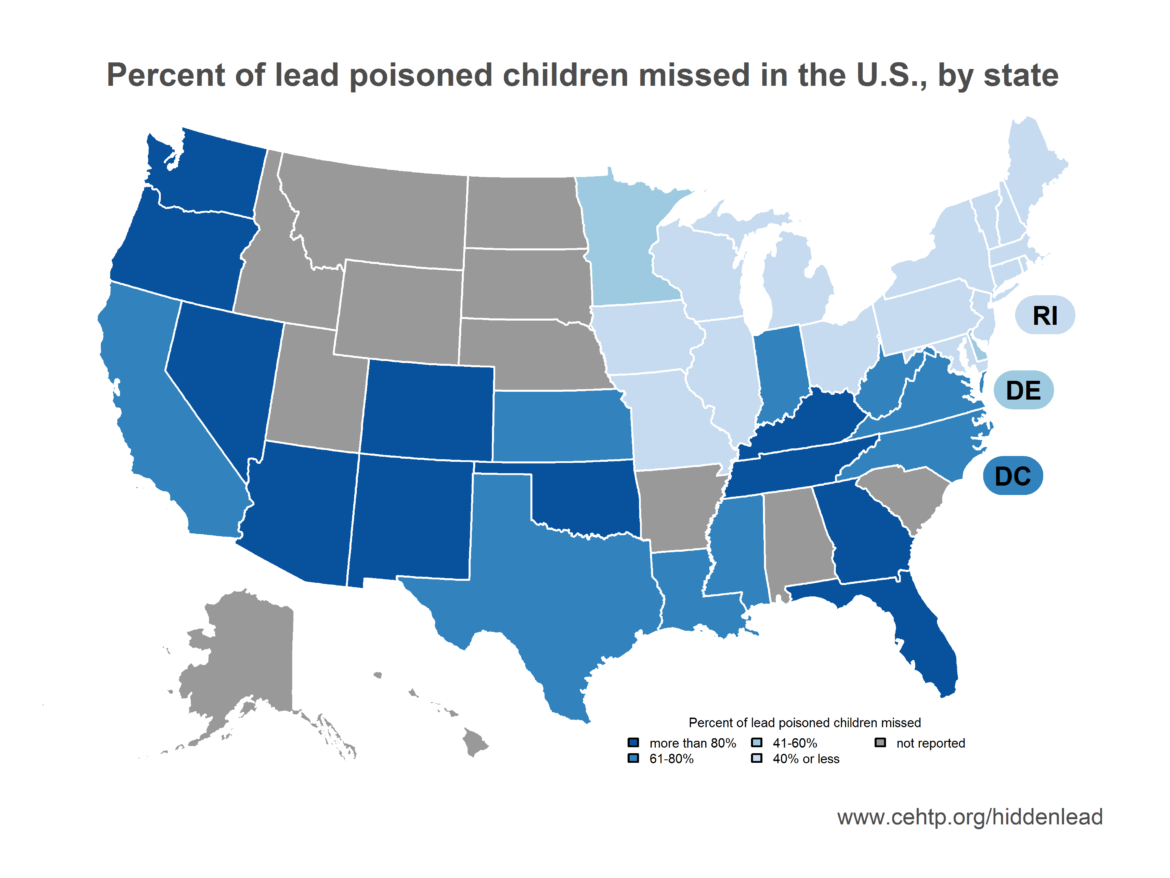 New Mexico is among the worst states when it comes to identifying all the children who have been poisoned by lead.

That’s according to a study published last week in Pediatrics, the peer-reviewed journal of the American Academy of Pediatrics.

Nationwide, only 64 percent of lead-poisoned children under the age of five are identified by testing. In New Mexico, that number is much lower—just five percent.

Lead paint and lead additive in gasoline were banned decades ago. But the ongoing Flint, Michigan emergency highlights that lead poisoning isn’t a problem relegated to the past. Today, 3.6 million homes with children in the United States have lead-based paint, and 6.1 million are estimated to have lead pipes.

In their newly released study, researchers from the Public Health Institute (PHI) looked at testing data from the years 1999 through 2010. Since that time, they estimate that testing rates have declined.

In fact, a closer look at New Mexico’s own numbers show that even though all Medicaid-eligible children ages between 12 and 24 months are supposed to be tested for lead levels, only 26 to 40 percent were actually tested in 2015.

New Mexico Human Services Department annual audits show those numbers vary according to which healthcare organization does the screening. In 2015, Molina screened only 40 percent of the state’s Medicaid-eligible children for lead. The numbers dip from there: Blue Cross and Blue Shield of New Mexico and Presbyterian each screened 33 percent and United Healthcare just 26 percent.

“Low screening percentages mean some children could be missing out on services they potentially need. Currently, the NMDOH Childhood Lead Poisoning Prevention Program is actively educating health providers, early childhood services and community-based programs about the screening guidelines, testing requirements, and ways lead exposure can be prevented,” he wrote in an email to NM Political Report. “As these reports show, as we are able to find more children with elevated blood lead levels, we can help the families eliminate sources of exposure and manage blood lead levels with case management.”

About 2.5 percent of American infants and children under six have elevated lead levels in their blood. In Flint, 5 percent of screened children had elevated levels. As NM Political Report wrote earlier this year, in more than 25 communities across New Mexico, those numbers were even higher.

In many places across New Mexico, fewer than 5 percent of kids had been tested for lead. And in some places, there was no testing data at all.

But even where testing occurs, many kids may be missed.

“[The higher numbers] might mean there’s a serious problem with lead exposure in those communities. But you don’t know how high it is,” said Eric Roberts, a research scientist with PHI, which is based in Oakland, California.

It’s also likely that doctors and clinics are missing kids in other communities.

“If you’re a clinician practicing in an area where it’s accepted there must be a lot of lead-poisoned kids out there, you’re encouraged to test a lot of kids.” In other words, when tests keep coming back positive, it reinforces the need to keep testing in that community.

“But I can see that going a different way,” he said. “If it’s a community where, for whatever reason, the consensus is there aren’t a lot of kids with lead exposure, clinicians won’t see much use in testing.”

That’s why, he said, PHI wanted to take an independent look at how many lead-exposed children there were in each state.

Since the 1960s, the National Center for Health Statistics at the Centers for Disease Control (CDC) has conducted an ongoing survey called the National Health and Nutrition Examination Survey. The study looks at a random sampling of Americans of all ages, studying each person intensively, using blood testing, physical examinations, nutritional analysis and more.

Looking at that survey’s results was an independent way for PHI to find out how common elevated lead levels are within the U.S. population. Using that data, they created a predictive model for the prevalence of lead poisoning among children.

“The idea is that knowing the socioeconomic, racial and housing characteristics of any given state, we can come up with our best estimate of how many lead-poisoned kids there should be,” Roberts said.

While he’s glad the CDC has tightened its threshold for lead exposure—halving it from 10 to 5 micrograms per deciliter—Roberts said there’s no safe level of lead in children’s blood.

“Even at the lowest levels that folks are able to measure, there are observed impacts on behavior and there are losses of IQ points,” he explained. Testing to that lower number also doesn’t capture kids who are exposed to a “non-zero amount.”

That’s a long-term public health problem, he said. And one that can have serious implications not just for one family, but for an entire community.

“It’s tough because while I want to emphasize that the danger can affect anybody, clearly there are social justice issues at work here,” he said. “When we generated that model to predict elevated blood levels, we knew exactly what variables to use: Race, housing and poverty.”

The American Academy of Pediatrics could revisit its testing recommendations, he said. Or, states could mandate tests for all children.

But, he said, “Medicaid has been required all this time. All those kids signed up were supposed to be tested, and it simply doesn’t happen.”

According to that article, last year, New Mexico implemented the CDC’s new reference level and lowered the threshold for initiating case management from 10 to 5 micrograms per deciliter. The state also shifted from testing all Medicaid-eligible children to a “targeted screening of children confirmed to be at highest risk, when sufficient data are available.”

According to the report, from 2010 to 2014, a total of 75,144 New Mexico children under 6 years of age had at least one blood sample screened for lead. During that time, 168 children under the age of 6 had elevated levels of lead in their blood.

According to the report, screening needs to improve in San Juan County, the southwestern and northeastern region counties and in Bernalillo County.

In an email, Rhien described the state’s ongoing prevention, treatment and response efforts.

Children are first screened through a finger-stick test. If the test shows the child has elevated lead levels, they’ll have a second, more accurate test. Rhien wrote that often upon retesting, “blood lead levels are found within normal ranges.”

In response to questions about what happens after tests have identified a child or a cluster of children, Rhien wrote that DOH’s role varies on a case-by-case basis.

Healthcare providers must report all instances of elevated lead levels to DOH. When the department’s Childhood Lead Poisoning Prevention Program is notified of a child with an elevated blood-lead level, Rhien wrote that they “assist providers in identifying the lead source as quickly as possible and then prevent the child from further exposure.” He added that the department works with the health care provider to counsel and educate the family on managing lead levels, and the child is re-tested until blood lead test results drop.

“In the less-common case when the lead level is greater than 20 ug/dL [micrograms per deciliter], when the healthcare provider and family are having a hard time managing lead levels, or when the provider is having difficulty finding the lead source, we can then go to the family’s home and assess lead hazards,” he wrote. “DOH does not provide any funding to remove lead hazards. The EPA has a ‘Renovate, Repair and Paint’ program for education and assistance with lead paint hazards in the home.”

Rhien urged all parents with children under the age of six to have them tested.

“That is why data alone does not always accurately represent what’s happening in individual communities in New Mexico,” he wrote.

In answer to questions about communities with higher numbers of children exposed to lead, he wrote: “We have not yet had a situation where multiple children in the same neighborhood had elevated blood lead levels that could be explained by one common lead exposure.”

Correction: In the original version of this story, we wrote that NMPR had been seeking interviews with DOH since December. That was when the lead testing data was first released by Reuters; we reached out to DOH in January.