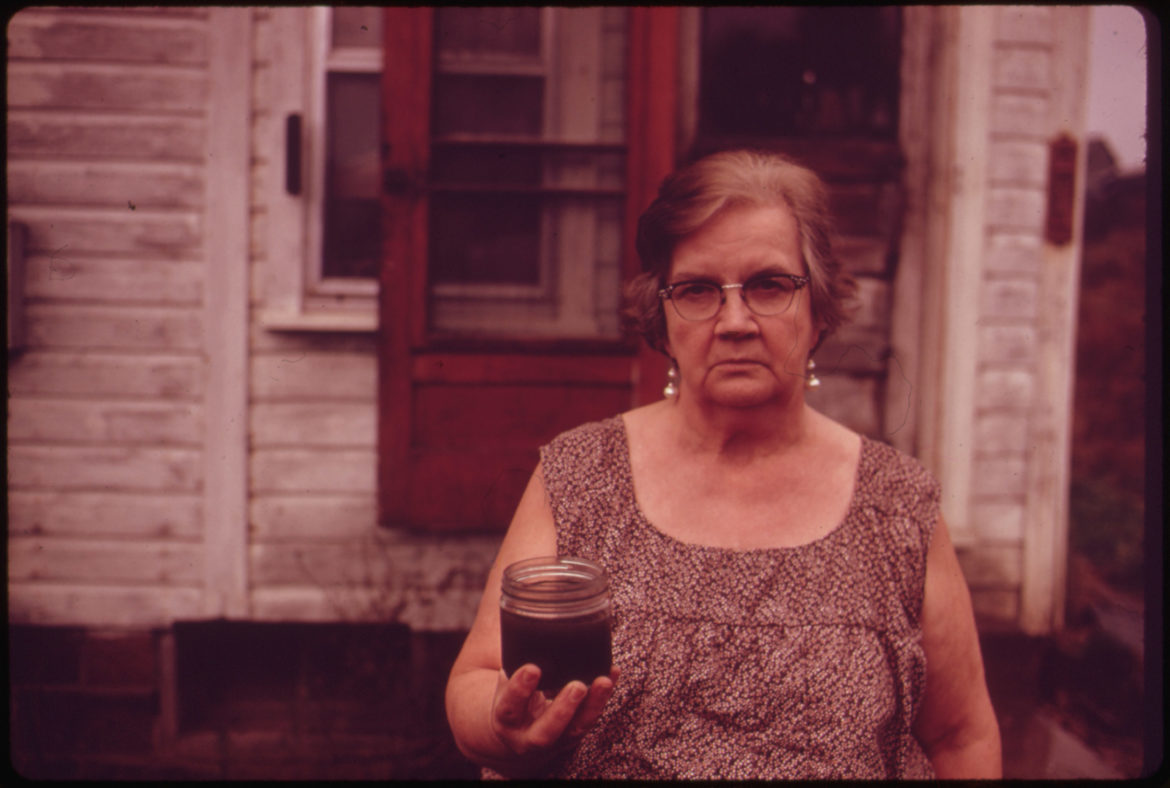 Mary Workman Holds A Jar of Undrinkable Water That Comes from Her Well, and Has Filed A Damage Suit Against the Hanna Coal Company. She Has to Transport Water from A Well Many Miles Away. Although the Coal Company Owns All the Land Around Her, and Many Roads Are Closed, She Refuses to Sell. 10/1973

If you saw this week’s wrap up of New Mexico’s most important environment news (which you definitely should read) you’ll have noticed a picture of the Four Corners Power Plant from the 1970s.

The Four Corners Power Plant, photographed by Terry Eiler in 1972 as part of the EPA’s Documerica project.

That photo and thousands more are from the Documerica Project.

In the 1970s, the brand-new U.S. Environmental Protection Agency hired freelance photographers to document pollution, everyday life and the agency’s activities. The U.S. National Archives digitized more than 15,000 photographs from the series and included them in their online catalog.

Many of the images show how air pollution was affecting cities and illustrate the unhealthy environmental conditions that low-income and communities of color live with on a daily basis. There are photos of coal miners and a discouragingly-contaminated Baltimore Harbor in 1973 and from Louisville in 1972, when thousands of people had to be evacuated after a barge carrying liquid chlorine threatened to spill.

Other photographers documented the nation’s public lands and still-wild places.

Photographer Boyd Norton, for example, participated in the project from 1972 to 1975, traveling to western national monuments and parks and photographing wildlife, archaeological ruins and even New Mexico’s burgeoning solar industry. See all of Norton’s Documerica photos here.

During the summer of 1972, Terry Eiler took pictures on the Navajo Nation and Hopi reservation. He snapped that photo of Four Corners Power Plant, and others, too. The archives also include more than a hundred photos he took of peoples’ everyday lives. Those are all here.

Some of New Mexico’s unconventional homes, near Taos and Corrales, are documented. And it’s also likely that scrolling through the images, you’ll find some your favorite hiking spots and whitewater rapids, and maybe even some familiar faces.

Thousands of images from the project, which ran from 1971 to 1977, can be found online here.

Village of Supai – Part of the Grand Canyon National Park

Open Burning Is Still Used at the Moab City Dump, and Despite Haze and Smoke Visible in the Town Below, the Local Government Still Has No Plan to End the Practice. The Dump Also Mars a Fine Natural Setting, Dominated by the LaSal Mountains, 05/1972

Log home under construction in Santa Fe, New Mexico, where solar heating panels will be installed in the roof. Logs, which require minimal energy for fabrication, and solar heating, plus an electrical wind generator on the roof will result in minimal energy consumption, 04/1974