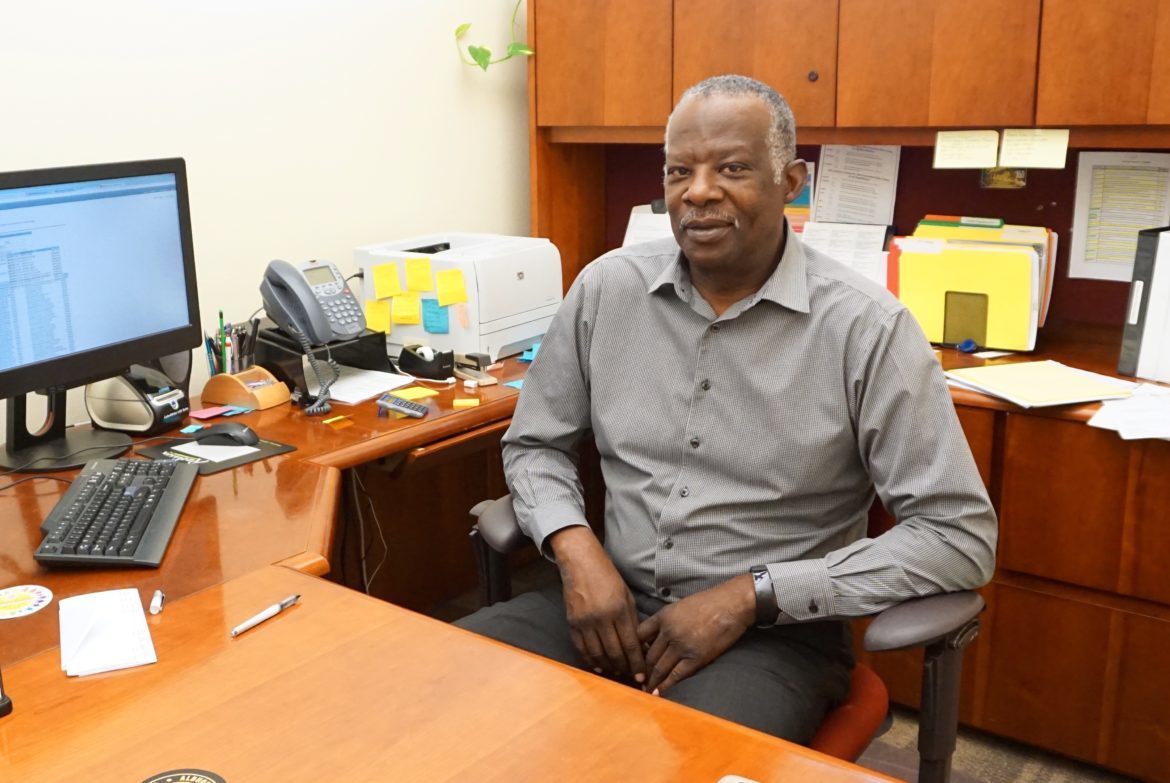 Leonard Waites, a member of the Albuquerque Police Oversight Board and executive director of the state Martin Luther King, Jr. Commission, plans to ask questions about the ATF operation at the next oversight board.

Black community leaders and citizens want to know who invited out-of-town federal agents and informants into Albuquerque and how the decision was made to focus an undercover sting operation on an impoverished, largely minority section of the city, netting a highly disproportionate number of black defendants.

They plan to put those and other questions into a letter to the federal bureau of Alcohol Tobacco Firearms and Explosives (ATF) and the U.S. Attorney’s Office.

“We want to know exactly what happened and why,” said Patrick Barrett, a member of the two organizations drafting the letter — the local chapter of the National Association for the Advancement of Colored People (NAACP) and the Sankofa Men’s Leadership Exchange, a grassroots organization of black men.

Barrett and others interviewed for this story were reacting to a NMID investigation of the sting published last month. NMID found 28 of the 103 people arrested — or 27 percent — were black in Albuquerque, whose black population is 3 percent. Blacks composed just 5 percent of drug and gun defendants in federal court in New Mexico from 2006 through 2015. Hispanics also were overrepresented among those arrested, while whites were heavily underrepresented compared to Albuquerque’s population.

Additionally, ATF appears to have arrested few if any of the high-level gun and drug runners the bureau says it sought, NMID found. Many swept up were homeless, living in cars and drug addicted. Many lacked the lengthy violent criminal histories agents say they used as a prerequisite for targeting.

In a follow-up story, NMID reported that ATF imported five confidential informants — three of whom were black and two Hispanic — from out of town to help agents choose targets for the operation. The informants, at least some of whom have previous criminal histories themselves, were paid $1,400 a week or more plus bonuses and expenses.

Federal officials called the operation an “unprecedented success” that took down “the worst of the worst” in the city.

But black residents interviewed by NMID called the findings “appalling” and “disturbing.” And they vowed to seek reforms, including questioning mayoral candidates about the ATF operation at a forum in advance of the October election.

“After reading your article, a lot of people are alarmed by what this looks like,” Barrett said. “I don’t think it was fair at all, and I think it was racially motivated.”

Black citizens, leaders and the executive director of the American Civil Liberties Union of New Mexico said the operation echoed racial targeting by law enforcement stretching back to the 1960s and raised concerns about constitutional and civil rights violations. They also worried the ATF sting did little to blunt crime in Albuquerque, but instead damaged a tenuous trust in law enforcement among minority communities that had shown signs of improvement.

Numerous questions remain about the operation.

Russell Johnson, one of the ATF’s lead agents on the operation, testified in court in April that “individuals with political power” summoned the federal agency to combat Albuquerque’s soaring violent crime rates. He did not name them, but said local agencies assisted in the operation.

“We need to know, who are these individuals who have political power?” Harold Bailey, president of the Albuquerque NAACP chapter, said. “We could just eliminate a lot of these concerns about civil rights violations if you bring the proper individuals, African Americans who have standing, to the table at the beginning.”

No one approached the NAACP — or any other black community groups — in advance of the operation, according to Bailey and Barrett, who is the chapter’s second vice president.

“We live here, we know what’s going on,” Barrett said. “We have the solutions to a lot of our problems. But again, we’re silenced, and this is the fallout from it.”

The ATF has repeatedly ignored NMID’s requests for comment about the operation.

A spokesman confirmed that New Mexico State Police officers “assisted” in the operation but would not elaborate. And a spokesman for Gov. Susana Martinez said she was “not aware of or involved in” the planning of the sting.

In an email last week, APD spokeswoman Celina Espinoza declined to answer detailed questions about the department’s involvement in the operation. “After speaking with the agency in charge of the investigation, they asked that all media inquiries in this matter be referred to them,” she wrote.

A spokeswoman for Mayor Richard Berry ignored NMID’s requests for an interview, and she did not respond to questions including whether Berry was among those who invited ATF to Albuquerque.

Berry and APD will face those questions again.

“I have a good working relationship with Mayor Berry, but let’s just say I have some questions here,” he said. “It’s not that we’re against law enforcement initiatives, but sometimes the right intentions can lead to the wrong results, especially for black men in America.”Bailey said he plans to request a meeting with the mayor.

Leonard Waites, a member of the Albuquerque Police Oversight Board and executive director of the state Martin Luther King, Jr. Commission, is troubled by the operation, too. He plans to ask APD officials at an upcoming oversight board meeting about the extent of their agency’s involvement.

Johnson, the ATF agent,  said under oath in April that the Albuquerque Police Department and other agencies suggested ATF target a swath of southeast Albuquerque known as the International District or, more disparagingly, the “War Zone.” APD officers were “assigned” to Johnson’s team throughout the operation.

The local agencies did not provide ATF with data to show that area of town had higher crime rates than others, however.

“I want to know more. You’re affecting a minority population, and that’s not good to me,” Waites said. “I will be asking these questions through the board. After reading your article, I am really concerned about this. I’m a data guy, and if you look at the data — 28 African Americans when Albuquerque is 3 percent? Come on. We have a real problem here.”

Waites, an Albuquerque native, said black people have been racially profiled in the city for decades, and learning about the ATF sting deepened old wounds.

He recalled a “lockdown” in the Kirtland addition, one of the city’s only predominantly black neighborhoods, after the murder of APD officer Phil Chacon in 1980.

“Anyone who was African American who was driving around town at that time was being stopped, pulled over,” he said.

And just last month, Waites said, he was driving his 2005 Lexus when an APD officer pulled up next to him at a stoplight.

“I just knew by the expression on his face that he was going to pull me over. And he did,” Waites said. The officer said the registration sticker on his license plate was obscured, a claim Waites denied.

“He stopped me because of profiling,” Waites said. “I understand it, I know what that is. And during the stop, I just made sure I did the right things to not make it worse.”
In the 2016 Albuquerque sting, ATF agents sent black confidential informants into black-owned barbershops, a soul food restaurant and into a park in a black neighborhood to look for targets, NMID found.Janette McClelland, a 55-year-old transplant from South Central Los Angeles who moved to Albuquerque in 2004, said some of the ATF’s tactics reminded her of methods federal law enforcement have used throughout American history, including the FBI’s infamous Counter Intelligence Program of the 1950s and 1960s. Known as COINTELPRO, that ongoing operation included surveillance and using black informants to infiltrate black civil rights and black power groups.

“It’s appalling. It’s disheartening,” McClelland said. “You want people to build trust in your law enforcement, your public officials. But after this happens, how the hell can we trust them? This is how cities explode. Back home, the city would have exploded. And this city is going to explode.”

She also lamented what she called the slow response to news of the sting operation from local black leaders.

McClelland, who spent several months homeless after losing a job in 2012, now lives in a weekly-pay motel off Gibson Boulevard near Kirtland Air Force Base. The motel sits in the area of town ATF targeted, and McClelland said things do not feel any safer since agents pulled up their stakes last summer after the four-month operation.

That’s no surprise, said Peter Simonson, executive director of the ACLU-NM. Studies have shown that targeted law enforcement operations such as the ATF sting have not accomplished their declared goals.

The NMID investigation “reads like an artifact of the failed war on drugs that has done little to reduce crime or recidivism and has contributed to widespread misery in the lives of so many poor families,” Simonson said. “On so many levels, it runs afoul of basic values in our Constitution. I’m thinking particularly about the 14th Amendment and equal protection under the law.”

People in Albuquerque’s minority neighborhoods already distrust law enforcement, he said, after decades of negative experiences with APD. As details of the ATF sting spread in those communities, residents could grow unwilling to cooperate with law enforcement in the fight against crime.

“How ironic that, in a minority-majority state, you can nonetheless identify a trend of racial profiling — even against that backdrop,” Simonson said. “That is pretty alarming. It really stands as a great and terrible example of why we need a deep and far-ranging conversation about the logic of our criminal justice system and how it should be reformed.”

Barrett, of Sankofa and the NAACP, said black groups had built some trust between their communities and local officials and law enforcement in recent years. He pointed to suggestions APD adopted from the organizations’ members to improve the Police Academy and athe collaboration with the Berry administration to remove a Confederate flag in Old Town.

There have been “tangible wins” for black organizations through a series of meetings with city leaders, Barrett said.

“But when this story comes out, it was like a punch in the face,” he said. “The trust that the community’s been trying to build is corroded again.”

Barrett and Bailey said they plan to notify the national NAACP about the sting operation as they seek answers from federal officials. And Sankofa, the grassroots organization in Albuquerque, wants to hear from candidates running to succeed Berry as mayor at a forum planned for August, Barrett said.

“We definitely want to them to address this,” Barrett said. “We want to take steps to make sure this type of stuff doesn’t happen again.”

McClelland said she hopes exposure of the ATF’s tactics and the results of the agency’s operation will spark a public debate.

“I hope this is a wakeup call for the black community,” she said. “I hope they call out the officials, call out the ministers, call out the organizations: speak to us, help us. Our leaders should go to officials and law enforcement and tell them to stop marginalizing us, stop penalizing us for being black. Listen to us. Provide a dialogue, some alternatives. Help us get off the streets. Help us with our housing. Tell them they’ve got to do better, they’ve got to be accountable.”