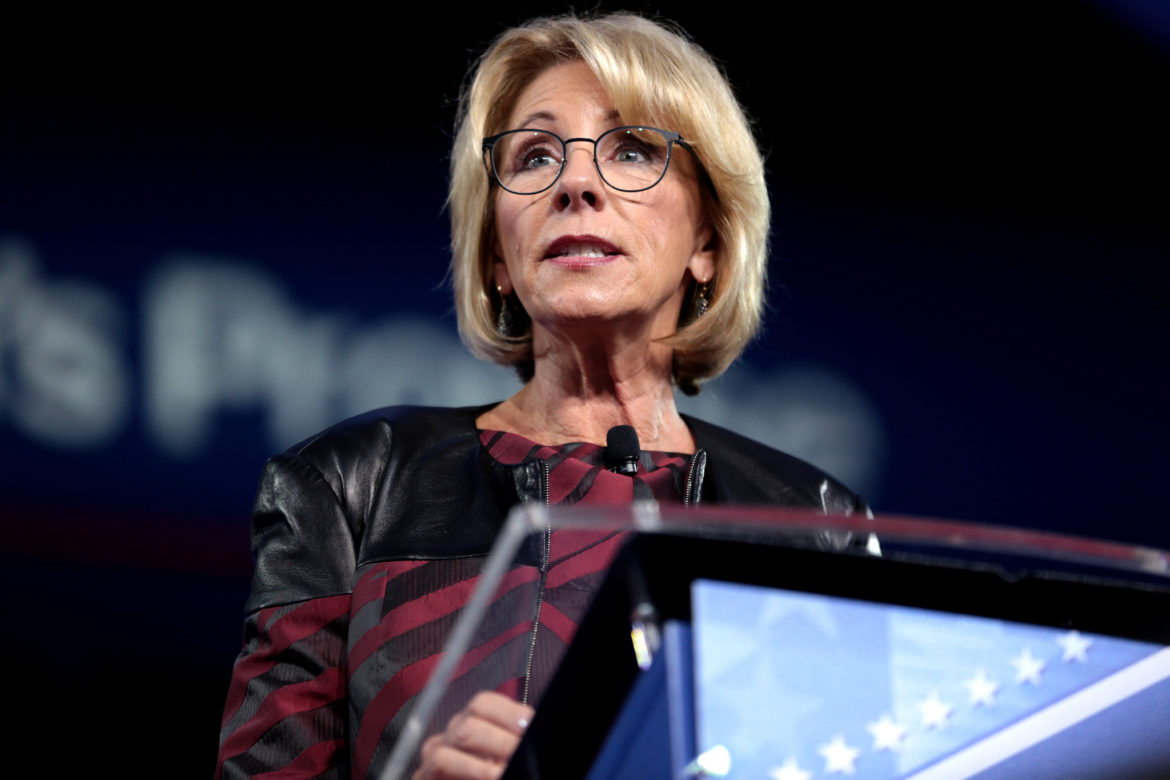 Senators Martin Heinrich and Tom Udall, both Democrats, signed onto a letter to the secretary telling her “your actions belie your assurances” on these issues. The letter cited her ties to a prominent anti-LGBTQ group and her appointment of staff who oppose a 2011 Title IX Guidance on sexual assault.[perfectpullquote align=”right” cite=”” link=”” color=”” class=”” size=””]No ads. Just news. Support local, non-profit news.

[/perfectpullquote]The two highlighted her ties to the Family Research Council, a Washington D.C. organization that the Southern Poverty Law Center calls an anti-LGBT extremist group, and contrasts her relationship with the group with testimony she gave in front of a Senate committee.

“In testimony before the Senate Health, Education, Labor, and Pensions Committee, you attempted to distance yourself from your family’s giving to organizations such as the Family Research Council, which promote intolerant views of lesbian, gay, bisexual, transgender, and gender non-conforming Americans and others,” the senators wrote. “Yet, on June 15, 2017, the Family Research Council participated in an official event on engaging fathers in students’ education at the Department.”

The Department of Education has laid out plans to loosen requirements on investigations into civil rights complaints, according to an internal memo sent to staff on June 8 and obtained by ProPublica.

Under the Obama administration, the department’s office for civil rights applied an expansive approach to investigations. Individual complaints related to complex issues such as school discipline, sexual violence and harassment, equal access to educational resources, or racism at a single school might have prompted broader probes to determine whether the allegations were part of a pattern of discrimination or harassment.

The DOE has said the changes will streamline investigations and provide results more quickly. Udall and Heinrich agree this is important, but say the Trump administration’s proposal to slash funds in the OCR conflicts with that rationale.

“Unfortunately, the Administration’s budget request proposes to reduce OCR funding, which will lead to a loss of staff and, as a result, an increase in the backlog of cases,” the letter to DeVos reads. “Closing cases quickly at the expense of the quality of the investigation is not in the long-term interests of the complainants and impedes students, teachers, and families in receiving just resolutions.”

The Democratic senators also questioned civil rights investigations into complaints by transgender students and cited another memo by Jackson.

“The memo suggests the Department will allow investigators to determine whether and how they will protect transgender students, including their right to use the facilities corresponding with their gender identities,” the letter states. “It is the responsibility of the federal government and the Department to investigate and address civil rights violations at schools and on campuses across the country.”

The senators asked for responses from DOE on a number of issues by July 11:

A list of all metrics that will be used by the Department to assess effectiveness of civil rights enforcement.

Update: This post was updated to clarify the letter was from a number of Senators, not just Udall and Heinrich.