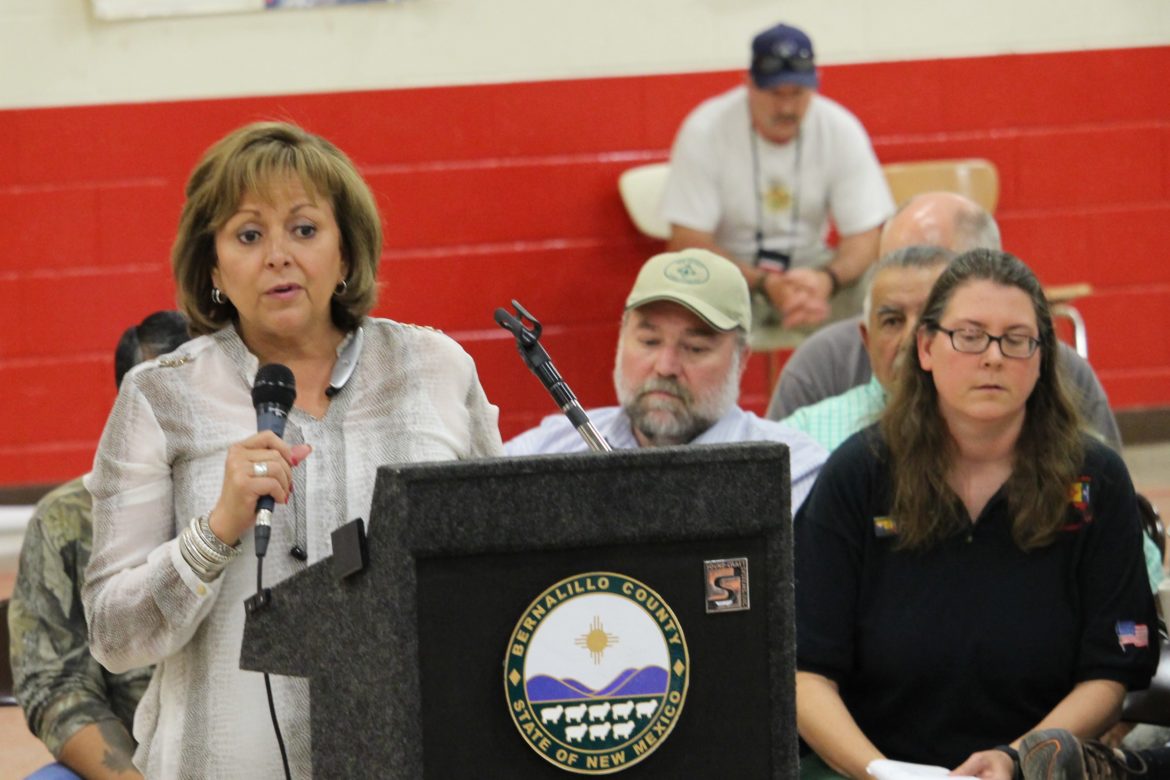 Last June, Gov. Susana Martinez joined incident commanders and U.S. Forest Service officials to update local residents on yet another forest fire. She had already declared a state of emergency and called in the state National Guard for the Dog Head Fire in the Manzano Mountains near Albuquerque.

Since taking office five years earlier, Martinez had presided over similar meetings across New Mexico while various fires and millions of acres of forest burned. With global warming, the number and size of fires has increased and fire season has lengthened by about two months in the western United States. Even a 2005 report prepared by the state warned that New Mexico’s forests were vulnerable to “catastrophic” wildfires and massive diebacks.

But when asked at that Dog Head Fire meeting about her plans for long-term forest management, Martinez complained about the federal government.

“There are very large amounts of land that belong to the U.S. Forest Service, we can’t as a state control it,” she said. “They’re not maintaining them. They maintain them for this critter or that, the spotted owl, or the sand dune lizard, whatever it may be that they’re listing as an endangered species, and so you don’t treat the forest and clean it out and thin it out. There is an enormity of fuel.”

The state has “argued” and “fought” with the Forest Service, she said.

“So, it’s like, you know what? Give it back to us and let us take care of it,” she said. “Then we will be able to take care of it much better because it affects us.”

For years, Martinez’s office has dodged and ignored questions about her position on climate change and the administration’s plans to prepare the state for warming’s impacts to water supplies, agricultural yields, forests and public health.

The governor, whose election and re-election campaigns were heavily financed by companies and individuals in the oil and gas industry, doesn’t publicly deny climate change or call it a “hoax” like some other Republicans, including President Donald Trump. Nevertheless, she has effectively thwarted the state’s ability to address the impacts of climate change and take advantage of economic opportunities in renewable energy.

As the Trump administration aggressively rolls back programs focused on climate change and renewable energy, some Democratic governors are taking things into their own hands. Many are fighting to preserve federal environmental regulations and building or strengthening programs of their own.

This isn’t the first time states have tried to pick up the federal government’s slack on climate change. When President George W. Bush was elected, the science was solidifying and the call for worldwide action had become increasingly urgent. Meanwhile, Bush halted climate-related efforts at federal agencies.

The New Mexico Legislature passed its own statewide Renewable Energy Portfolio in 2004. Still in place today, that law requires utilities to procure 20 percent of their electricity from renewable sources by 2020.

Then-Gov. Bill Richardson, a Democrat who served from 2003 to 2011, signed that bill into law. He also issued executive orders calling for climate studies and to cut greenhouse gas emissions. In 2007, he and four other western governors including California Gov. Arnold Schwarzenegger, a Republican, sought to develop a market-based program that would reduce greenhouse gas emissions.

Early in Richardson’s administration, the state released its study about the potential impacts of warming, including increased public health problems, water scarcity, wildfires and infrastructure damage from severe storms as well as a decline in tourism. The 47-page report provided a roadmap for state leaders to confront the challenges warming posed to New Mexicans.

During that time, state legislators also started taking the issues seriously. In 2007 alone, they introduced 24 bills and memorials related to climate change. In comparison only 22 bills even mention the phrase between 2011 and 2017.

Even then-state Rep. Andy Nuñez, a Democrat-turned-independent-turned-Republican farmer representing Hatch, introduced memorials calling for action in the Richardson era. The southern New Mexican, then an independent, was worried about flooding and rising flood insurance costs. Both of his memorials that year highlighted the urgency of addressing climate change, the scientific consensus around warming and the irreversibility of many associated impacts of warming.

The short-lived push ended when Martinez took office in 2011.

Martinez immediately overturned Richardson’s “pit rule” designed to protect groundwater from pollution from oil and gas drilling, withdrew the state from the Western Climate Initiative, ended efforts by the state’s Environmental Improvement Board to cut carbon emissions, revamped and weakened the New Mexico Environment Department (NMED), directed the elimination of climate-related programs and issued an executive order creating a task force to “identify all red tape regulations that are harmful to business growth and job creation.”

Her initial choice to lead the state’s Energy, Minerals and Natural Resources Department was former U.S. Sen. Harrison Schmitt, a climate change denier who eventually withdrew his name from consideration to avoid a background check.

Even after scientists announced that North America’s largest methane anomaly was in the atmosphere above northwestern New Mexico, Martinez continued to call for more drilling in the area and criticized the federal government for not issuing drilling permits fast enough.

Last year, she nominated an oil and gas executive, WPX Energy’s recently-retired San Juan regional vice president Ken McQueen, to head the Energy, Mineral and Natural Resources Department. And one of Martinez’s NMED secretaries, Ryan Flynn, has since left the agency to direct the New Mexico Oil and Gas Association.

Those changes sent a signal to legislators.

“When I was introducing bills in 2005, 2006 and 2007, it was to try and educate people, but the reason I don’t introduce those bills now, is they will not be signed,” state Sen. Mimi Stewart, D-Albuquerque, told NM Political Report. “The governor has made it clear: she has vetoed my solar tax credits, my other bills like that, and it just doesn’t make sense to many of us to work as hard as we can to get bills passed only to have them vetoed.”

In this year’s session Martinez vetoed 153 of the 277 bills legislators passed, including one sponsored by Sen. Jeff Steinborn, D-Las Cruces, directing the state to consider using renewable energy at its buildings—but only when doing so would save the state money.

“It’s become very clear that the governor is not interested in the topic of climate change, or interested in diversifying our economy,” Stewart said. “All hope is not lost, but with this governor, we have gone backwards in our promotion of solutions to climate change.”

Once a new governor is in office, bills incentivising home solar systems, boosting renewable energy and addressing climate change will be “front and center,” Stewart said.

“The public is way ahead of the politicians on this issue, and they are rightly afraid, and think that we are not doing enough,” she said. “And we are not.”

“We’ve gone backwards,” he told NM Political Report. “It’s not just that we could be a leader: we lost the leadership we had in the West.”

In Colorado, for example, the renewable energy industry grew 30 percent between 2009 and 2014 and currently employs 62,000 people. Even imposing limits on oil and gas industry methane emissions—a state regulation that served as a model for a national rule cutting pollution and waste from energy development—development continues in the state. BP is planning to anchor its western headquarters in Denver, whereas the oil giant is closing its Farmington office and reducing its New Mexico workforce.

“The state needs to diversify its economy—I tried to diversify with the movie industry and renewable energy, and a number of other new tech ventures, but now, we’re just at the bottom of every list,” Richardson said. “With renewable energy, climate change, the [Western Climate Initiative] we were the leaders for eight years.”

Richardson recalled the grip the oil and gas industry had on New Mexico even then: “I had to do quite a lot through executive orders because the oil and gas lobby was very strong, and they were anti-renewable,” he said. “They tried to thwart my efforts on the pit rule.”

He also had advice for New Mexico’s next governor, who will be elected next year and take office on Jan. 1, 2019.

“Restore all the executive orders I put in, honor the Paris Agreement and the Western Governor’s agreement on renewable energy and renew the pit rule. First, restore, and then be innovative and create new initiatives that affect renewable energy,” he said. “We’ve fallen behind. Behind Colorado and Arizona. Even Texas.”