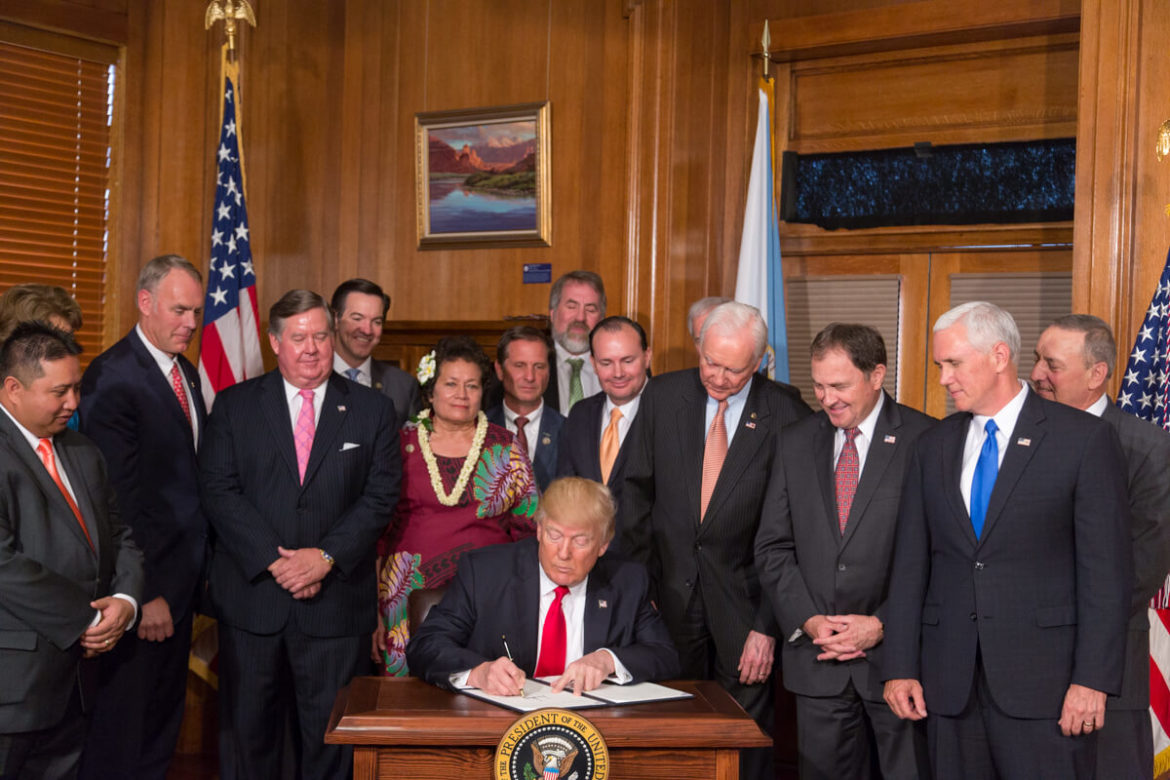 No president has ever abolished a national monument, and it has been more than 50 years since a president shrank one. Nor has Congress revoked any significant monuments. The high regard given these special places is part of what makes President Donald Trump’s order to review all large monuments designated since 1996 so extraordinary. Courts have never decided whether a president has the legal authority to change or undo a designated monument, and now this uncertainty has sparked a clash of legal titans.

A multitude of legal experts — including 121 law professors — argue that presidents lack the power to alter or revoke monuments. Meanwhile, a much smaller but no less adamant group asserts the opposite. These opponents are waging a tug of war in opinion pieces, blog posts, law journals, comment letters and at scholarly conferences. Both sides cite the 1906 Antiquities Act and decades of legal opinions and obscure congressional documents.

This arcane debate over presidential authority matters because the ultimate fate of any monuments Trump targets likely will lie with the courts. Building the legal case to abolish or reduce a monument would be a herculean task, says presidential historian Douglas Brinkley, but if a judge allows Trump to shrink even one, precedent would be set. “When you save national monuments, there’s a sanctity to it,” says Brinkley, a professor at Rice University. “If you’re allowed to start mauling and molesting the monuments, then every other national monument is in jeopardy.”

The Trump administration’s review focuses on 27 monuments, some land and others marine, designated by Barack Obama, George W. Bush and Bill Clinton. All but one of the land-based monuments are in the West and larger than 100,000 acres. In July, Interior Secretary Ryan Zinke ended reviews of Colorado’s Canyon of the Ancients, Idaho’s Craters of the Moon and Washington’s Hanford Reach, recommending no changes. But Zinke has proposed significant reductions to Utah’s Bears Ears, and further recommendations are due by Aug. 24.

One of the most significant voices arguing on behalf of Trump’s authority is John Yoo, who rose to prominence after 9/11, when, as a deputy assistant attorney general, he wrote memos used to justify torturing suspected terrorists. Yoo, a University of California, Berkeley law professor, is a frequent TV commentator on presidential authority, and doesn’t always support Trump. On the monuments issue, he is partnering with Todd Gaziano, another former Justice Department lawyer and the executive director of the Washington center of the Pacific Legal Foundation, which often argues for property rights and against environmental protections.

The 121 professors were organized by Justin Pidot, a professor of natural resource law at the University of Denver. As an Interior deputy solicitor under Obama, Pidot worked on the designations of several monuments, including Bears Ears, and is passionate about the topic. He posted a six-page letter on Listservs and asked other law professors to sign on before he submitted it as a comment to Interior’s review. He was surprised when 120 other professors joined. “We’re in uncharted territory here. No president has ever done anything like this before: It’s calling into question fundamental principles of public-lands law,” Pidot told High Country News.

Their argument goes as follows: Under the Constitution, Congress has authority over public lands unless it explicitly delegates that power. The Antiquities Act gave the president authority “only to identify and reserve a monument, not to diminish or abolish one. Congress retained that power for itself,” the scholars write. They cite a 1938 opinion by Franklin Roosevelt’s attorney general, Homer Cummings, that concluded that the Antiquities Act “does not authorize (the president) to abolish (national monuments) after they have been established.”

This includes altering monuments, they argue, according to Congress in the 1976 Federal Land Policy and Management Act, which dictates that the Interior secretary may not “modify or revoke any withdrawal creating national monuments.” The professors add that the legislative history (a report from a House committee) makes it clear that Congress meant presidents, too. The bill would “specifically reserve to Congress the authority to modify and revoke withdrawals for national monuments created under the Antiquities Act,” the House committee report reads.

Four prominent environmental law professors expand upon the FLPMA argument in a May Virginia Law Review article. One of them, University of Colorado law professor Mark Squillace, concedes it hasn’t been tested in court, and a judge would have to accept that the committee report clarifies Congress’ intentions. “If the court is willing to accept the legislative history, then I think it’s game over,” Squillace says.

But their opponents, in an LA Times opinion piece, contend that FLPMA “is a separate statute, on a different subject, that did not alter the text or plain meaning of the Antiquities Act.” If that’s the best argument their opponents have, they say, “they should lose.”

Gaziano also scoffs at the scholars’ reliance on an “ambiguous” report from a congressional committee. The late Supreme Court Justice Antonin Scalia “famously would never look at a committee report,” Gaziano says. The reason he and Yoo are far outnumbered, he says, is that academics tend to be liberals who in this instance are swayed by politics, not law. When the Supreme Court weighs in, Gaziano says: “This isn’t going to be close. It’s going to be very embarrassing for them.”

An even stronger case, they argue, can be made that presidents have the right to revoke any monument that was illegally designated, such as one that is overly large. The Antiquities Act specifies that presidents should preserve “the smallest area compatible with the proper care and management of the objects to be protected.”

Such reductions are permissible, they say, because presidents have done so repeatedly in the past. In 1915, President Wilson reduced Mount Olympus National Monument (now Olympic National Park) almost by half. Franklin Roosevelt shrank the Grand Canyon Monument (now a national park) under pressure from ranchers. Yoo and Gaziano offer advice for how Trump should proceed: “We think the courts are more likely to uphold significant reductions if the president could credibly include in his determination that the original designation was inappropriately large relative to the object to be protected or has become so with changed circumstances,” they write in a report for the conservative think tank American Enterprise Institute.

Which of these arguments, if any, will prove most persuasive to the courts is uncertain, especially given that Congress has been silent on the issue. It has twice amended the Antiquities Act — to ban presidents from designating future monuments in Wyoming or monuments larger than 5,000 acres in Alaska — without specifying whether their size could be limited elsewhere or if a president can change or revoke one. What is clear is that Trump has taken the nation into uncharted territory when it comes to the future of the vast stretches of Western lands and waters preserved by his predecessors. Jim Rasband, a law professor and vice president of Brigham Young University, concludes in a paper he delivered at a July legal conference: “A new chapter in the meaning of the (Antiquities) Act may be about to be written. Depending on how the courts choose to read congressional silence, which is always a tricky proposition, national monuments may prove to be less permanent than once envisioned.”