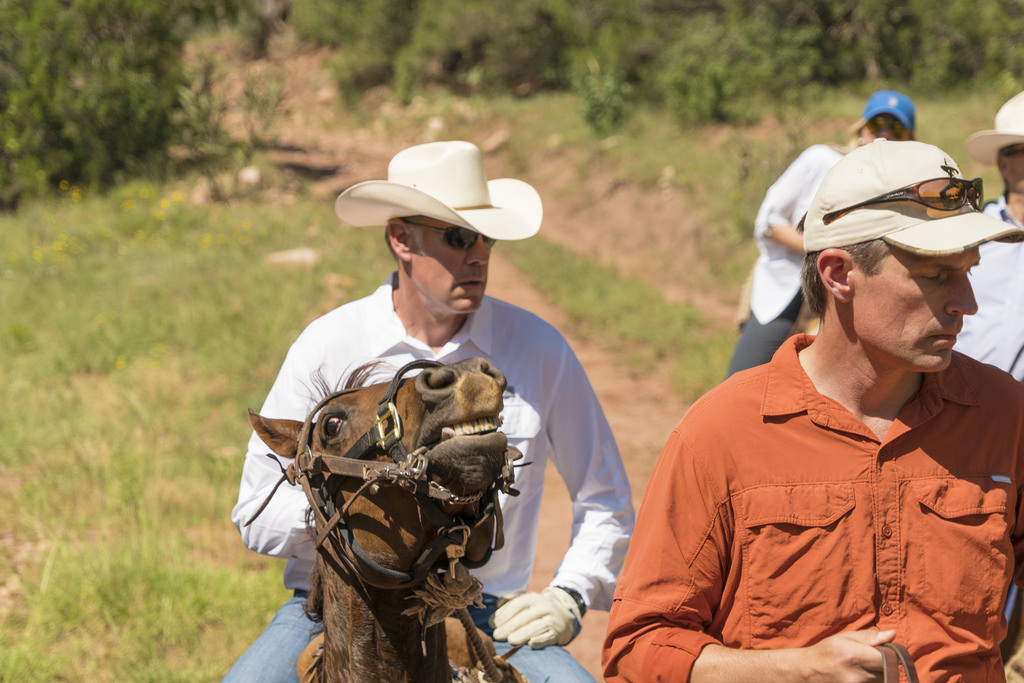 U.S. Department of the Interior Secretary Ryan Zinke had 120 days to review 27 national monuments and recommend to the White House whether they should be left alone, eliminated or reduced in size.

Thursday, Zinke submitted his review to the White House. But the Interior Department has yet to make his specific recommendations public.

During the four month review, Zinke visited eight national monuments in six states, including New Mexico. His office said the review included more than 60 meetings, “tours of monuments conducted over air, foot, car and horseback” and a “thorough review” of more than 2.4 million public comments that had been submitted to the department. NM Political Report has asked how much the review process cost and will update this story once we hear back from the department.

In the one-and-a-half page summary released Thursday, the department acknowledged that the comments it received were “overwhelmingly in favor of maintaining existing monuments” yet qualified that by saying that the comments “demonstrated a well-orchestrated national campaign organized by multiple organizations.”

At an event in Albuquerque on Thursday, Michael Casaus, The Wilderness Society’s New Mexico State Director, called it a “sham of a review process.”

Casaus said it was an “assault” on public lands and an “insult” to the local communities that worked on the monument designations in New Mexico, tribal members trying to protect cultural and sacred artifacts from being looted, veterans and small business owners. “It is also an insult to my Hispanic community,” he said, which worked to ensure that the lands would remain open for traditional uses like grazing, hunting and wood-gathering.

“At a time when our country is so divided,” Casaus said the two designations in New Mexico demonstrated how people “worked together by focusing on our shared values.”

‘I will fight him tooth and nail’

“It’s fair and obvious [the White House] needs time to read the report, talk internally, and then to release it publicly,” he said during a press call Thursday morning. Bishop chairs the House Natural Resources Committee, and is an outspoken critic of national monuments, particularly those designated by presidents Bill Clinton and Barack Obama, both within his state and elsewhere in the country. “It’s fair also to give the players a chance to review it before they have to make public statements,” he said.

Related story: What does Utah have to do with NM’s national monuments?

Bishop said that by designating large monuments, some presidents had violated Congress’s original intent when it passed the Antiquities Act in 1906. The current review, he said, was about “the rule of law” and preventing the executive branch from “making up the rules as it goes along.”

Bishop accused presidents of superseding their authority by designating “millions of acres” and “making up” land management rules, and said now “we have to bring some rationality into the process so local governments and local people feel they have their voices heard.”

He denied that that move to shrink some monuments was aimed at appeasing extractive industries, like oil and gas. He also shot back against conservation organizations that will likely sue over any changes to the monuments that were designated. “We seem to be living in an age where litigation is the obvious norm,” he said, and added that some organizations “make a nice income for their group by doing litigation.”

He also said that Congress needs to “step up and clarify” how national monument designations under the Antiquities Act are done in the future.

Bishop said he plans to introduce legislation to begin that process once the report has been “seen and digested by everybody.” He added that would be “sooner rather than later.”

Both of New Mexico’s senators, Democrats Tom Udall and Martin Heinrich, sharply criticized the lack of information in Zinke’s review summary—and have supported maintaining New Mexico’s national monuments as they are.

“We have an Antiquities Act that is working, and I don’t think that Congressman Bishop has the same view of what that has accomplished, and what it has meant for communities, as the majority of Americans and the majority of westerners,” Heinrich said. “He has prosecuted a war on the Antiquities Act, and frankly, a war on public lands for a long time. He has an elected position so he can do that, but when it comes to the Senate, I will fight him tooth and nail.”

Julia Bernal of the Pueblo Action Alliance also spoke against the review process. She defended New Mexico’s monuments and public lands, lands she said “have always been sacred.”

Rio Grande del Norte and Organ Mountains-Desert Peaks national monuments, as well as Bears Ears National Monument in Utah, were promised to Indigenous people, she said, and it’s important that the United States government keep its promises. She asked the Trump administration to “honor our promises, honor our treaties and honor our youth who need these lands for Indigenous ways of life.”

Eddie Paul Torres, Chairman of the All Pueblo Council of Governors and former Governor of Isleta Pueblo

Eddie Paul Torres, Chairman of the All Pueblo Council of Governors and former Governor of Isleta Pueblo, said that Bears Ears, which Obama designated to be jointly managed by federal agencies and southwestern tribes, contains “innumerable and irreparable sites we consider sacred.”

On Thursday, The Washington Post reported that Bears Ears is among the monuments that Zinke wants to reduce. That report is “according to multiple individuals briefed on the decision.”

Torres added that the All Pueblo Council of Governors supports New Mexico’s monuments, which also include sites that are important to the pueblos. Those sites are under constant threats, he said, from erosion, off-road vehicles, human uses, and now, the Trump administration.

“It is an immediate and unacceptable risk,” Torres said.

Presidents have the authority to create national monuments under the Antiquities Act. Signed into law by President Theodore Roosevelt in 1906, the law gave presidents the authority to bypass Congress and protect federal lands that have archaeological or historical sites or are scientifically significant. Sixteen presidents, including eight Republicans and eight Democrats, have used the act to designate national monuments.

In April, President Trump signed an executive order directing Zinke to review monuments designated since 1996 that are larger than 100,000.

“A hundred years from now, New Mexicans will say, ‘Why didn’t you make them bigger?’” he said. Culture, wildlife and landscapes represent the essence of New Mexico, he said. “Those things exalt our identity. You don’t mess with that.”