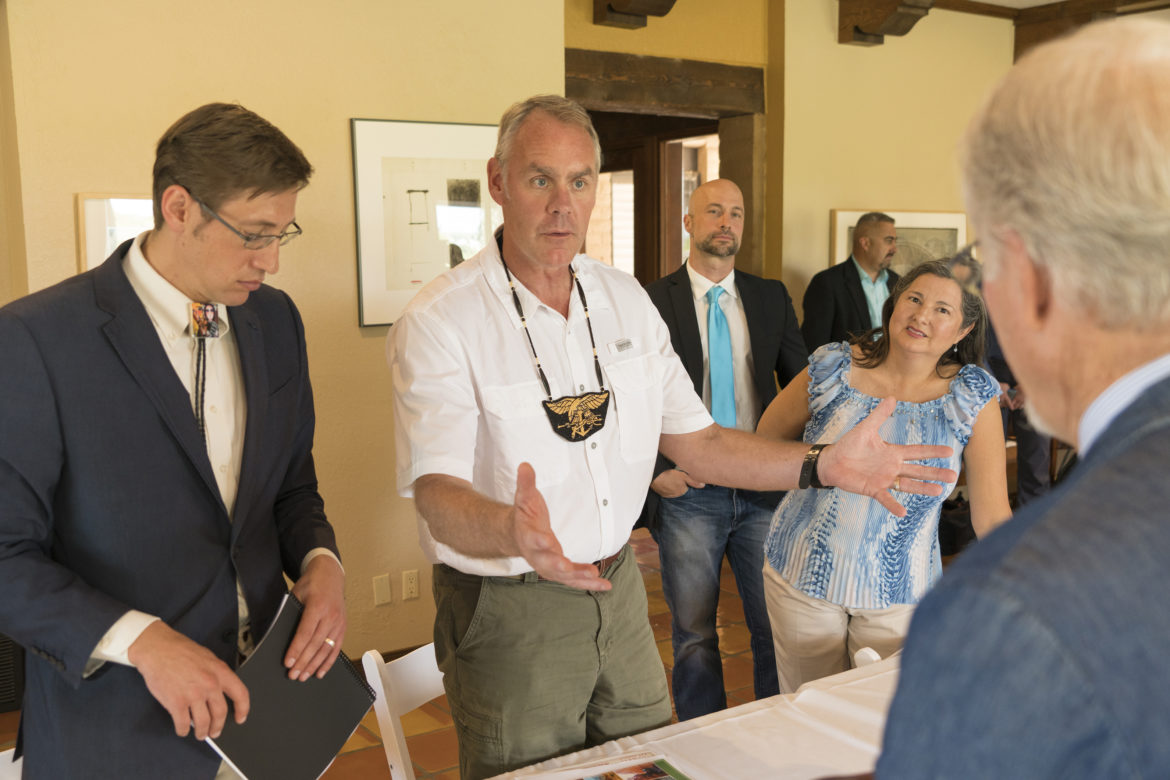 When U.S. Department of the Interior Secretary Ryan Zinke came to New Mexico in July as part of his review of national monuments, he met with various groups, including veterans. Zinke retired from the military in 2008 after 23 years as a Navy SEAL.

Brett Myrick, who lives near Silver City, had been trying to get a hold of Zinke, even visiting Washington, D.C to try and connect with him.

“I know with the transition he was super busy, but I finally wound up taking him on a hike at Organ Mountains-Desert Peaks,” Myrick said.

That national monument near Las Cruces is one of two in New Mexico the secretary was evaluating under orders from President Donald Trump. At the urging of Utah Republican Sen. Orrin Hatch, Trump called for the review of all monuments designated since 1996 that are larger than 100,000 acres. That included two in Utah, Grand Staircase-Escalante and Bears Ears, as well as 25 others nationwide.

“Ryan Zinke and I both served in SEAL teams,” Myrick told NM Political Report, adding that along with other veterans, they hiked for more than two hours in the monument. “First thing you do is start dropping names of other people on the team, and that opens up the door for people to walk together in a canyon very comfortably.”

But he and other veterans weren’t there to just talk about mutual acquaintances or their experiences overseas. They were urging the secretary to protect the integrity of Organ Mountains-Desert Peaks National Monument. President Obama designated the area as a national monument in 2014 after more than two decades of work by local and tribal officials, Latino leaders, businesess, community members, sportsmen and conservationists.

After the hike, Myrick and the veterans thanked the secretary for meeting with them, but publicly noted they were discouraged after he skipped a meeting organized by local officials in Las Cruces.

At the end of August, they followed up with a letter.

More than 35 active and retired military personnel and veterans told the secretary they were concerned by his direction on public lands, including plans to change existing monuments like Grand Staircase-Escalante and Bears Ears. “Public lands are a physical manifestation of ‘America the Beautiful,’” they wrote, “representing one of the reasons we chose to serve our country.”

“From the regular person who just likes to hike, elected officials, from city level on up to the federal level, business leaders, we bombarded him here in New Mexico,” said Myrick. “He knows beyond a shadow of a doubt how the majority of people in New Mexico feel. And if he goes the other route, then we know where he stands.”

Now, it may finally be clear where the secretary stands—the Washington Post recently reported on a leaked copy of the report he submitted to the White House. What’s not clear is what the secretary understands about national monuments, the law that allows presidents to create them or how public lands are managed.

Widely expected to recommend changes to Organ Mountains-Desert Peaks, Zinke also recommended “amendments” to Rio Grande del Norte in Taos County. He did not mention reducing the size of either monument, but instead wrote about prioritizing “public access” and revising resource management plans to continue to protect traditional use, tribal use and hunting and fishing rights.

During a Senate Energy and Natural Resources Committee hearing, Heinrich shifted the conversation with a high ranking U.S. Bureau of Land Management (BLM) official from the maintenance of rights-of-way for electric lines to errors and false claims in Zinke’s review.

The U.S. Department of the Interior oversees the BLM and that agency manages Rio Grande del Norte and Organ Mountains-Desert Peaks.

“I have to take the opportunity to raise a couple of questions with you,” Heinrich said to John Ruhs, the BLM’s Acting Deputy Director of Operation. “I was incredibly concerned in reading the report summary on the two monuments in New Mexico to note there were more than a few simple factual errors included.”

Roads had not been closed within the Rio Grande del Norte National Monument, Heinrich noted, nor had ranching ceased due to road closures as the report stated. He also pointed out that Organ Mountains-Desert Peaks isn’t on the U.S.-Mexico border. “That’s also not true because on the recommendation of the U.S. Customs and Border Patrol, the boundary of the monument was actually established five miles north of the international border,” Heinrich said.

The Democratic senator, a long-time conservationist and sportsman, seemed perturbed that the review called for changes to Rio Grande del Norte and Organ Mountains-Desert Peaks to protect hunting and fishing rights.

“Nothing could be further from the truth,” Heinrich said, explaining that he’s hunted “everything from Mearns quail to javelina” in the southern monument and confirming that the state’s largest membership sportsmens organization said hunting and fishing access actually improved since Obama’s designation of the Rio Grande del Norte.

Heinrich then asked Ruhs if BLM staff had seen the report before Zinke submitted it to Trump.

Ruhs said they were asked questions but not given the chance to review the document for accuracy.

“I can assure that I myself and the Bureau of Land Management were not part of the writing of the reports. We did answer questions and provide data as necessary,” Ruhs said. “I haven’t seen the report, so I can’t answer the questions up front, but I would be willing to take those questions and concerns back with me to the department and ask.”

New Mexico Sen. Tom Udall called the process a “sham to justify the administration’s extreme attack on public lands,” and said it was a waste of resources.

“Our national monuments have been created after years of public input, scientific study, discussion to reach consensus, and careful consideration of maps and data,” Udall said. “They now are beloved by the American people, and major drivers of our tourism economy in New Mexico and around the country. ”

During the review process, Zinke spent months doing “research,” Udall said, but “declined to attend public meetings to hear from local citizens, rejected invitations to meet with stakeholders, including tribal members, and never even set foot in some of the monuments, like Rio Grande del Norte.”

A waste of time?

Since Trump signed an executive order in April directing Zinke to review the monuments, conservation groups have threatened lawsuits.

Signed into law by President Theodore Roosevelt in 1906, the Antiquities Act gave presidents the authority to bypass Congress and protect federal lands that contain archaeological or historical sites or are scientifically significant. In the last 110 years, 16 presidents, including eight Republicans and eight Democrats, used the act to designate national monuments.

Until the White House makes a move on the monuments, everyone’s legal hands are tied. But the New Mexico Wilderness Alliance is one of the groups that has threatened to sue over the review.

“Certainly, if the boundaries were changed, that’s a no-brainer for us, we would sue,” said the nonprofit’s staff attorney, Judy Calman, adding she believes the president lacks the authority to do that. When it comes to potential management changes, that’s where things get murkier. “The report was so vague that it’s hard to know exactly what those would look like,” she said. “And some management changes would make us more likely to sue than others.”

Their focus is on anything that will cause lasting harm to the monuments, she said.

When it passed the Federal Land Policy and Management Act in 1976, Congress specifically stated that the Interior Secretary cannot modify or revoke what are called mineral withdrawals—the removal of a specific area, like a national monument, from certain types of development.

“Our basic message all along has been the Antiquities Act gives the president the authority to (designate a monument), not to take it away,” Calman said, explaining that when people say presidents have made changes to monuments in the past, those actions all predate 1976 and the Federal Land Policy and Management Act.

Mark Allison, the New Mexico Wilderness Alliance’s executive director, said Trump never should have issued the order and New Mexico’s monuments should not have been included in the review. Both monuments, he said, were settled, and had overwhelming support in both counties.

“I don’t get angry a lot; I’m an optimist at heart, that’s why I’m an advocate,” Allison said. “But the disingenuousness of the process, the inaccuracies in the report and the Orwellian way they were using language, was just infuriating.”

He wonders if the process was actually focused on targeting the two large Utah monuments, which Zinke recommended reducing in size. “Was the rest of this”—the other 25 monuments reviewed—”just throwing dust up in the air as a way to distract from that?” he asks. “Was this just a cowardly way to have a pretense of a process?”

Not only was Hatch behind Trump’s executive order, as we have reported previously Utah Rep. Rob Bishop has condemned national monument designations, including Rio Grande del Norte’s, and tried to pass legislation to limit presidential authority to designate national monuments under the Antiquities Act.

Allison said the whole thing felt like a waste of time for everyone involved.

“We couldn’t ignore it, we had to do the organizing work,” he said. “But there are so many other things we could have been doing instead.”

The increasing polarization of conservation issues is unfortunate, he said. In 1964, the Wilderness Act had a Republican sponsor, and like all the important environmental legislation of the 1960s and early ‘70s, passed with widespread, bipartisan support.

Now, conservation is just one more issue people use to “beat up on one another,” he said, though he remains hopeful.

“D.C. is one thing, but locally, we’ve seen businesses come together with sportsmen, with the faith-based groups, a coalition of pueblos and land grant heirs,” he said. “New Mexico, we’re the adult in the room, and we can be a model nationally for how people can treat one another and get stuff done.”