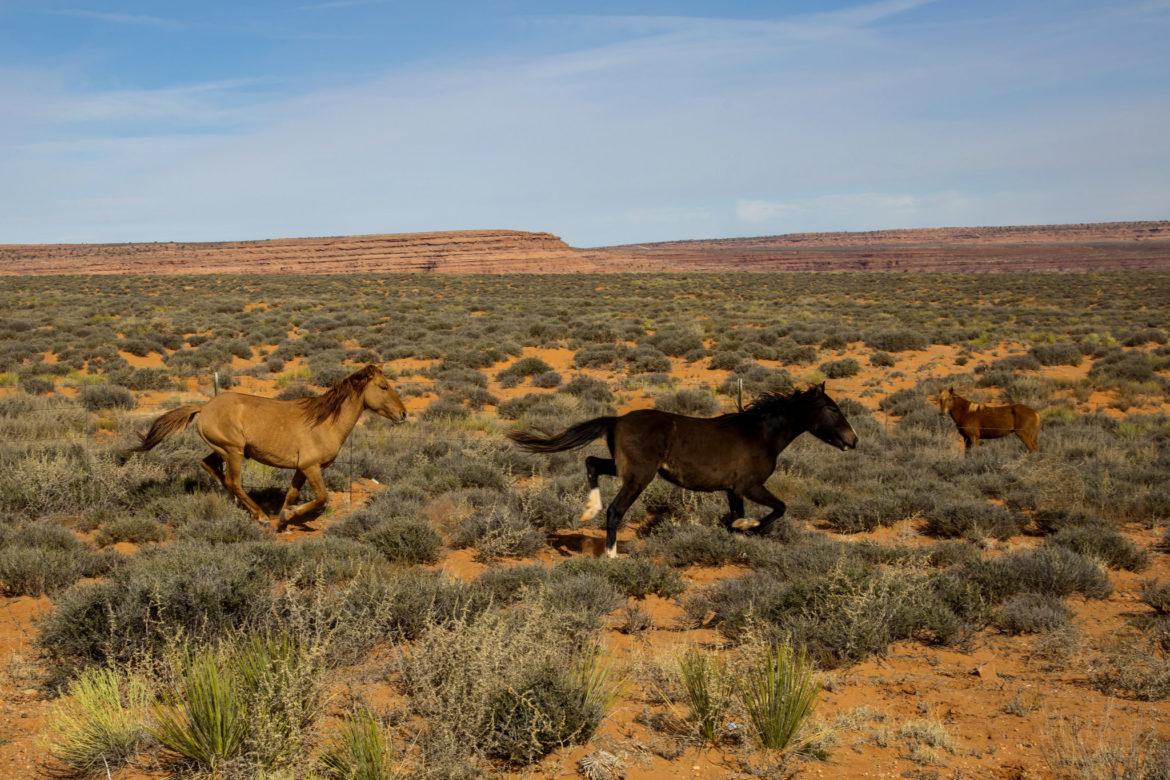 Up to 40,000 wild horses wander the Navajo Nation, roaming across 27,000 miles of deep canyons, rugged hills and huge mountains, according to aerial estimates from the Bureau of Indian Affairs. In just five years, the population is expected to double. Already the feral horses compete with domestic animals, sheep or cattle, and wildlife for water and sparse vegetation. Yet a Navajo Nation oversight committee recently denied an $800,000 funding request from the tribe’s Fish and Wildlife Department to help reduce the horse population, leaving the nation with few alternatives.

“Right now, there is no program,” Leo Watchman, Navajo Nation Agriculture Department director, told me recently. The department denied the request, in part, because the nation’s other priorities, including health care and education, take precedent. “You need to put dollars forward to gain management,” Watchman said, “but the issue will come up again.”

Feral horses have become a problem not only among the Navajo but also among other tribal officials managing reservation lands throughout the West. The Colville and Yakama tribes in Washington, the Confederated Tribes of Warm Springs in Oregon and the Shoshone-Bannock in Idaho have all been plagued by out-of-control horse populations. The problem presents a unique quandary for tribes: What do you do with a creature that has been an integral part of your culture, but has wreaked havoc on land, water, traditional foods and wildlife?

The Navajo Nation has long grappled with how best to control feral and domestic horses abandoned by owners unable to care for them. In 2013, then-Navajo President Ben Shelly publicly supported a horse slaughter operation in Roswell, New Mexico. Shelly approved $1.4 million to allow Chapter Houses, a form of local government on the Navajo Nation, to inspect and process the horses for selling. Horses obtained in tribal roundups since around 2011 have either been sold to buyers for resale, adoption or slaughter in processing plants in Canada or Mexico, which export the meat to consumer markets in Europe and Asia.

Because tribes are sovereign nations, their management differs from the way the U.S. government manages feral horse populations. The Bureau of Land Management, which oversees the 70,000 wild horses and burros on public lands in the West, promotes adoption. According to the agency, each animal that goes unadopted can cost nearly $50,000 in care. The U.S. government has prohibited sending feral horses to slaughter since 1971, with the passage of the Wild Free-Roaming and Burros Act. The act, however, allows the BLM to euthanize sick or dangerous horses.

Tribal officials say the feral horse population burgeoned when the last U.S. horse slaughterhouses closed in 2007. U.S. Court of Appeals in the Fifth and Seventh Circuits upheld state laws in Texas and Illinois prohibiting sale or possession of horsemeat and horse slaughter. Congress also pulled funding for meat processing prohibiting new plants from opening and wild horses became devalued. Simultaneously, the U.S. began hitting an economic downturn, hay prices were at an all-time high and many, unable to care for them, let their horses go.

In March, Gloria Tom, Navajo Fish and Wildlife Department director, broached the idea of a horse hunt, telling The Navajo Times “previous attempts to trap, round up, or allow horses to be adopted had not made a large enough impact.” But that proposal was quashed after an outcry from horse enthusiasts and advocacy organizations, who met with the tribal Wildlife Department in May to promote a more humane way of managing herds. The Salt River Wild Horse Management Group and other groups argued for the use of darts containing a contraceptive called porcine zona pellucida, or PZP. Citing 30 years of research and studies done on urban deer populations, the group says that the feral horses become infertile when PZP is injected yearly for five years.

Recently, on an early September afternoon I met with Leland Grass of Diné for Wild Horses. Near the Navajo National Monument, about half-hour from Kayenta, Arizona, his home is abutted by a corral that contains two horses from the wild. Grass, part of the strong vocal opposition to the horse roundup and slaughter-sale in 2013, supports more local control and management of feral bands through Chapter Houses, where officials could maintain bands and move stallions before mating. He also works to educate the Diné, or Navajo people, whom have long included horses as part of their creation stories. “Our people don’t like roundups because that’s not our way,” Grass said. “If you destroy something that’s living, it’s going to grow back again and come back stronger.”

Some Chapter Houses have held local roundups, borrowing temporary pens and other equipment from the Navajo Agriculture Department to trap horses or unclaimed livestock. They catch the animals at area watering holes and  call the department to have them removed. The Tiis Tsoh Sikaad, or Burnham Chapter, in Northwest New Mexico is one local government taking charge by working with the BIA on a fencing project to keep livestock and feral horses from roaming free.

Whatever the solution — roundup, birth control, horse hunt or adoption — it will cost money. The issue, Watchman said, will be discussed again during a natural resources conference on the reservation in November.