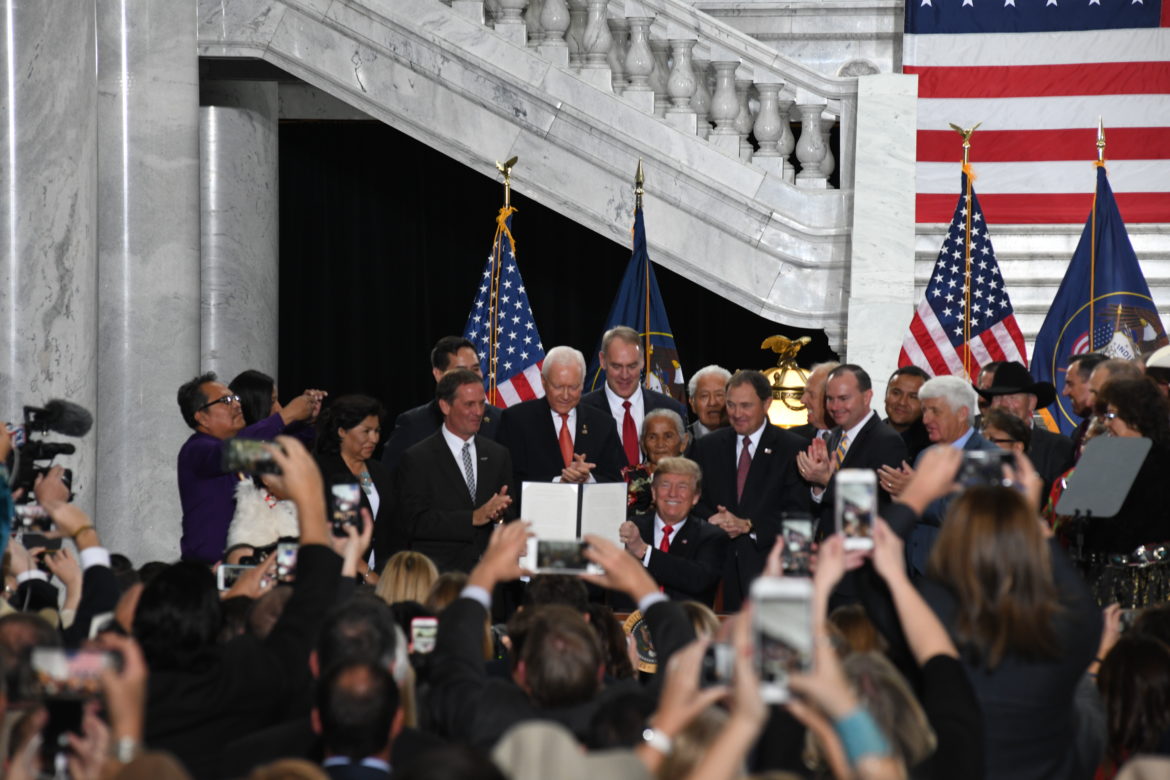 The Trump administration announced big changes to some national monuments, but U.S. Department of the Interior Secretary Ryan Zinke has said the boundaries of two monuments under review in New Mexico will be left intact.

A day after President Donald Trump visited Utah and announced he would drastically reduce the size of Bears Ears and Grand Staircase-Escalante national monuments, Zinke released his recommendations for the other monuments under review.

During a press call on Tuesday, Zinke said he based his decision not to alter boundaries of the two New Mexico monuments on conversations with the governor, the state’s congressional delegation, ranchers, conservationists, and city officials. But, he said, the proclamations for both monuments must be changed to ensure traditional grazing practices continue and to allow Border Patrol to review “possible improvements” in southern New Mexico.

The final report to Trump notes that the Organ Mountains-Desert Peaks designation affects “border security” and its proclamation restricts motorized transportation close to the U.S.-Mexico border.

But the monument does not abut the border, just one of the mistakes Sen. Martin Heinrich pointed out during a Senate Energy and Natural Resources Committee hearing when the draft report was leaked to the press in September.

Sen. Tom Udall issued a statement after Tuesday’s report came out, saying it appears Zinke is still relying on “hearsay and bad data.”

“While Secretary Zinke has assured me that he doesn’t plan major changes, the question of New Mexico’s monuments is now in President Trump’s hands,” Udall said. “Until we see what the president will sign, this fight is not over, and New Mexicans should keep calling and writing and making their voices heard.”

Udall appears unconvinced that the the Trump administration will fully protect the two monuments.

“When it comes to decisions about the future of public lands, Americans deserve an open and above-board approach – not the sham process the Trump administration has used to try to justify loosening protections,” Udall said. “President Trump and Secretary Zinke withheld information from Congress and the public, declined public meetings about their plans, made recommendations in secret, announced part of their decision, and — only then — released a report attempting to legitimize their conclusions.”

He added that people are right to be “suspicious” of the administration’s motives.

“After President Trump’s proclamation drastically cutting and re-shaping Utah’s Bears Ears and Grand Staircase-Escalante national monuments, New Mexicans and the American people are right to be outraged,” he said.

During Tuesday’s press call, Zinke did criticize one feature of Organ Mountains-Desert Peaks, noting that some designations were not consistent with the Antiquities Act because they do not protect objects. “I’ll give you one: a World War II bombing crater you could only see from Google Earth,” he said. The crater is not an “object,” he said, and ticked off a list of qualities that aren’t physical objects:  “Stars, biological diversity, remoteness. Emptiness.”

Zinke was referring to previous administrations, which have protected places for less tangible reasons than that they host a historic monument or archaeological site. Some places have been deemed special because they are biologically diverse, or are far enough away from urban centers and development that they lack light pollution.

Meanwhile, a coalition of tribes announced a lawsuit against the Trump administration for its actions on Bears Ears.

According to Trump’s proclamation modifying Bears Ears, not all the objects identified in President Obama’s 2016 monument declaration are “unique.” Nor are they of “significant scientific or historic interest.”

On Monday, the Navajo Nation, Ute Indian Tribe, the Hopi Tribe, the Pueblo of Zuni and the Ute Mountain Ute Tribe filed a lawsuit in federal district court to halt the administration’s plans to shrink the monument by 85 percent.

“Creation of the monument was a promise to the tribes that their sacred land would be protected,” said Justin Pidot, an attorney working with the Native American Rights Fund, which represents three of the tribes in the lawsuit. “Yesterday, the president broke that promise.”

Pidot said tribes “entirely disagree” with the president’s assertion that some of the objects protected by the Obama administration aren’t unique or significant.

Regardless of the disagreements between the tribes and Trump, the president doesn’t have the legal authority to alter the monument, Pidot said.

“Our Constitution is one of limited, delegated powers,” he said, noting that Congress gave presidents the ability to create, not modify or revoke, national monuments. Trump’s actions on many issues, including national monuments, he said, “demonstrate this administration has a reckless disregard for the Constitution and the limits it places on federal power.”

The Obama administration worked closely with local tribes while deciding whether to designate the area as a national monument, said Ethel Branch, Attorney General of the Navajo Nation Department of Justice.

“We felt that previous approaches engaging tribes in the management of lands important to us were inadequate, so we worked very closely with the administration to come up with an approach that would both ensure meaningful engagement with the tribe and also comply with legal parameters [of the Antiquities Act],” Branch said. “We were very pleased with the model in the Obama proclamation.”

That hasn’t been the case during the review process in 2017.

“President Trump and Secretary Zinke haven’t consulted with us—anything they’ve come up with is their preconceived notion of what they’d like us to have,” Branch said. “We certainly didn’t have a seat at the table.”

The attorneys for the tribes all said they will take the legal battle to the U.S. Supreme Court if necessary.

“We’re committed, and we’re going to stand in defense of Bears Ears, at least from the Navajo Nation side, to the very end,” Branch said.

Jeff Rasmussen, attorney for the Ute Indian Tribe agreed. “We expect to prevail in the first round, and it will be the other side that will be appealing, and trying to get it to the Supreme Court,” he said. “But if we were to need to, we would certainly do that, too.”

In his press call on Tuesday, Zinke responded to criticism leveled at the Trump administration for its actions in Utah.

“I’ve seen the press hits,” he said, adding that no lands have been transferred or sold. “This is not about energy. There are no oil and gas assets. There is no mine within Bears Ears Monument, before or after.” He said. “So the argument that somehow, President Trump stole land is nefarious, it is false, it is a lie.”

On Monday, the outdoor clothing company Patagonia replaced its normal homepage with a black-and-white note that reads, “The President Stole Your Land.”

Zinke called the company’s move an example of fundraising for “special interests.”

“What one square inch of land was stolen? The federal estate remains intact,” he said. “I think it’s shameful and appalling they would blatantly lie to gain money in their coffers.” The secretary said he doesn’t yield to pressure. “Sound public management is not based on the threats of lawsuits,” he said. “It’s based on doing what’s right.”

Meanwhile, Zinke does support creating a new national monument in his home state of Montana. Doing so would protect the Badger-Two Medicine from energy development, something the Blackfeet Nation and conservation groups have been striving to do for years.