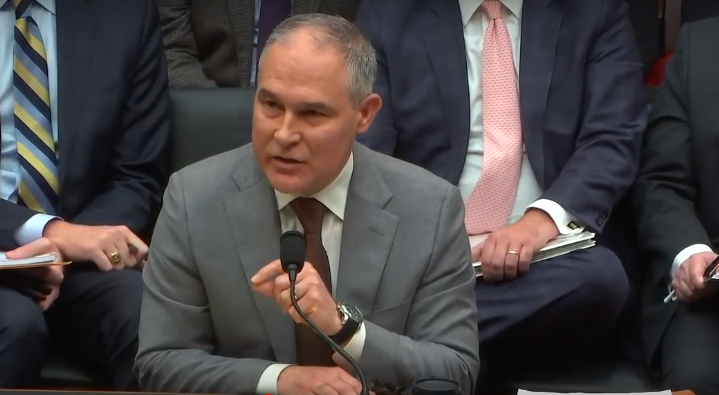 On Thursday, the Trump administration continued to make its priorities clear when it comes to industry, the environment and climate change.

Just days after President Donald Trump and U.S. Department of the Interior Secretary announced changes to national monuments, Zinke’s agency delayed plans to reduce methane emissions from the oil and gas industry. On Thursday, the U.S. Bureau of Land Management published a rule to delay implementation of the Obama-era requirement until January 2019.

Methane, a greenhouse gas, contributes to the warming of the planet. It is also a marketable product—the same natural gas many people use to cook with and heat their homes.

The EPA was established in 1970, via an executive order signed by President Richard Nixon. Its mission is to “protect human health and the environment.”

During his opening statement, Pruitt said he has had a “very, very consequential and I think, exciting ten months” at EPA, and has focused his efforts on three core principles.

The three principles include the rule of law, process and a commitment to federalism, he said. “Rule of law matters,” he said because “if we act untethered to a statute, it creates uncertainty in the marketplace,” Pruitt told members of Congress. “And those that have expectations placed upon them,” he said, “don’t know how to conduct themselves.”

Barton also questioned the EPA’s decision during the Obama administration to classify carbon dioxide, a greenhouse gas, as a pollutant. In particular, he was dismayed that the agency had relied upon data from the Intergovernmental Panel on Climate Change (IPCC), the United Nations scientific body that assesses the state of climate science. He urged Pruitt to revisit the finding classifying carbon dioxide as a pollutant.

Barton also asked Pruitt when he would set up a debate among scientists over climate change.

Pruitt answered that over the past several months, the agency has been working to set up a “red team, blue team” debate on climate change that will give the public an “objective, transparent, real time review of questions and answers around the issue of CO2.”

Doing so, Pruitt said, would be one of the “most important things we can do for the American people,” and he criticized the Obama-era EPA for relying on “borrowed work” of a third party, referring to the IPCC.

The red team-blue team debates, he said, could begin as early as January.

More than a half-century ago, scientists explained to President Lyndon B. Johnson that the burning of fossil fuels was increasing carbon dioxide levels in the atmosphere. In 1965, Johnson’s science advisory committee wrote in a White House report: “Through his worldwide industrial civilization, Man is unwittingly conducting a vast geophysical experiment. Within a few generations he is burning the fossil fuels that slowly accumulated in the earth over the past 500 million years.” The carbon dioxide humans were injecting into the atmosphere would cause changes, they wrote, that could be “deleterious from the point of view of human beings.”

Johnson addressed Congress that year, 1965, and spoke of rising carbon dioxide levels: “This generation has altered the composition of the atmosphere on a global scale through radioactive materials and a steady increase in carbon dioxide from the burning of fossil fuels,” Johnson said.

Twenty years later, NASA scientist James Hansen testified before Congress, urging action. In 1988, he said that it was “99 percent certain” that a warming trend observed across the planet was attributable to greenhouse gases, and not just natural variability.

And just this month, the U.S. government released its own Climate Change Special Report and the fourth volume of the National Climate Assessment. It’s the culmination of work by 13 federal agencies mandated by Congress to assess climate science and climate change impacts every four years, and it underscores the critical challenges the United States faces due to increasing global temperatures.

According to the assessment’s authors, human activities—such as the burning of fossil fuels—are the dominant cause of this warming. “For the warming over the last century,” the assessment’s author’s write, “there is no convincing alternative explanation supported by the extent of the observational evidence.”

Pruitt is the former Oklahoma Attorney General and prior to joining the Trump administration sued the EPA. In 2011, he sent a letter to EPA in 2011 complaining that the agency was overestimating air pollution emissions from oil and gas operations in the state. Pruitt’s letter, as reported by The New York Times in 2014, was written by lawyers for Devon Energy Corporation, an oil and gas company. Pruitt’s staff copied the letter on state letterhead, then sent it to the EPA with his signature.

Earlier this year, Pruitt also announced his agency would not implement a methane rule similar to the one Zinke delayed this week, and he issued a two-year stay. The following month, a federal court called Pruitt’s suspension fo the rule “unauthorized and “unreasonable” as well as arbitrary, capricious and in excess of the agency’s statutory authority.

Video of Thursday’s hearing is online at: https://energycommerce.house.gov/hearings/mission-u-s-environmental-protection-agency/