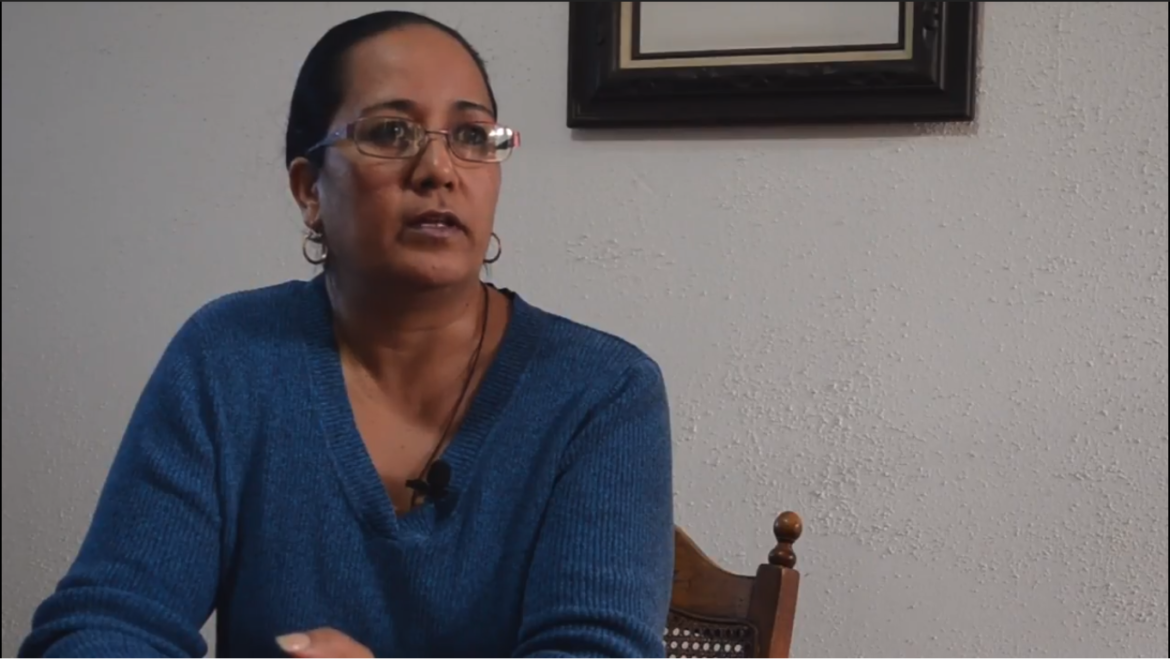 Martha Lorena Rivera of Alamogordo had been checking in with Immigration and Customs Enforcement (ICE) since 2011 to renew a stay of removal she said she’s been given annually for humanitarian reasons. In past years she received approval in the mail, but this year was different.

On the morning of Oct. 10, her “world came down,” she said in an interview with New Mexico In Depth. When she presented her application in late September at the El Paso ICE processing center, agents gave her a follow-up appointment for two weeks later.

Rivera was nervous, dropping her daughter at school before heading to El Paso for the appointment. She was denied, and no reason was given. The mother of three was granted a few days to sort out plans for her 8-year-old daughter, Bella. After placing a tracking device on her ankle, ICE allowed Rivera to turn herself in by Oct. 16.

Rivera said those extra days just weren’t enough time to get her affairs in order. Her daughter Bella is a U.S. citizen who has underdeveloped lungs and is a special needs student. Rivera separated from her spouse in 2009, and she is the only caregiver for Bella, who has never lived in Mexico.

Rivera has two older children, a son in Dallas, and a daughter who is a student at the University of New Mexico who is registered in the Deferred Action for Childhood Arrivals (DACA) program.

During the few days ICE gave her to wrap up her affairs, Rivera did not eat or sleep.

“But in front of my daughter, I was strong. However, she knew something was happening,” Rivera said.

Rivera looked for a sanctuary in Alamogordo, but couldn’t find anyplace that would let her in. What came next was an answer to her prayers. A friend called her.

“God put this person in my path,” Rivera said.

Rivera shared her situation with her friend, who answered by referring her to “Café.”

“Why would I want coffee?” she said as she chuckled. “No, seriously, that is what I thought!”

Rivera is the second person to receive sanctuary at the center and at least the third immigrant to seek refuge in a church in New Mexico this year. She will be staying at Holy Cross until her case is heard.

Call of the Gospel drives church to provide refuge

“It’s the call of the Gospel,” said Smith, in an interview, about why Holy Cross took Rivera in. “…we are to provide food for the hungry, shelter for the homeless, and care for those in need. … These are people who can not return to their home because immigration officials would pick them up, they know where they live, and they would be deported.”

Smith said his hope is two-fold: to raise awareness about the plight of those in fear of deportation, and to help local people recognize the unfairness and lack of necessity to deport such people. He draws a distinction between Rivera and one other immigrant currently provided refuge at Holy Cross, Jorge Taborda, and those who may have committed criminal acts.

“If they were running away from the law, as a criminal, I’d say I’m sorry we’ll not accept you,” he said.“That’s not the case” in Rivera and Taborda’s plight.

Smith said Holy Cross has the support of Bishop Oscar Cantú of the Diocese of Las Cruces as well as Franciscan church leaders in Rome.

“People use the term sanctuary, we choose to use Franciscan hospitality because sanctuary seems to imply that they are safe,” Smith said. “But if immigration officials come with a search warrant, with their name, and signed by a judge, I cannot do anything about that.”

No reason given for deportation

Rivera meets all the qualifications set forth by the Department of Homeland Security for a stay of removal, according to Johana Bencomo, CAFé community organizer, who noted Rivera’s annual approvals since 2011.

ICE provides a number of factors that can determine the denial of an application:

• Failure to submit medical documentation that supports your reason for this request, if applicable
• Failure to submit your statement or summary that explains why you submitted this request
• Record of criminal activity
• Threat to self or others
• Inaccurate, incomplete or untruthful information
• Not currently under a final order of deportation or removal
• Discretion of the Field Office Director or design

There have been no changes to Rivera’s application, according to Bencomo.

New Mexico In Depth sought answers from the agency, but a spokesperson at the El Paso processing center refused to comment about Rivera’s case.

“In Martha’s case, we are working to engage our members of Congress like Senator Heinrich, Senator Udall, even Congressman Pearce to advocate on her behalf,” Bencomo said.

In the meantime, Rivera’s son, a citizen through marriage, has petitioned for his mother to gain residency.

“What I want to ask from the community is to support us, because it’s obvious that not everyone does, but those who do, I ask for them to be our voice, to talk for us and to defend us,” Rivera said.

Films were produced by Xchelzin Peña, who holds New Mexico In Depth’s 2017/2018 fellowship for a current or recently graduated journalism student at New Mexico State University.