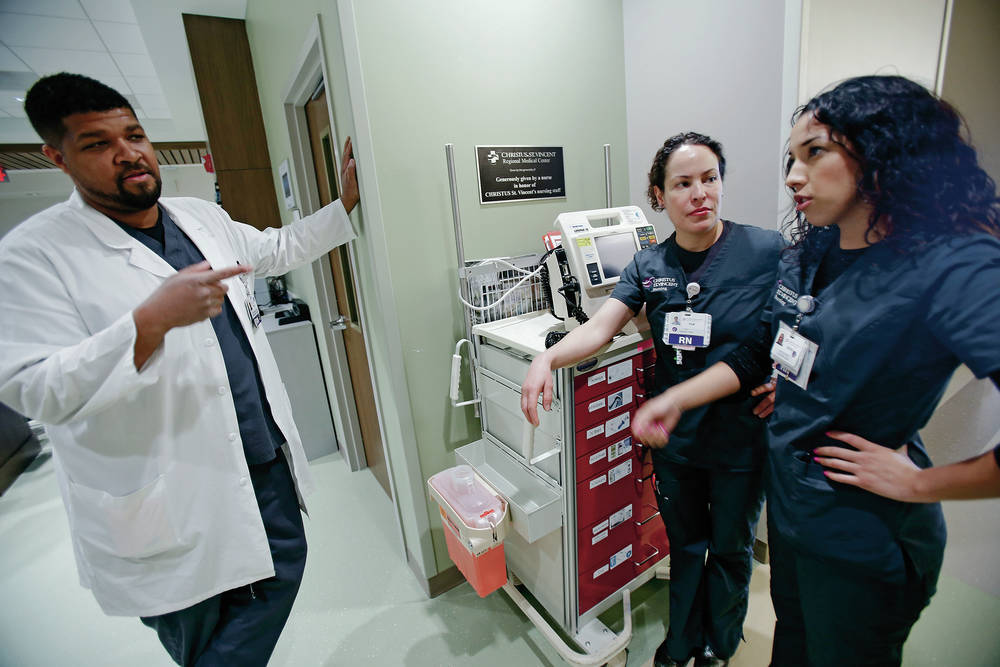 Wayne Littlejohn, clinical manager of critical care services at St. Vincent's Regional Medical Center, speaks Friday with Pam Sisneros, center, and Quaila Vigil, both registered nurses at St. Vincent's. The Legislature has 30 days to pass a budget, but only a few days to pass a nursing compact -- a bill that will ensure nurses from other states can use their licenses in New Mexico. It's arcane but important to hospitals in a state with a shortage of health care professionals.

Lawmakers face a hard deadline this week to make sure that dozens or even hundreds of nurses can continue working in New Mexico.

Legislators have until midnight Friday to approve a new nurse licensing compact, an update to an agreement that allows nurses licensed in other states to practice in New Mexico without getting a separate certificate.

Hospitals say the compact is key to recruiting in a state facing a shortage of medical professionals. Missing the deadline to join the new system would leave New Mexico with fewer nurses to care for patients, they say.

Though not much usually happens during the first days of a legislative session, the high stakes amid a particularly rough flu season have forged what appears to be a bipartisan consensus that lawmakers must approve the compact and fast during their 30-day gathering that begins at noon Tuesday.

“We’ll get it done by Thursday or maybe even Wednesday,” said Senate Minority Leader Stuart Ingle, R-Portales. With Sens. Gay Kernan, R-Hobbs, and Howie Morales, D-Silver City, he is sponsoring a bill to join the new compact.

The bill hits home for Ingle. His district sits on the border with Texas, and he says some nurses at his local hospital live in the Lone Star State and commute into New Mexico, an arrangement made possible by the existing compact.

New Mexico has for years been one of 25 states in what is known as the Nurse Licensing Compact.

“All our border hospitals use people from across state lines,” Ingle says, adding that it works the other way, too, with some New Mexican nurses employed in neighboring states.

Even in Santa Fe, missing the deadline on the nursing compact would likely mean fewer staff at the local hospital.

Patrick Carrier, CEO of Christus St. Vincent Regional Medical Center, says 59 nurses live out of state and work at the hospital. Known as “traveler nurses,” nearly two dozen of them do not have a license in New Mexico. Another 25 nurses live in the area but got their license elsewhere, he said.

“If the compact would not pass before the 19th, those nurses operating under the compact currently would not be able to work here,” Carrier said. “… We’d have to close some of our patient beds.”

The predicament reflects a broader shortage of nurses.

The workforce of nurses is growing older across the country and the rest of the population is aging, too, Carrier says.

There are simply not enough nurses locally to care for patients, he adds.

While lawmakers are on board with the new compact, some have expressed frustration that the state must scramble to avoid a staffing crisis.

“We should have had word on it sooner,” Ingle says.

The new compact, known as the Enhanced Nurse Licensing Compact, has evolved from the existing agreement. It includes changes in the requirements for background checks and how the agreement is governed by the various states that have joined.

The compact has been in the works since 2014. It was designed to be implemented either at the end of 2018 or sooner if approved by 26 states.

Officials from the New Mexico Nurses Associations say the state aimed to give nurses ample time to review the new compact and have ample time to address it during the legislative session.

But to the surprise of state health officials, 26 states signed on to the new compact by the summer, putting in place the earlier deadline and forcing lawmakers to act faster.

All but a few of the states in the original compact have already moved on to the new agreement, leaving New Mexico with Colorado, Rhode Island and Wisconsin. Neighboring states Texas, Utah, Oklahoma and Arizona have already joined the new compact. In all, 27 states have approved the new compact and nurses in states like New Mexico will be grandfathered in once the compact is approved.

While there is widespread support for approving the new compact, some facets are controversial.

For example, the compact would require states to use only one particular nursing exam. And a new organization would oversee the compact, though observers say they have not seen its bylaws or otherwise understand how exactly it will function.

Some nurses — including leaders of the state’s biggest nurses’ union — have suggested that legislators sunset the new compact, effectively setting an expiration date. This would force lawmakers to revisit these issues and vote again in the future on whether to remain in the agreement.

Though more states have signed on to the new compact than had signed onto the old agreement, many of the biggest states are not on board.

And even with the agreement, New Mexico faces a long-term challenge in recruiting and training enough nurses to care for a state where an increasing number of people have health insurance and the population is growing older.