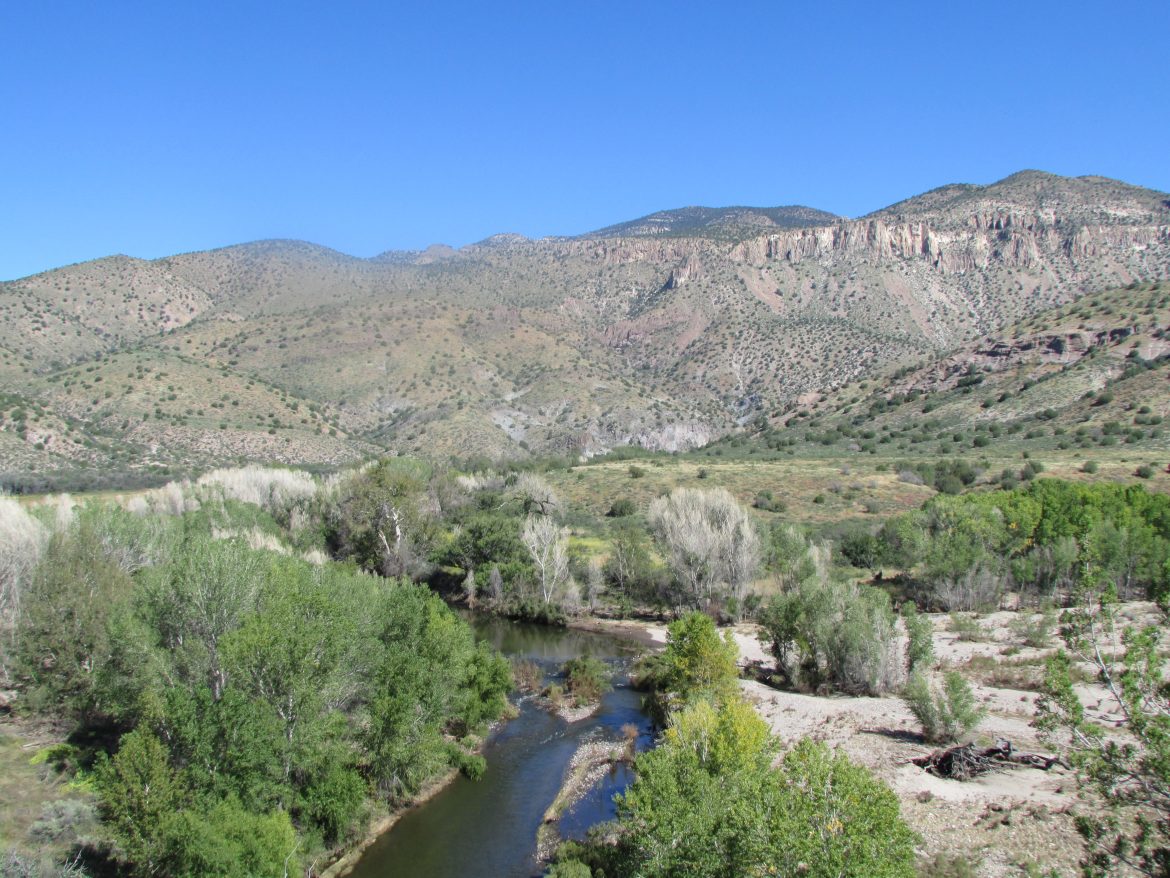 The proposed diversion would be built just upstream of this stretch of the Gila River.

By a tight vote Tuesday morning, the Senate Conservation Committee passed a water bill—one that represents the latest attempt to control spending on a controversial diversion on the Gila River.

Introduced by Sen. Howie Morales, D-Silver City, Senate Bill 72, would channel federal money earmarked for the diversion toward other water projects in southwestern New Mexico. It would appropriate $50 million toward fully implementing a regional water project in Grant County, other shovel-ready water projects in the area, a groundwater study of the Mimbres Basin aquifer and water planning for the City of Deming.

Morales told NM Political Report that he sees passage of the bill as a way to move tens of millions of dollars in federal money in a “responsible way.”

The New Mexico Interstate Stream Commission (ISC) voted in 2014 to build the diversion, ten years after Congress authorized the state to trade 14,000 acre feet of water with a downstream user in Arizona. Already, New Mexico has spent more than $13 million of its federal subsidy on studies, engineering plans, and attorneys fees, although the state and the New Mexico Central Arizona Project (CAP) Entity still lack a firm plan or location for the diversion.

In a packed room at the Roundhouse, many opponents of the project expressed support for the bill and called for the money to be spent instead on the regional water project for the mining districts of Hurley, Bayard and Santa Clara.

Domenici called the bill “illegal” and “vague” and warned it created a process that contradicts the federal statute that authorizes the federal money and the diversion.

Shannon, who said CAP Entity directors “don’t sit in offices” but know how to wield shovels and get work done, said she feels “very strongly in opposition to this egregious bill.”

On behalf of his agency, Longworth said the bill would “disrupt” the funding and process for moving forward with environmental studies on the diversion.

When asked by Sen. William Payne, R-Bernalillo, if New Mexico would lose its ability to take advantage of the 14,000 acre feet of water, neither Longworth nor State Engineer Tom Blaine answered the question directly. Both men said that the federal money could only be used to build a “New Mexico Unit” of the Central Arizona Project. And Blaine said “if there is no unit, there is no water.”

“The right to water does not go away,” he said.

“The project is a fantasy at this point,” Gaume said. “Thirteen million dollars have been spent over 14 years and the project remains very ill-defined. The maximum benefits proposed are minuscule, and the water is unaffordable.”

As he has for years, Gaume leveled criticism at his former agency.

“This project is not going to be built, regardless of what you do,” he told senators. “If you don’t vote for this bill or something like it, the ISC will waste another $13 million.”

Last year, Morales and Republican Sen. Sander Rue, Albuquerque, co-sponsored a bill that would have required the ISC to answer certain questions about the diversion—such as where it will be built, its cost, where additional funding will come from and how much water is actually available from the river—before it approved spending additional money. That bill died in the Senate Finance Committee. At the time, the committee’s chair, Sen. John Arthur Smith, D-Deming, asked the bill’s supporters and opponents, including the ISC and CAP Entity, to resolve the issues on their own. Those meetings never took place.

Morales wasn’t necessarily optimistic about this year’s bill heading to that same committee.

“I’m not trying to go after the CAP Entity,” Morales said. But he does want more transparency and accountability when it comes to spending by the entity and the ISC.

His bill came on the heels of another engineering contract for study of the diversion’s design: At its January meeting, the ISC approved the CAP Entity’s request to issue a quarter-million dollars in contracts, including a $150,000 contract to Occam Consulting Engineers, Inc. That company is owned by former State Engineer Scott Verhines, and among the company’s other “team members” is former ISC Director Estevan López.

“As the process continues, we see just what we suspected: more dollars expended and nothing to show for it,” Morales said. “There are projects in place right now that we can move forward with, that have their engineering studies done, and which have been shown to be feasible—rather than spending this money on further studies and legal action, let’s get that to funding to work for New Mexicans.”

The Gila River water rights issue dates back more than a half-century. In the late 1960s, when Arizona was seeking support for the Colorado River Basin Act, then-State Engineer Steve Reynolds negotiated 18,000 acre feet of water for New Mexico. The state didn’t receive that water outright, however. It needed to find a downstream water user in Arizona willing to exchange water. For decades, New Mexico couldn’t find a trading partner.

Then, in the early 20th century, Arizona again needed New Mexico’s support on a water bill in Congress—this time to settle water rights with the Gila River Indian Community. In particular, Arizona needed Sens. Pete Domenici and Jeff Bingaman. Depending upon which party controlled the U.S. Senate, the New Mexico Republican and Democrat traded places for years chairing the Senate Committee on Energy and Natural Resources.

In 2004, when Congress passed the Arizona Water Settlements Act, New Mexico finally got a trading partner. That bill authorized New Mexico to exchange up to 14,000 acre feet of water with a downstream user in Arizona, the Gila River Indian Community.

Congress also gave the state 10 years to decide how it would use tens of millions of dollars in federal money. New Mexico could pursue efficiency, conservation and restoration projects to meet water needs in Catron, Grant, Hidalgo and Luna counties—or receive additional funding and build a diversion on the Gila River.

In 2014 the ISC voted to build a diversion, and the following year it passed responsibility for planning and operating the diversion to a new, quasi-governmental organization, the New Mexico Central Arizona Project Entity or CAP Entity.

For New Mexico to receive its full federal subsidy for the diversion project, the U.S. Bureau of Reclamation must issue a decision on the project by the end of 2019. But the entity has yet to submit a plan that triggers the start of environmental studies, which are a requirement of the process.