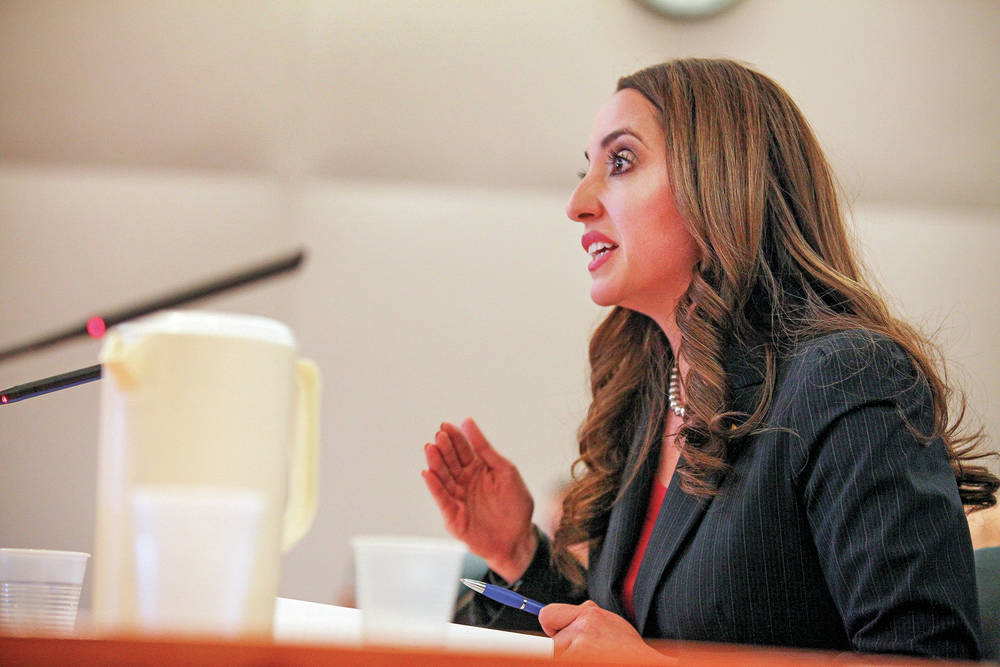 Rep. Sarah Maestas Barnes, R-Albuquerque, answers questions about House Bill 100, that would make intentional child abuse resulting in death a first-degree felony that carries a life prison sentence, regardless of a child's age, on Thursday February 1, 2018. The committee voted 5-0 to advance the bill.

State lawmakers did not know Jeremiah Valencia during his short, tormented life.

But 13-year-old Jeremiah’s death dominated debate at a lengthy legislative hearing Thursday. At issue was a bill to make intentional child abuse resulting in death a first-degree felony that carries a life prison sentence, regardless of a child’s age.

Under current state law on child abuse, life sentences can only be given to defendants who intentionally kill a child younger than 12. Someone who abuses and kills a child between 13 and 18 can receive a sentence of up to 18 years.

Rep. Sarah Maestas Barnes, R-Albuquerque, said the distinction is senseless and should be eliminated. At age 13, Jeremiah was no more able to defend himself against adult attackers than a younger child would have been, she said.

With the Santa Fe County boy’s death fresh on everyone’s mind, the House Consumer and Public Affairs Committee voted 5-0 to advance Maestas Barnes’ House Bill 100 without a recommendation. It goes next to the House Judiciary Committee.

“It just breaks my heart that these criminals could walk the streets again,” Maestas Barnes said.

But if the perpetrators are convicted in Jeremiah’s death under existing laws, they might still die in prison.

That is because they eventually could be charged with murder, kidnapping, battery and other crimes that would lead to a sentence so long they would never go free. That argument, though not raised Thursday, has been used against Maestas Barnes’ bill in past years.

Those skeptical of her proposal have pointed out that the three defendants in the infamous attack on 10-year-old Victoria Martens of Albuquerque are charged with murder and rape, crimes that could lock them away for decades.

Parents and grandparents of children who died violently testified for Maestas Barnes’ bill, saying punishment for those who kill older children in New Mexico does not fit the viciousness of the crime.

The ACLU, the Law Offices of the Public Defender and defense attorneys opposed the bill. They said one concern about a blanket change is that a juvenile who kills another child might be ensnared in a rigid law mandating a life sentence.

Maestas Barnes, herself an attorney, called their concerns a smokescreen and said a grand jury would not consider violence between two juveniles child abuse.

But her focus on punishment led the committee chairman, Rep. Eliseo Alcon, to question whether the Legislature, the Department of Public Safety and the Children, Youth and Families Department were doing their job correctly.

Alcon, D-Milan, said he read accounts of Jeremiah being injured so severely that he needed a cane or wheelchair to get around. Why, Alcon asked, did no one notice or care enough to seek help for Jeremiah when he was alive?

“How does it get to this point? Why are we allowing it to get this far,” Alcon said to Maestas Barnes and an expert witness, Monique Jacobson, Cabinet secretary of the Children, Youth and Families Department.

Jacobson replied that strides have been made in preventing child abuse. For instance, she said, her agency has increased the number of social workers checking on child welfare and established the #SAFE hotline to report child abuse or neglect.

“These are complex issues,” Jacobson said. “There isn’t a silver bullet.”

She added that part of improving the system is holding accountable those who kill children of any age.

Though the committee advanced Maestas Barnes’ bill, Democrats in the House might prefer a different measure by one of their colleagues, Rep. Antonio “Moe” Maestas of Albuquerque.

His proposal is House Bill 296 and it has been placed on the agenda by Gov. Susana Martinez.