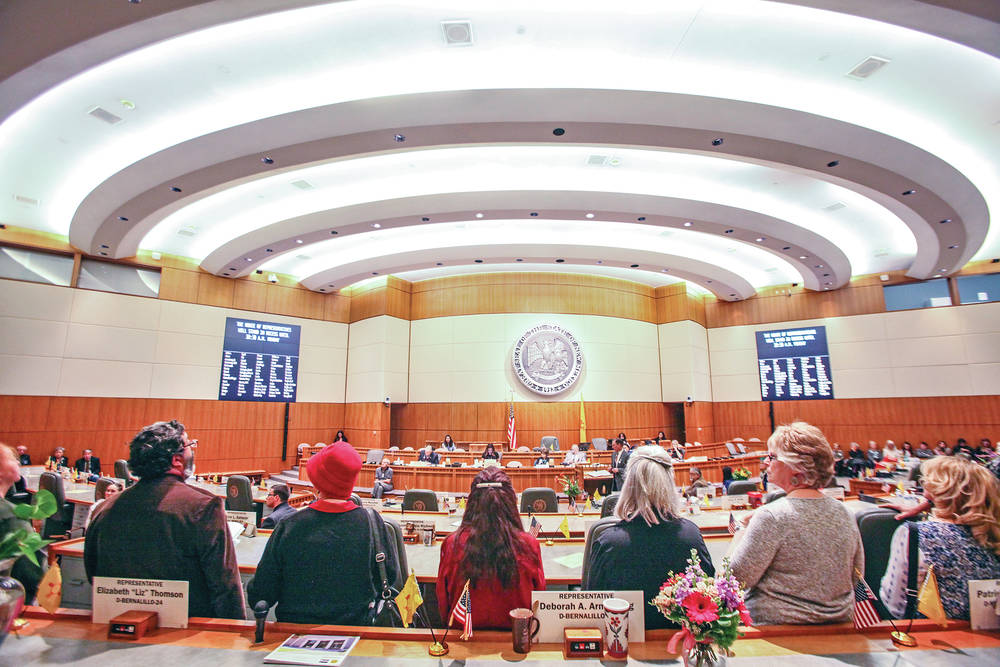 A line of people wait to voice their opinions on the controversial Parental Notification of Abortion Act on Saturday at the Capitol. The measure, House Bill 56, which would require abortion providers to notify the parents or legal guardian of a minor seeking an abortion, was rejected by a House committee along party lines.

Two hours of emotional testimony from New Mexicans on both sides of the abortion debate did not seem to change anyone’s mind at the Legislature on Saturday, as a House committee voted along party lines to block a bill that would have required abortion providers to notify parents before their child undergoes the procedure.

The Republican sponsors behind House Bill 56 said the measure was a simple step to ensure minors make informed decisions with their parents before getting an abortion.

But critics countered that the measure would hamper the rights of young women in making an intensely personal decision and delay care for patients.

The House Consumer and Public Affairs Committee tabled the bill on a 3-2 vote, with Democrats on the prevailing side.

The bill would have required abortion providers to contact a minor patient’s parent or guardian by a certified letter delivered via courier at least 48 hours before their child undergoes the procedure.

An exception would be allowed if the pregnancy was caused by rape or incest. In such instances, the abortion provider would have been required to report the case to the Children, Youth and Families Department.

The bill also would have made an exception for cases in which the procedure was necessary for the patient’s health.

A minor could go to court, too, to ask a judge to waive the notification requirement, though critics argued that process would have been burdensome and only delayed the patient’s care further.

Any abortion provider violating the act could have faced a fine of $5,000 and see their license to practice medicine suspended for at least one year.

Rep. Rick Little, R-Chaparral, said the bill was sensible considering that children must get permission for all manner of other activities, from taking medication at school to playing organized sports.

“Minors cannot go on school field trips without parental consent. There’s a reason for that,” he said, contending that children cannot be expected to make major medical decisions on their own.

And, in a subsequent stream of testimony, members of the public recounted their own experiences with unplanned pregnancies and abortions, pleading alternately with lawmakers to do something to rein in access to the procedure in New Mexico and to keep out of a woman’s intimate decision.

Critics contended that the bill would deprive patients of the right to confidentiality when seeking out an abortion and potentially dissuade them from seeking care sooner.

“Forcing a young man or a woman to go to a parent may be catastrophic,” Dr. Sandra Penn told the committee. “Young women have committed suicide or self-induced abortion rather than tell a parent. We physicians are required to seek out any issues, coercion and abuses and report them. Let us give the best care. The Legislature is not the right place to make individual medical decisions.”

The American Academy of Pediatrics has opposed legislation such as Little’s bill, contending that similar laws may only delay medical attention, leading to the need for more complex procedures.

Thirty-seven states require that abortion providers at least notify parents about a minor patient’s decision to have an abortion, according to the Guttmacher Institute, a nonprofit group that studies and advocates for reproductive rights. Of those states, 21 require parents’ permission, not just notification.

New Mexico does not have any of the major restrictions on abortion often found in other states, such as waiting periods, mandated parental notification or limitations on publicly funded abortions, the institute says.

Republican lawmakers have filed other bills proposing to restrict access to abortion, including a ban on abortions after 20 weeks of pregnancy, but the measures are unlikely to go far in the remaining 11 days of the legislative session.