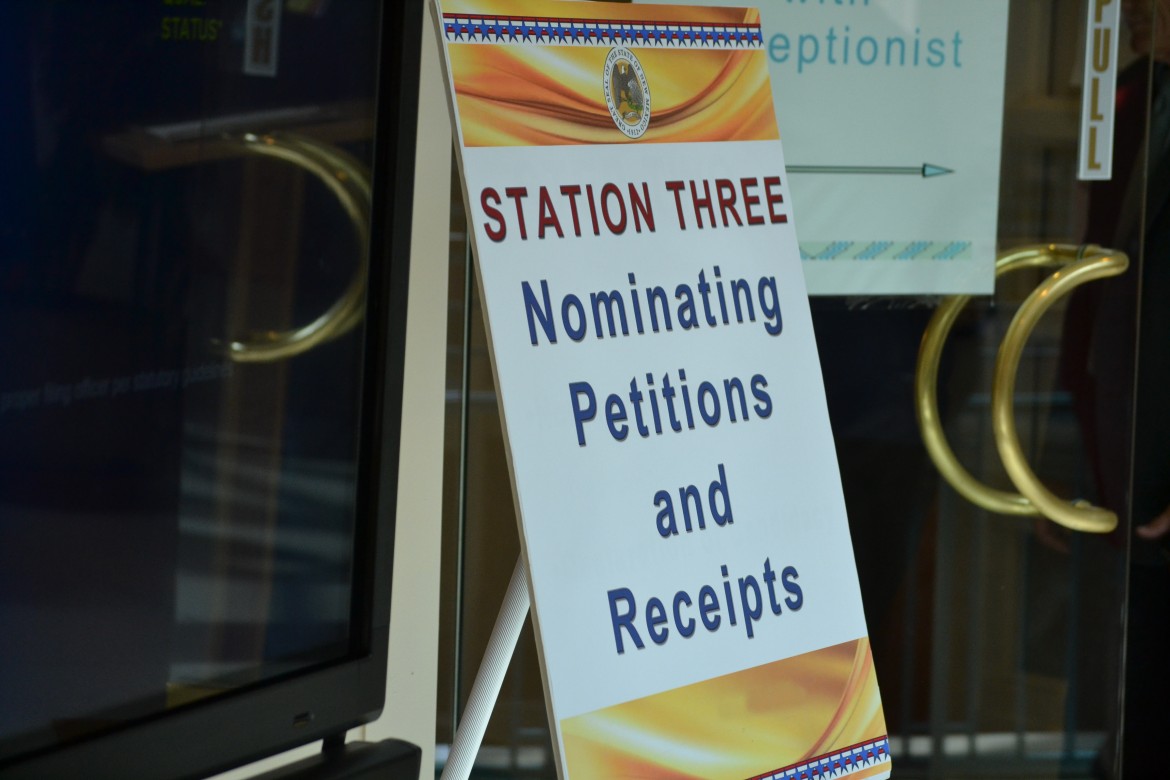 Photo from the Secretary of State's office on filing day, 2016.

Dozens of people aiming for state office filed through the elevator doors into the New Mexico Secretary of State’s office on Tuesday to navigate the three-stage process of declaring their candidacy.

The day offered  a rare early opportunity for candidates and their staff to interact with one another—which included a lot of smiles and polite handshakes, even across party lines.

The process was straightforward—there were three stations to verify and confirm paperwork and petition signatures—and took about 20 minutes for most candidates.

Here are my notes from the field:

I walk in right behind Antoinette Sedillo Lopez, who is running for the state’s 1st Congressional District, currently held by Democratic U.S. Rep. Michelle Lujan Grisham. Sedillo Lopez, visibly excited, arrives with her crew of family members and campaign staff.

Secretary of State employees tell me there was a rush of candidates between 8 and 9 a.m., but state statute doesn’t allow the process to start until 9. That was probably a disappointment to some candidates, including state Rep. Bill McCamley, D-Mesilla Park, who has been campaigning for State Auditor. McCamley, who took a break from the legislative session happening about 200 yards away, rushed in and out to return to the Roundhouse. He only has time to say hello before rushing back to caucus.

Some of the early folks include proxies for Republican U.S. Rep. Steve Pearce and Lujan Grisham, who both chose to run for Governor instead of reelection.

One notable early morning candidate is Johanna Cox, who recently announced she’s running for Secretary of State as a Republican. She is one of the few to go through the process without an entourage or campaign manager.

“It makes [the process] easier,” Cox tells me.

By mid-morning, the stream of candidates slows to one or two coming in at a time.

Unlike campaigning or most steps along the electoral process, filing day leads to a lot of inter-party mingling.

Former Republican National Committeeman Pat Rogers accompanies “a friend of his”—who turns out to be Republican Public Regulation Commissioner and State Land Commissioner hopeful Pat Lyons. (He had that job previously for two terms, from 2003-2010.)

The last stop of the process involves candidates and their staff waiting for petition signatures to be verified, which leads to more waiting and time to mingle.

Janice Arnold-Jones, though, wastes little time talking to her fellow Republicans. Arnold-Jones, who is unopposed in the CD 1 Republican primary politely says hello to Rogers and others nearby, but largely sticks to business with a smile.

As lunch time approaches, there is a reunion of sorts of Albuquerque mayoral candidates.

Michelle Garcia Holmes, Brian Colon and Wayne Johnson all arrive within a few hours of each other. There also seems to be a bit of a musical chairs vibe in the offices each of them are running for.

Garcia Holmes is a former detective with the Albuquerque Police Department, now running as a Republican candidate for Lt. Governor.

Brian Colón is a former Democratic Party of New Mexico Chair, former Lt. Governor candidate and has now filed to run for State Auditor. State Auditor is the position that launched the political career of New Mexico Attorney General Hector Balderas, who also shows up to file for reelection.

Things pick up again after lunch when State Treasurer Tim Eichenberg turns in his paperwork for reelection, while Jeff Apodaca files paperwork for his race for governor and Santa Fe Mayor Javier Gonzales enters the race for lieutenant governor.

During the quiet time, Democratic gubernatorial candidate Peter DeBenedittis shows up. The plucky, self-described political outsider tells me he is most proud of the work his volunteers did to gather more than 6,000 signatures. He says his campaign is completely “people-powered” and is relying less on money than his opponents.

The quiet afternoon is disturbed when six Libertarian Party candidates show up.

Among them are father and son, Aubrey and Blair Dunn. Aubrey Dunn is running for Senate and Blair Dunn for Attorney General. Aubrey is currently the State Land Commissioner and recently switched from the Republican Party to the Libertarian Party.

This is the first year that the Libertarian Party has major party status, making it easier to get on the ballot.