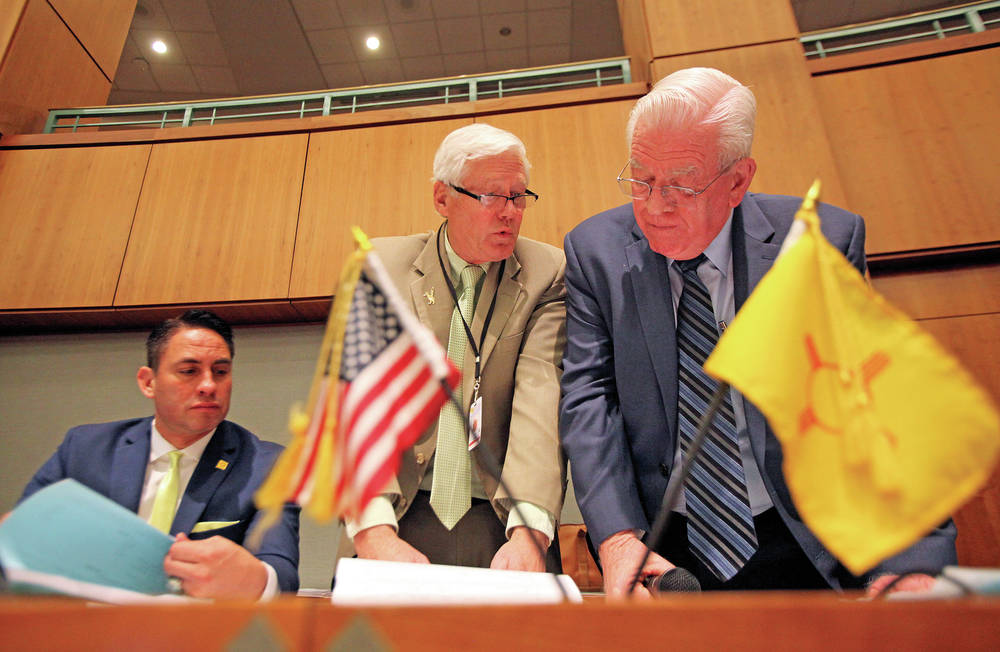 The Legislature’s two chambers are at odds over a proposed $6.3 billion state budget.

Unlike recent years when financial problems prompted rounds of cuts, partisan fights and depleted reserves, the disagreements that emerged Tuesday came down to comparatively minor questions about funding roads.

The Senate overwhelmingly approved a spending plan on Tuesday that provides bigger pay raises for state police than a version of the budget passed by the House of Representatives.

The Senate version of the budget, approved 40-2 by members of that chamber, also provides millions of dollars in additional funding for the district attorney in Albuquerque and returns some of the money cut from school districts last year.

But the Senate also scaled back the amount of money the House had approved for roads.

And the House, which approved its version of the budget late last month by a vote of 65-3, declined to go along with those changes on Tuesday night.

That sent the budget into negotiations between the two chambers as the Legislature prepares to adjourn at noon Thursday.

The bipartisan support for each chamber’s version of the budget signaled that the differences could be resolved without a bruising fight.

The Senate’s version of the budget is not too different from the House’s.

New Mexico’s tax revenues have rebounded as the oil industry has boomed in the Permian Basin. In addition, improvements in the state’s job market and slower than expected growth in Medicaid expenses have buoyed the budget, staving off further cutbacks.

The Senate plan would give back about $10 million that was taken from the reserves of school districts last year to shore up state finances. And there is as much as another $10 million in general funding for public schools.

Those maneuvers left less for roads, a stumbling block for a key House member.

Rep. Patty Lundstrom, a Democrat from Gallup who chairs the House Appropriations and Finance Committee, said the $34 million for state roads approved by the Senate would not go far.

“What we’re trying to do is to kickstart the economy. We want to get construction going,” she said.

That aside, there were points of agreement in the proposals.

Like the House version, the Senate measure provides a 2 percent raise to state employees as well as public school staff, a 2.5 percent raise to teachers, and bigger raises for social workers, prosecutors, public defenders and others.

The Senate version provides an 8.5 percent pay raise for state police, instead of the 6.5 percent approved by the House.

Rep. Larry Larrañaga, R-Albuquerque, said the House’s concern is not with the raises but with how they are structured.

The Senate budget also provides a bigger boost to the budget of the district attorney’s office in Albuquerque.

Gov. Susana Martinez had called the House budget “soft on crime.” And media in New Mexico’s biggest city had focused in particular on the budget for the district attorney, arguing that an outsize increase is needed amid rising crime rates.

That in turn rankled some lawmakers who point to higher crime rates in rural parts of the state, where prosecutors are seeing no such windfall in funding. It could also potentially turn into another sticking point as the House mulls the Senate’s proposal.

But the additional money was an overt effort at conciliation, though, as lawmakers sought to avoid another showdown with Martinez over what might turn out to be just a few million dollars.

Last year, Martinez gutted funding for higher education and forced a special session — exactly the sort of clash that many lawmakers are eager to avoid this year as the governor prepares to leave office and House members face re-election.

The Senate budget provides additional funding for pre-kindergarten programs, childcare and higher education. It also earmarks money to address the anticipated collapse of a brine well in Carlsbad. And it would provide $10 million to construct a new hangar at Spaceport America.

“New Mexico got a pretty fair budget,” said Sen. George Muñoz, a Democrat from Gallup and member of the Senate Finance Committee.

Still, the additional spending on public safety has not satisfied everyone.

Sen. Jacob Candelaria, D-Albuquerque, voted against the budget after raising concerns that it did not provide funding for hiring police officers in his city.

Sen. John Arthur Smith, a Democrat from Deming who chairs the Finance Committee, said that is the city’s responsibility, not the state’s.

But Candelaria told the Senate: “Albuquerque has not been fully taken care of.”

Sen. Bill Sharer, R-Farmington, was the only other member of the Senate to vote against the proposed budget.

The spending plan would leave reserves at around 10 percent, Smith said.

Still, pointing to New Mexico’s reliance on the volatile oil and gas industry, Smith acknowledged the state will not have saved up as much as it perhaps should.

Recurring spending in the General Appropriations Act by year, not including later cuts