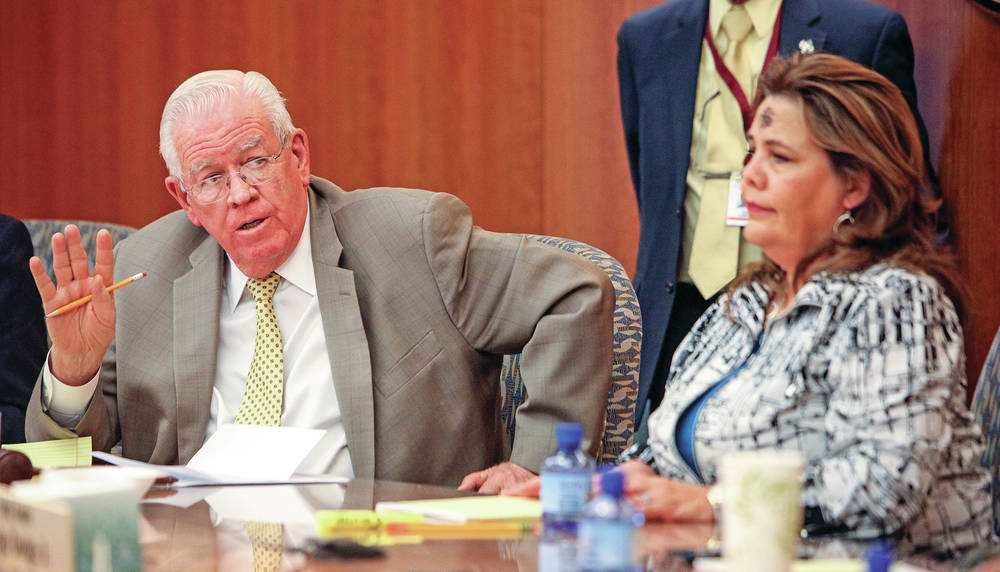 Sen. John Arthur Smith, D-Deming, speaks with top budget writers from the House and the Senate as lawmakers hammered out last-minute changes to state budget legislation at the Capitol on February 14, 2018.

A $6.3 billion spending plan is on its way to Gov. Susana Martinez after the Senate and House of Representatives brokered a compromise on slightly different budgets approved by both chambers.

The compromise won bipartisan support in the House and Senate, a marked departure from recent years when financial shortfalls led to spending cuts and intensely political clashes over state spending.

Meanwhile, a spokeswoman for Gov. Susana Martinez signaled that she would be receptive to the budget. That is different from last year, when she vetoed much of the annual spending plan, at one point threatened a government shutdown and ultimately forced a special session.

“The governor worked with legislative leaders and is generally pleased by the budget and how it prioritizes public safety, crime and economic development,” press secretary Emilee Cantrell said in an email.

She added that any tax increases “are dead on arrival,” and that the governor’s office will still have to review the budget closely. Cantrell said the governor is “skeptical of some of the wasteful pork projects included in this and other bills.”

The differences between the House and Senate versions of the budget proved relatively minor, with a political peace holding during the 30-day legislative session as the state’s financial outlook has brightened with higher oil prices.

In the budget, too, is additional funding for early childhood education and public schools.

And the budget, which would amount to about a 4 percent increase in spending over last year, would restore the state’s reserves to about 10 percent. Lawmakers almost depleted the savings in previous years to shore up New Mexico’s finances.

Still, it appeared crime and how to pay for fighting it might shatter the political peace.

After the House passed its version of the budget on a vote of 65-3 on Jan. 31, the governor’s office was quick to call it “soft on crime.”

So in its version of the budget, the Senate ratcheted up funding for the district attorney’s office in Albuquerque as well as pay raises for state police officers.

The Senate version also restored some of the funds cut from school districts last year.

The House declined Tuesday to accept those changes, disagreements apparently coming down to the mundane.

With the two chambers at odds, three members from the House and three from the Senate met to forge an agreement. As recently as a decade ago, these conference committee meetings were closed to the public. This time, each side publicly made its case over relatively small amounts of money.

The compromise brokered Wednesday did not touch the higher pay raises or bigger funding for the district attorney in Albuquerque.

“What we’re looking at here are some minor adjustments,” Rep. Patty Lundstrom, a Democrat from Gallup and chairwoman of the House Appropriations and Finance Committee, said during a meeting with senators. “There is not any big deal here. Rest areas and school district cash balances are what it boils down to.”

Compared to the version approved by the state Senate on Tuesday, the compromise budget would give back schools less of the money cut from districts last year. The Senate voted to return about $10 million of the roughly $41 million slashed from school districts’ reserves in 2017. The compromise provides half as much, or about one-eighth of the money taken.

The compromise version of the budget provides about $44 million for state roads and $4 million for rest areas.

In the final version of the budget, there is also about $1 million for improving broadband access and $1 million for an airplane hangar in Roswell — funding included in the House version but not the Senate’s.

The budget would take effect for the fiscal year starting in July.

Lundstrom had backed higher funding for roads, arguing it would provide an economic stimulus to the state.

Other lawmakers were adamant that the state must restore at least some of the funds cut from schools.

Sen. John Arthur Smith, a Democrat from Deming and chair of the Senate Finance Committee, said it sends “a very poor signal” not to return some of that money to school districts after using that money to balance previous budgets.

Even so, some Republicans in the House argued the $5 million was not enough.

Thirteen House members voted against the final version of the budget.