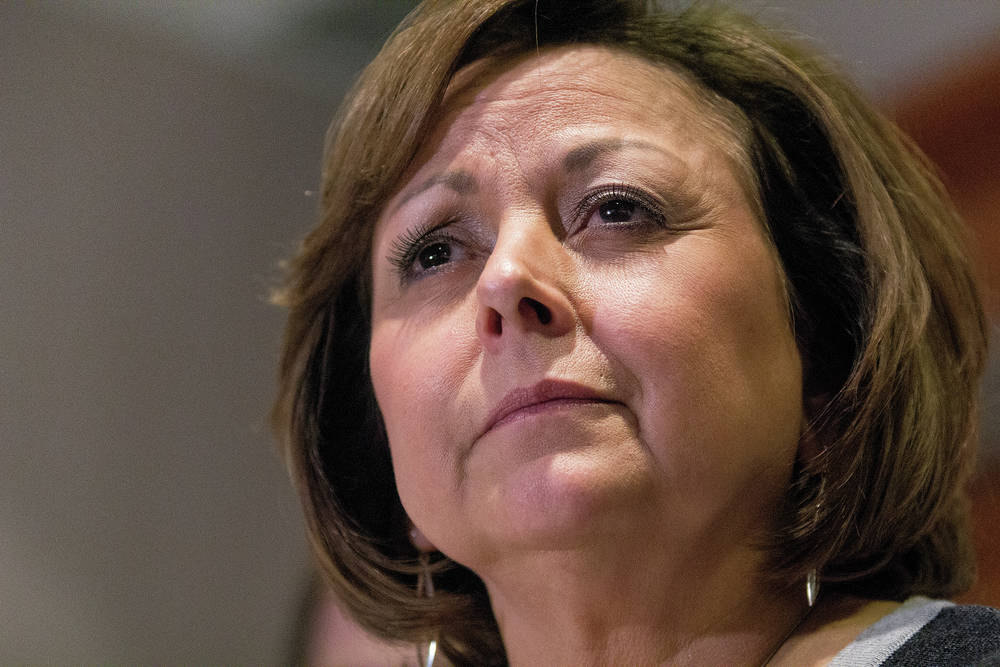 Gov. Susana Martinez listens to questions Thursday during a news conference after the conclusion of the 2018 legislative session at the Capitol.

There were no threats of a government shutdown this time.

Instead, a sort of political peace reigned as the 30-day legislative session ended Thursday with a $6.3 billion budget headed to the governor’s desk along with a bipartisan slate of crime legislation and pay raises for teachers and state police.

The bombast and sense of crisis that marked the 2017 session seemed to evaporate as Gov. Susana Martinez sought to strike a conciliatory tone on her way out of office.

But gone, too, were any major initiatives or innovative policy changes.

Rep. Stephanie Garcia Richard, D-Los Alamos, embraces Rep. Nick Salazar, D-Ohkay Owingeh, as the 2018 legislative session comes to an end Thursday. This was Salazar’s 46th and final year in the House of Representatives.

With Martinez nearing the end of her term and the state’s financial outlook brightening but not totally sunny, the session ended anticlimactically, with lawmakers eager to avoid another partisan showdown as they also wait to see what direction the state’s economy — and the governor’s yet-to-be-elected successor — might take.

More than any new laws or programs, perhaps the biggest thing legislators gave New Mexicans during this session was a sense that their state government is no longer lurching from one financial crisis to another.

“This is the first time in a few years where we are arguing where to add to the budget instead of where to cut,” said Rep. Larry Larrañaga, a Republican from Albuquerque and ranking member of the House Appropriations and Finance Committee. “Every indicator we see economically is positive. But it’s not at a point where people say we’re flush.”

Unlike last year, when the state was still grappling with a financial tumble in the wake of a collapse in oil prices, the state has seen its budget situation improve. Oil prices are up and the number of New Mexicans with jobs has just about returned to prerecession levels.

A bipartisan budget for the fiscal year that will begin in July includes more funding for public schools and early childhood education as well as 2 percent raises for state and school employees. Teachers will get a raise of 2.5 percent and state police will get 8.5 percent.

The district attorney in crime-riddlen Albuquerque would see increased funding, too.

And the budget would leave the state’s reserves around 10 percent — a bounce back after reserves fell to nearly nothing in recent years and New Mexico lost its credit rating.

Speaker of the House Brian Egolf, D-Santa Fe, answers questions Thursday during a news conference after the conclusion of the 2018 legislative session at the Capitol.

In all, general fund spending would increase about 4 percent, or by $259 million. Public school funding would grow by about 2.3 percent.

Though Martinez vetoed a big chunk of last year’s budget and forced a special session, the governor told reporters she does not plan to call lawmakers back to Santa Fe.

The governor said she supports a bipartisan public safety bill pieced together by Republicans and Democrats as something of a compromise around one of the most pressing and heated issues of the session — New Mexico’s high crime rates.

House Bill 19 would, among other things, toughen penalties for violent felons caught with a firearm, expand mental health services for jail inmates, provide bonuses for senior law enforcement officers and ensure that many minor nonviolent offenses are no longer punishable by jail time.

Martinez vowed to veto tax increases, too, and along with Republican legislators, lamented that lawmakers did not go even further on crime.

On Thursday, the governor made a last-minute push for what is known as Baby Brianna’s Law, which would allow a life sentence for child abuse resulting in death when the victim is over the age of 11 — not just under 12, as the state’s current statutes say.

The bill died without a hearing in a Senate committee. So, too, did a proposal to extend the period of time during which prosecutors could bring charges in second-degree murder cases and a proposal to reinstate the death penalty.

In turn, Democrats bemoaned that the governor, a former prosecutor, had not offered any particularly new approaches to crime.

“The governor’s been urging us to pass penalty bills for eight years,” Senate Majority Leader Peter Wirth, D-Santa Fe, told reporters, describing it as “eight years with a one-sided approach to criminal justice reform.” He added that legislators approved some crime measures, but not others.

Baby Brianna’s Law was not the only one of the governor’s priorities to flounder. Democrats shot down a proposal to hold back more third-grade students who are not reading at grade level on standardized tests. And they blocked what supporters call “right to work” legislation. Proposals to scale back bail reform failed, too.

Martinez had not shirked from these fights in the past.

During a special session in 2016, for example, she pushed for a vote on reinstating the death penalty.

But this time around, Republican lawmakers were unwilling to risk blowing up the work of the last month over legislation they knew had little, if any, chance of passing the Democrat-controlled Legislature and instead seemed more intent on passing what they could.

“There are always those who will say, ‘You’re giving them too many wins; you’re working too closely with them,’ ” said House Minority Leader Nate Gentry, a Republican from Albuquerque. “But at least for 30 days we try to set aside the sound bites and the bad votes and the gotcha moments in order to govern.”

For Republicans, there were plenty of reasons to take a conciliatory approach. Martinez, her approval ratings sliding, is not on the ballot. But Republican House members are.

Democrats, meanwhile, took something of a holding pattern — aware their biggest priorities probably wouldn’t get past the Republican governor.

That meant plenty of people besides Martinez were left disappointed, too.

The Catholic Church and advocates for early childhood education have pushed for years, for example, to pass a constitutional amendment that would take an additional 1 percent of the state’s multibillion-dollar Land Grant Permanent Fund for education.

Though Democrats got the bill out of the House, budget hawks in their own party quashed it again in the Senate, despite what had turned into nightly candlelight vigils outside the Capitol.

There was no substantive gun control legislation. No restrictions on abortion passed, either. Perhaps the biggest open government and ethics legislation did not get far. Comprehensive tax reform will have to wait for yet another year.

The focus on building the state’s financial reserves meant there were not many major new initiatives or programs.

By Thursday morning, as the legislative session neared its end, the House of Representatives actually ran out of things to do. Lawmakers, who are often cranking away on bills and procedural measures until the very last minute, were milling around the House chambers before the last bang of the gavel.

Members were quick to say the convivial atmosphere was a reaction to what they did not want this election-season session to become — another frustrating partisan mess.

“We all hear what the people are listening to at the national level,” Larrañaga said as he strolled the House chamber. “It has been such a toxic atmosphere. We’ve got to change the way we do business.”

On the governor’s desk

Gov. Martinez has 20 days to sign the budget, House Bill 2, and a pile of other legislation. That includes: