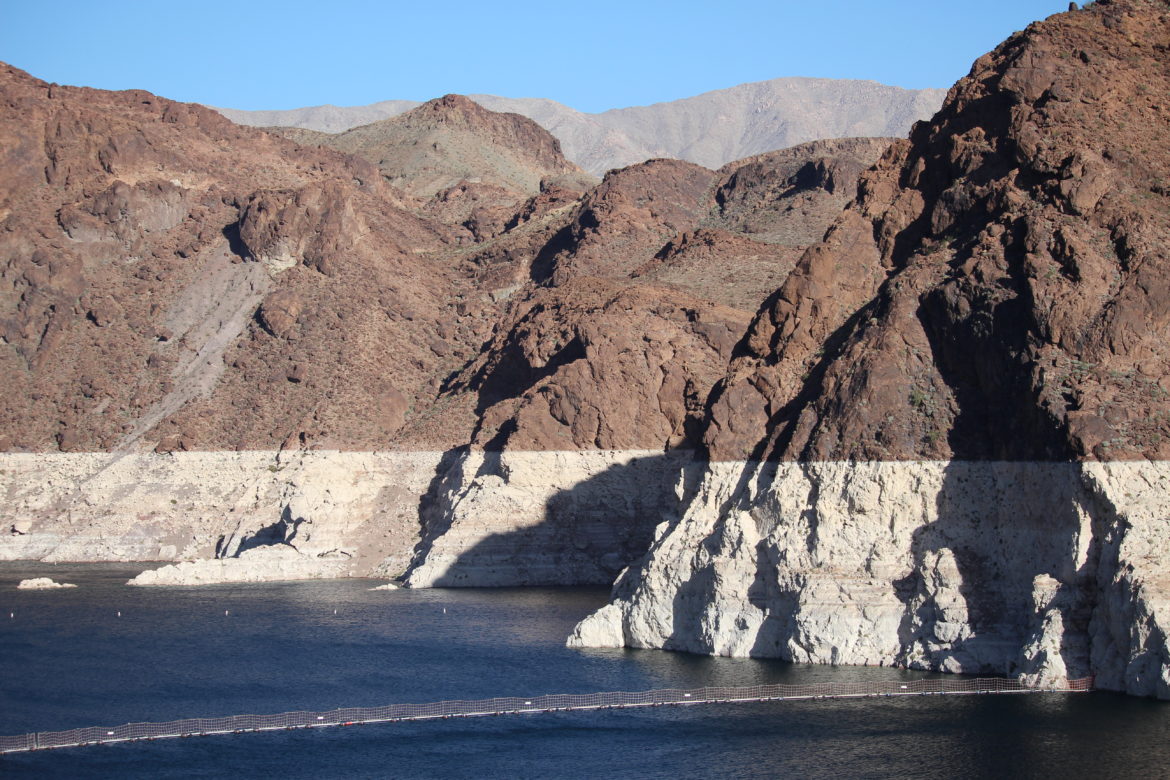 Lake Mead on the Nevada-Arizona border

Over the next week, New Mexico Political Report will be reporting from…not New Mexico. Instead, we’ll be taking a closer look at the Colorado River.

The Colorado delivers water to more than 36 million people in seven states and two countries. Its waters carved the Grand Canyon and, far more recently, allowed the growth of Sunbelt cities like Phoenix and Tucson. (No, neither is near the Colorado. Rather, Arizona convinced Congress to fund the Central Arizona Project in the late 1960s, which built more than 330 miles of pipelines and aqueducts.) Maybe more than the casinos, the Colorado is the engine behind Las Vegas. And farmers in the Imperial Valley of California use the river’s water (and a fair bit of groundwater, too) to grow over a billion tons of hay each year, about two-thirds of the vegetables eaten in the U.S. during the winter and most of the nation’s winter lettuce.

New Mexico gets its slice of the Colorado, too.

The San Juan River in northwestern New Mexico is a tributary to the Colorado, as is the Gila River. Thanks to the U.S. Bureau of Reclamation’s San Juan-Chama Project, water from tributaries to the San Juan is diverted through 26 miles of tunnels into the Chama River, which itself pours into the Rio Grande. Cities like Albuquerque and Santa Fe rely on that water, as do irrigators in the Middle Rio Grande Valley and the Pojoaque Valley.

All told, grasping water issues in much of New Mexico demands understanding the complexities of the Colorado as well.

Coming up, we’ll share stories on a range of topics related to the Colorado River, including conflicts between the City of Las Vegas and rural water users, the river’s dwindling reservoir levels, tribal water issues in Arizona, restoration projects and plans, agricultural and irrigation issues and relations between the U.S. and Mexico.

Looking at current issues on the Colorado River—especially as states and water users grapple with allocations and more pressure is put upon the river and its reservoirs—offers lessons for New Mexico.

Water issues are notoriously complex (and sometimes, frustrating), and it’s worth thinking about how much has changed in the 96 years since the Colorado River Compact was signed.

Colorado River at the Hoover Dam

In a new book, “The Source: How Rivers Made America and America Remade Its Rivers,” Martin Doyle spends nearly a full chapter on the Colorado River. He writes that when the seven states were trying to figure out how to divvy up the river in the early 20th century, the Colorado River Commission members “sequestered” themselves at a remote ranch in New Mexico.

Then-Secretary of Commerce Herbert Hoover, who later became the 31st President of the United States, was head of the commission and he chose Bishop’s Lodge “because it was several hours away from Santa Fe by rough roads, thus limiting the potential for observers and interlopers.” (That four-mile drive takes fewer than ten minutes today. But that’s not the only thing that’s changed in the past century.)

At the ranch, formal talks were held with only the delegate and advisors (an engineering adviser and a legal adviser) from each state; this approach minimized outside or lobbying during the actual talks and allowed the commissioners to negotiate concessions without immediately infuriating their state interests. These conditions, combined with Hoover’s constant cajoling and needling and prodding, resulted in a compact that hinged on a great compromise.

One of those was dividing the river’s users into upper and lower basin states—then letting states within the two subgroups battle with one another. The upper basin states include Colorado, Wyoming, Utah and New Mexico and the lower basin states, California, Arizona and Nevada.

The second compromise, according to Martin, was allowing the states to figure out how much water there was to divide.

The U.S. Geological Survey had been measuring flows over the past few decades, and in 1922, the annual flow at Lee’s Ferry, the spot chosen to divide the upper from the lower Colorado River, was estimated at 16.5 million acre feet.

But even as demands for the river’s water have grown over the past century, its annual flows have declined.

In a study published last year, Bradley Udall and Jonathan Overpeck wrote that between 2000 and 2014, annual Colorado River flows averaged 19 percent below the 1906-1999 average. They continued:

Recently published estimates of Colorado River flow sensitivity to temperature combined with a large number of recent climate model-based temperature projections indicate that continued business-as-usual warming will drive temperature-induced declines in river flow, conservatively −20% by midcentury and −35% by end-century, with support for losses exceeding −30% at midcentury and −55% at end-century.

Speaking at the University of New Mexico last year, Overpeck noted that it’s not as if the warming halts after that:

Warming may also affect San Juan-Chama Project water, which cities and irrigators have come to rely upon as a supplement to the natural flows of the Rio Grande. A federal study in 2013  showed that, as warming continues, the project will experience shortages in the coming years. At the same time that native flows on the Rio Grande are projected to decline by about one-third, flows in the tributaries that supply the San Juan-Chama Project—the Rio Blanco, the Little Navajo River and the Navajo River—are expected to decrease by about a quarter.

Hopefully not all the stories this week from the Colorado River will be dire. We’ll also be looking for examples of good management, cooperation among stakeholders—and who knows? Maybe even a little bit of hope.