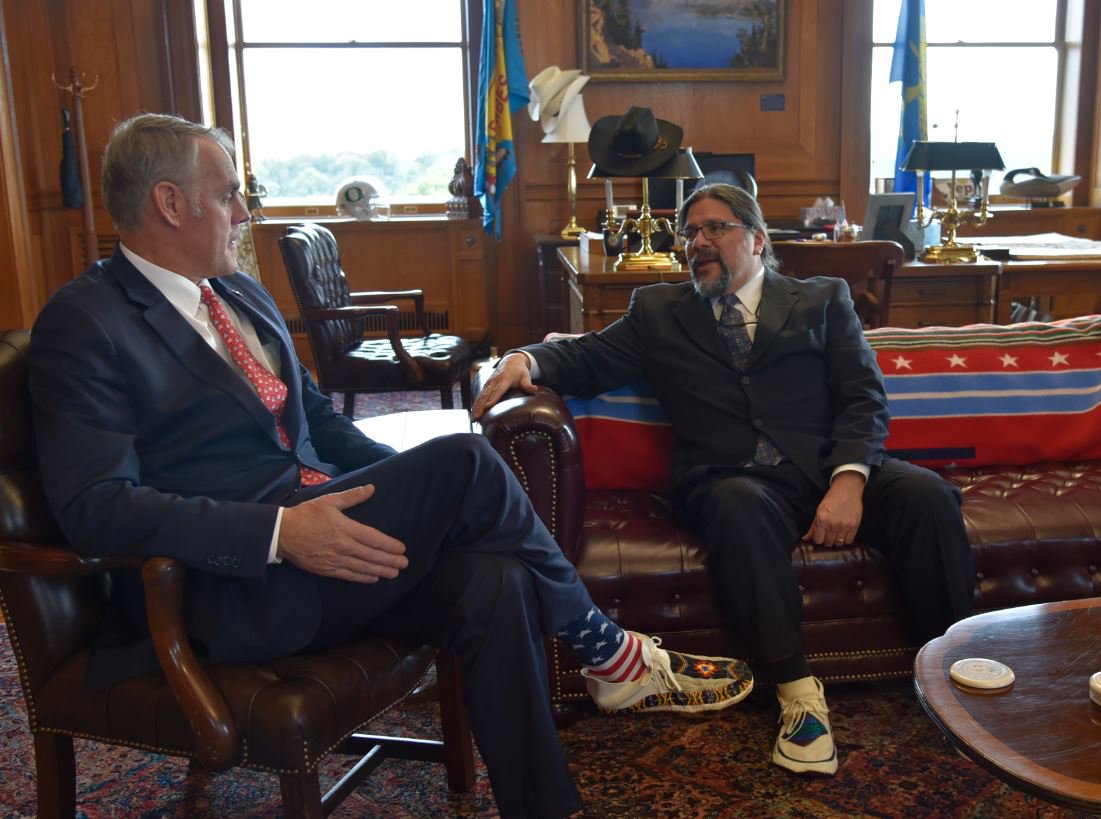 Sue Parton first began working for the Bureau of Indian Affairs in 1976, as a teacher at the Albuquerque Indian School, one of the few remaining BIA boarding schools at that time. Parton, a member of the Kiowa Tribe of Oklahoma, had been around the agency most of her life; her father was a lifelong employee. But she gained a new perspective in 2008, as she got more involved with the Federation of Indian Service Employees, the union that represents employees of the four Interior Department agencies that serve Native Americans.

“One of the things that shocked me was the intimidation factor,” says Parton, now president of the union. “A lot of people had complaints that they were being treated unfairly and harassed, but were intimidated — didn’t want to speak up or didn’t want their name out there for fear of retaliation. That has been in existence for a long time.”

Federal agencies have been coming under increased scrutiny for their failure to address harassment. Earlier this month, the chief of the Forest Service resigned after allegations of sexual misconduct surfaced. At the Interior Department, much of Secretary Ryan Zinke and Congress’ attention has gone to harassment claims within the National Park Service. The department, which commissioned workplace surveys for each of its agencies, released the Park Service results in October 2017, along with an immediate action plan for remediation. Since then, the other agencies’ survey results have become public, showing that harassment is not just a Park Service issue.

In fact, according to the surveys, employees with the Bureau of Indian Affairs, an agency staffed mostly by American Indians, experience more harassment than other Interior agencies. The problem is acute across the BIA, an underfunded agency whose employees are scattered across 12 different regional offices in Indian Country. The bureau has a long, complicated history with Indigenous people; it was first established under the War Department in 1824, with the explicit purpose of assimilating Native Americans into non-Native culture. The survey’s findings raise big questions: How can the agency fulfill its stated mission — empowering tribal governments — when it is so rife with harassment? Recent investigations show that little meaningful action has been taken to prevent such harassment, or address it when it is reported.

Jana Walker, a senior attorney at the Indian Law Resource Center, has a different perspective. “Within the BIA, there are high rates of harassment — particularly racial and sexual harassment — and poor investigation of those crimes and policy violations,” Walker, a citizen of the Cherokee Nation and Delaware Tribe of Indians, wrote in an email. “This appears to be another reflection of our federal government’s values and priorities.”

The survey offers a window into a troubled agency: Overall, 40 percent of BIA employees surveyed said they had been harassed in the previous 12 months, and rates of racial and sexual harassment and assault were generally higher than those at other Interior agencies. And given that respondents often underreport their experiences, these numbers add up to a conservative estimate. The majority of those surveyed say they did not report their harassment.

As is often the case in federal agencies, the majority of victims of sexual harassment and assault were young women. The survey also shows tensions between non-Natives and Native Americans. Twenty percent of employees, mostly white or Hispanic, felt they had been racially harassed in the last 12 months. The only agency with higher racial harassment was the Office of the Special Trustee for American Indians, which also had the highest sexual harassment of all Interior Department agencies.

“There’s a lot of good people working for the BIA,” Parton says. “But in order for us to do those jobs, we need to have a healthy working environment to carry forth our mission that our agency has for Native people.”

BIA employees are vulnerable partly because of the agency’s structure. Workplaces are isolated and decentralized, and gender disparities in positions of authority favor men. The survey found that most harassers were older males, either a coworker or a supervisor, as is true across other agencies. In an agency culture where most people do not report harassment, respondents said they were often discouraged from doing so. Those who did report generally spoke to their supervisor. If they pressed the issue, they said, many experienced retaliation from their coworkers, as well as the harasser.

Parton says it can be difficult to change the behavior of people in rural, isolated places, especially when authority figures have held their positions for a long time. That, coupled with inadequate funding from Congress for Native programs and staffing, makes for low morale. And in communities with few employment opportunities, fear of retaliation runs high. “It makes an environment that’s easy for employees to be harassed, because there is so much toxicity in their workplace — they’re in fear of speaking out,” Parton says.

There is also a lack of understanding of what constitutes harassment. Sixty percent of respondents said they did not report incidents, often because they didn’t think they were serious enough to report. That issue extends to tribal governments and communities. Brandi Liberty, who works as a consultant with tribal governments to address sexual harassment, says many of her clients aren’t clear on what activities they should report, or how to do so. “People, especially in Indian Country, aren’t familiar with what (the definition of) harassment is,” says Liberty, a member of the Iowa Tribe of Kansas and Nebraska. “From working in Indian Country and being a Native individual, we don’t report a lot. There’s a lot that we put up with.”

A May 2017 investigation by Interior’s Office of the Inspector General exemplifies the problem. According to a summary of the report, which was not publicly released, BIA managers and human resource officers made little or no effort to address or substantiate claims that a BIA employee was harassing employees and members of the Colorado River Indian Tribes. Though two people were concerned enough for their safety to file injunctions against the man, the BIA continued to employ him, despite the sexually explicit notes, texts and Facebook messages he sent to women for two years. This episode, the OIG concluded, “damaged the BIA’s reputation, undermined the trust of local tribal members, and negatively affected (the employee’s) coworkers.” Once the allegations were substantiated, the man resigned. “There already is a big lack of trust in tribal communities with federal agencies because of the historic relationships we’ve had with these agencies,” says Liberty.

The Bureau of Indian Affairs has submitted a formal action plan to address the survey findings, though Interior spokeswoman Heather Swift says there is no confirmed release date. BIA did not provide additional comment on the action plan. Walker, of the Indian Law Resource Center, said she hopes the survey will be used to put resources into protecting Native and non-Native women, inside the agency and out: “Perhaps changing the internal environment within these federal agencies will also lead to some positive outcomes on their external policy decisions on ending violence against Indigenous women as well.”

High Country News is conducting an ongoing investigation into instances of harassment, discrimination and sexual assault in Indian affairs agencies, and how agency officials handle these complaints.

If you are a current or former employee of a federal Indian affairs agency who has experienced harassment, please consider contacting us.

This form is secure, but please consider using a personal email address instead of your government email.