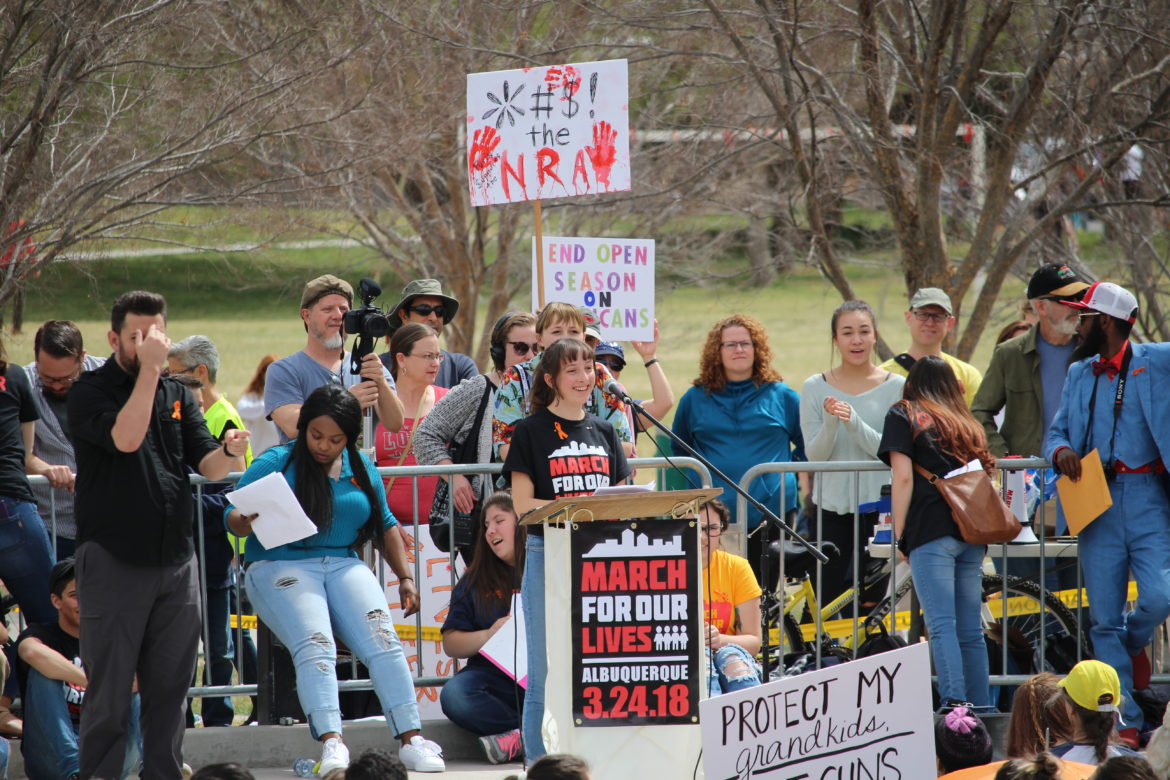 A student-organized march and rally in Albuquerque attracted thousands of people to Old Town this morning as part of the national March for Our Lives which protested gun violence and school shootings. The march began at the Old Town Plaza and ended a few blocks away at Tiguex Park.

Along the edges of the crowd at Tiguex Park, Democratic gubernatorial and congressional candidates shook hands and spoke with attendees. But most of the calls to action, poems and inspirational words came from middle school, high school and college students.

Lillian Hunt, 17, and Emma Buck-Anderson, 19, who helped organize the rally, both said they just want adults to hear their concerns when it comes to issues like school safety.

Buck-Anderson said her school, the University of New Mexico, isn’t taking gun violence and campus safety seriously enough. She recalled a recent incident when the university reported a man with a gun on campus.

“There was no lockdown, nothing,” Buck Anderson said. “Nothing happened, except for a little text that said, ‘Just to let you know there’s a man on campus with a gun.’”

All of the students NM Political Report spoke with said they don’t advocate for eliminating guns, but want more gun control measures.

UNM freshman Blair Dixon, whose voice was all but gone after leading chants and marchers along the almost mile-long route, said he received positive reactions from rally-goers, but still heard from the cynics.

“People are still telling us, ‘You are just kids, you don’t know anything,’” Dixon said

“It shows people of all ages can be leaders, but especially high schoolers,” he said.

Keller added that city efforts to enact gun control measures are hampered by state law and that he is “waiting for a partner in the Roundhouse.”

At least two of those potential partners also attended the rally.

U.S. Rep. Michelle Lujan Grisham, who is running for governor, marched and also released her eight-point plan to combat gun violence. Her plan included requiring background checks for all gun sales and transfers, not just those from licensed gun dealer, and enacting laws to allow emergency court orders to surrender guns when a person shows signs of harming themselves or others.

Jeff Apodaca, who is also running for the Democratic gubernatorial nomination, took part with his two sons. Apodaca said while he is a gun owner, he wants to see more restrictions on certain semi-automatic rifles. He also praised the students who organized the rally, while simultaneously making a verbal jab at Lujan Grisham, saying she and other members of Congress have failed to make reforms.

“[The students are] standing up because our political leaders won’t take action,” Apodaca said.

Vera Berger, a junior at Bosque School, said the fears of teens and children are justified. She demanded action, saying that students have the right to have peace of mind.

“When our legislators have failed us, when they have politicized our safety, we are taking things into our own hands,” she said, with a warning to lawmakers: “Get with the program, or we’re voting you out.”

Michael Sanchez, a teacher at La Cueva High School, recalled watching the news of Columbine as a teen.

“I remember feeling the call to action,” he said to the crowd. “I remember sending letters to senators and representatives. I remember the American feeling of pride, that we will stop this. This will never happen again.”

Nineteen years later, however, hundreds of more students have been killed and a false narrative has arisen around gun rights and the Second Amendment, he said.

“As a teacher, I have hope every single day,” he said. “Young people are amazing. They are demanding a change, they are saying, once more ‘Never again!’” he said. “Let’s join them.”

Other rallies took place throughout the state, including in Santa Fe, Las Cruces and Rio Rancho.

Student organizers for March for Our Lives Albuquerque address a crowd of about 8,000 people.