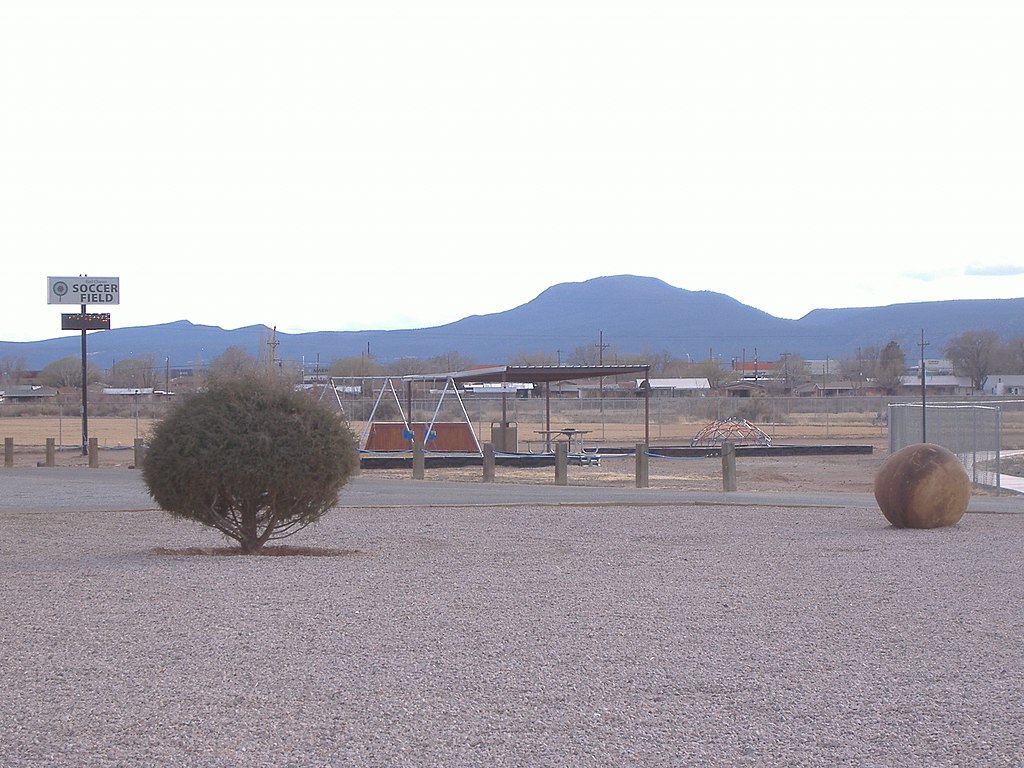 This story is part of the State of Change project, produced in partnership with the Solutions Journalism Network.

Dilapidated motels line the entrance to Grants, New Mexico, signs of the boom that came and went in this town of 9,000 people.

Reclamation work continues at the mines that once earned Grants the nickname “uranium capital of the world,” but federal figures show the mining industry employs a fraction of what it once did in the historic U.S. Route 66 town. “The uranium mines were good to us,” said Sarah Pena, 71, a lifelong Grants resident. “They brought the economy up, and there are a lot of people who are still here, who stayed.”

Today, finding consistent work is a challenge for Pena and scores of others in Cibola County, where the unemployment rate is higher than the state average and precious little besides a few private prisons powers the local economy. To Pena, an 80-mile drive to an office job in Albuquerque started to sound like the best option.

This story appeared at High Country News and is reprinted with permission.

A fledgling state program is trying to change that, starting with Grants.

Pena is one of about two dozen workers participating in SoloWorks, a kind of “micro” economic development program that trains and connects New Mexico workers via the internet to remote out-of-state jobs, one person at a time. The vision is to create a new economic base for rural communities, using an internet connection to bring new money into towns thirsty for a broader tax base. In its first year, the program showed mixed results: a pilot program in Grants trained about 25 workers and placed 10 of them into online jobs. Of those, two are still working. The program is faring better so far in 2018, after tweaking the program to focus more on retention: Of 21 people trained, 12 found remote jobs so far. Two have started work, and the rest are awaiting more on-the-job training.

SoloWorks faces major hurdles amid its planned expansion to several other New Mexico communities. Chief among them are internet connectivity and a battle for funding that could threaten the program’s future. Many workers don’t have the broadband connection their employers require. And while the program’s champions hope this can create a new generation of remote entrepreneurs and knowledge-based workers, until now, the jobs created have been mostly low-wage customer service and transcription roles. That has made it a hard sell to the New Mexico legislature, which funded the program at a fraction of what the group asked for earlier this year.

Though advocates’ promises come with caveats, a program like SoloWorks could be another route to reversing population declines in rural communities across the West, where once-lucrative work in mines and other natural resource industries is harder to come by than a generation ago.

“If it works, it’d be one of the few programs that actually work in rural places, or places where there are people but not jobs,” said Mark Lautman, the SoloWorks program creator and founder of the non-profit Community Economics Lab in Albuquerque. “If this works, it’s going to stabilize a lot of rural communities that would otherwise disappear.”

Pena, for one, is optimistic about her prospects. “I like to work,” Pena said. “But I also want to stay here. Because my family’s here.”

The uranium boom hit the town fast. Population in Grants quadrupled between 1950 and 1960, and peaked around 1980 at 11,500 people. “It was all family and friends here,” Pena said. “The mines opened up, and all these new people came in.”

In the 1980s, the uranium market busted. By 1990, one in four people had left Grants. The town’s population has crept upward since then, but not to its boom-time size. The economic need, plus an enthusiastic local economic development director, made Grants a logical first stop for SoloWorks to test its ideas. “We wanted to choose a place where no one would accuse us of cherry picking,” Lautman said. “If we test this, let’s go to a place where no one would think we could do it. So, we went to Grants.”

On a recent Tuesday morning in March, Pena and a fellow SoloWorks participant, a former restaurant worker named Samuel Jack, finished job applications at desktop computers in the SoloWorks center, tucked in a former exercise studio at New Mexico State University. Motivational signs lined the walls around them. “I am self-driven and ambitious,” the signs said. “Not everyone is cut out to work remotely.”

SoloWorks is billed as a job creation program. It targets several kinds of workers: entrepreneurs with no central workplace, individuals who could work for remote employers and the chronically hard-to-employ. The program recruits local residents, trains them in online skills like how to tailor a resume to an online job, and helps them apply for jobs with one of about 70 employers affiliated with SoloWorks. The program offers a co-working space and internet connection at a fraction of what it would cost workers on their own.

The Holy Grail is what Lautman calls economic base jobs — jobs that are paid for by someone out of state. “It’s really hard to recruit companies to small towns, especially if they’re shrinking,” Lautman said. It’s also tough to find work nearby in a shrinking rural economy. “If you think of everyone who walks into a local business development office, the local office has to find them something within about 20 minutes of where they live.”

Not so with remote work, which research suggests is a growing sector of the U.S. economy. In 2016, 43 percent of employed Americans spent at least some time working remotely, up from 39 percent in 2012, according to Gallup polling data. A 2017 survey of independent workers found that a third of the U.S. workforce spent at least some portion of last year freelancing. If a program like SoloWorks can create 50 jobs in a rural community, that’s like recruiting a medium-sized company.

“How do you make yourself attractive to people who work alone?” Lautman said. And, how to do it at a scale that actually makes a difference?

Rich Pearson, a senior vice president of marketing for a freelancing website called Upwork, said while there’s increasing demand for remote workers, there are also barriers to being an independent worker. “It can be relatively lonely work,” Pearson said. “The confidence needed to succeed requires a community, requires specific skills for marketing yourself.”

Indeed, most of the workers who dropped out of jobs they found through SoloWorks did so either because of a wage cliff, as they started earning too much and lost state or federal assistance, Lautman said, or because they realized they didn’t want to do customer service work. In the past, SoloWorks had no other line of work to offer.

Pearson also said aggregating freelancers for call center jobs is not a new idea. But that’s only part of SoloWorks’ model. Where SoloWorks breaks the economic development mold is in how it’s funded: The program only gets state money if it creates jobs.

How does it work?

“Unless you make the funding of the operation based on post-performance placements, it’s too hard to keep staff motivated,” Lautman said. “You need to go the extra mile to get each one of these candidates to the goal line, because that’s the only way you get paid.”

So far, the SoloWorks program has been funded by a mix of local, state and federal funding, about $600,000 in all. The SoloWorks center in Grants receives $3,500 per job after the worker receives their first paycheck. If the program doesn’t hit 30 new jobs by the end of June, the rest of the available funding reverts back to the state.

Over the next few years, other communities hope to adopt the model. Las Vegas launched a similar SoloWorks program in fall 2017, and the New Mexico state Legislature approved funding for programs in Raton and Mesilla in early 2018. Lautman’s hope is that employers would one day pay for such a service.

But the same internet access that makes remote working possible also presents one of the program’s biggest hurdles, said Eileen Chavez Yarborough, director of the Grants economic development foundation. Without the connection at the SoloWorks center, these jobs wouldn’t be viable, as many participants lack access to reliable internet.

And even the program’s advocates acknowledge SoloWorks won’t be sustainable until they prove they can retain these new jobs over time, fixing the program’s low retention rate – an issue raised in a critical report to the state legislature early this year.

Will Yarborough, 23, is one of the handful of SoloWorks graduates from 2017 still working. He’s the son of Eileen Chavez Yarborough, the local economic development director, and works in medical equipment customer support and sales for a California-based call center from inside a large storage closet at the SoloWorks center. It’s quiet, he said, and he has the internet connection his home office does not. He’s working on a computer science associates degree at New Mexico State University and hopes to one day work in remote IT support.

By the end of the day on a recent Tuesday, Pena had finished her resume and practiced starting and stopping audio recordings while transcribing using a new foot pedal, under the eye of the program manager.

Meanwhile Pena’s colleague, Samuel Jack, was ecstatic. Just hours after submitting his application, so carefully vetted by both him and the site manager, he received an email back from the company.

He had landed an interview.

Leah Todd is a freelance reporter living in Taos, New Mexico, and the Mountain States coordinator for the Solutions Journalism Network. She has covered education for The Seattle Times and Casper Star-Tribune.