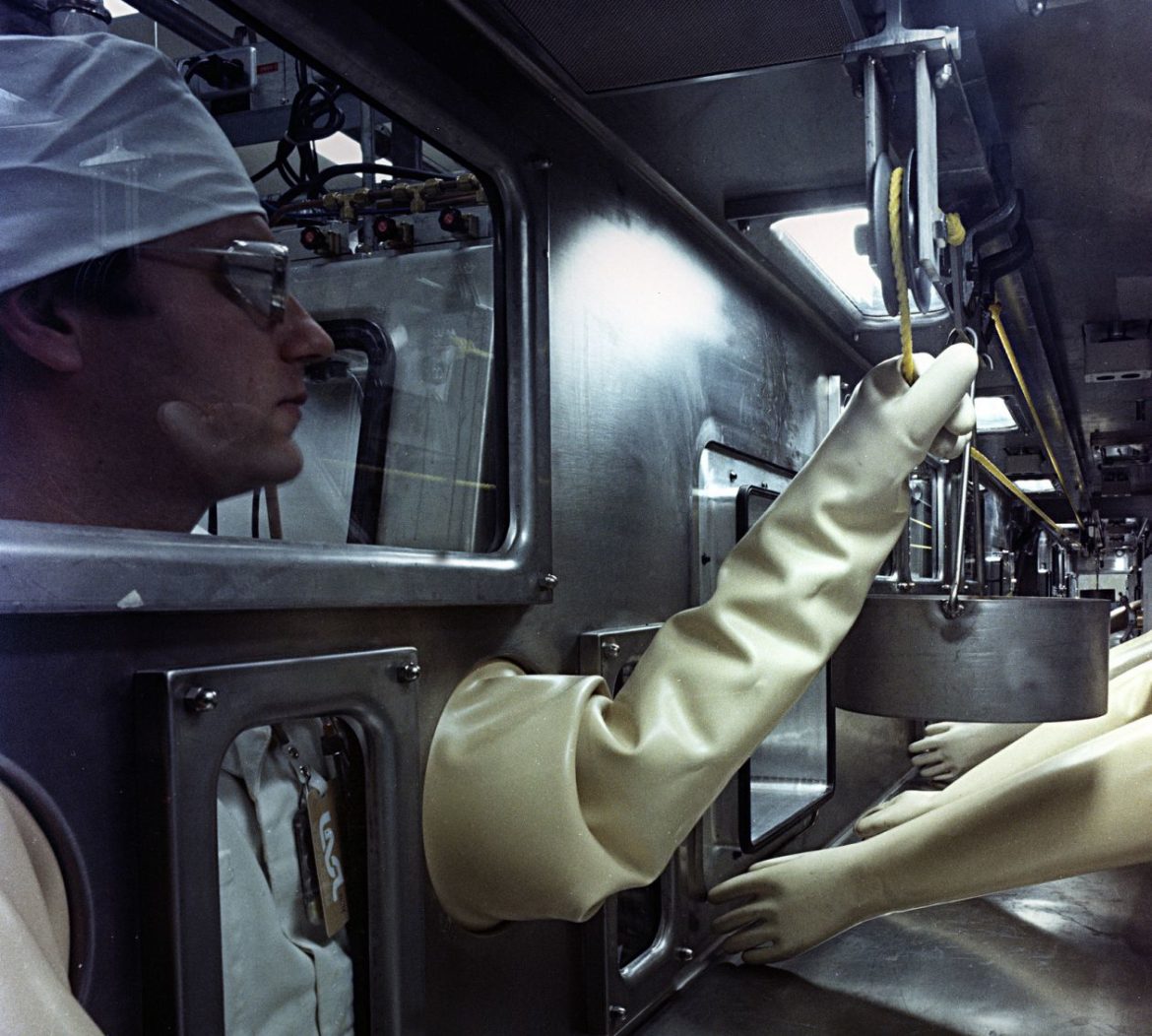 A view inside a conveyer alley where contained handling takes place. The gloveboxes are designed for preparing uranium and plutonium carbide compounds.

The Department of Energy is scheduled to decide within days where plutonium parts for the next generation of nuclear weapons are to be made, but recent internal government reports indicate serious and persistent safety issues plague both of the two candidate sites.

An announcement by the Trump administration about the location is expected by May 11, in preparation for the ramped-up production of nuclear warheads called for by the Defense Department’s recent review of America’s nuclear weapons policy.

This story originally appeared at the Center for Public Integrity.

Some experts are worried about the safety records of either choice: Los Alamos National Laboratory in New Mexico, where plutonium parts have historically been assembled, and the Savannah River Site in South Carolina, where other nuclear materials for America’s bombs have been made since in the 1950s.

Recent internal government reports obtained by the Center for Public Integrity have warned that workers at these plants have been handling nuclear materials sloppily, or have failed to monitor safety issues aggressively.

Personnel at Savannah River, for example, came dangerously close to a lethal nuclear accident in January 2015, when the stirring mechanism for a tank that held plutonium solution failed. Flecks of plutonium sank to the bottom of the tank, close enough for their neutrons to interact in a way that threatened to kick off a nuclear chain reaction – known as a criticality – that could have killed everyone in the room and spread radioactivity.

Since then, the site’s nuclear materials operations have been conducted under special oversight by the National Nuclear Security Administration (NNSA), an Energy Department component that produces warheads for the military. A group of senior Energy Department engineers and physicists concluded in a report in March, however, that while the unusual arrangement has brought some improvements, it hasn’t fixed key problems.

They said after an inspection visit from Jan. 8 through 18 that some top managers at the site were still alarmingly inattentive to safety, and were not adequately heeding the advice of their safety experts.

At Los Alamos, plutonium handling errors forced at least three work stoppages in March alone, including one halting all work associated with plutonium pits, after many similar stoppages in recent years, according to reports by the Defense Nuclear Facilities Safety Board, an independent federal oversight agency in Washington.

Although the Energy Department said the site is making progress, plutonium handlers at the lab confused the terms “staging” and “storage” twice in recent weeks, leading to plutonium being placed in areas and containers where it was prohibited and unsafe, the independent safety board reports stated.

The continued mistakes at Los Alamos follow a three-year period of stasis in the U.S. plutonium production program forced by the lab’s inability to meet safety standards for plutonium operations. Los Alamos’ plutonium facility shelved all the nation’s high-hazard plutonium work, including the production of nuclear weapons cores or “pits,” in the summer of 2013, and has recently resumed most but not all of the work.

The prolonged shutdown at Los Alamos — the birthplace of the nuclear bomb — provoked NNSA’s principal assistant deputy administrator for defense, Philip Calbos, to remark during a panel discussion at National Defense University in February that nuclear rivals are noticing America’s missteps.

“I’m sure they’re watching that. It’s not lost on anyone that there are nations out there that produce more pits than we do, including the North Koreans,” Calbos said. “That’s one of the reasons why we need to get moving in terms of our capability.”

In testimony before Congress in March, Gen. John E. Hyten, commander of U.S. Strategic Command, expressed concern that uncertainties surrounding plutonium pit production — including the choice of sites — could jeopardize a production ramp-up he said is needed by 2030.

The administration’s Nuclear Posture Review, a major policy document released in February, said that at least 80 pits annually should be produced by then. But in the last quarter century, the U.S. has produced a total of less than 30.

“If we’re going to be a nuclear nation, we have to have plutonium pit production,” Hyten said. “And so I’m concerned that we’ve now pushed that, just like everything else — everything will deliver just in time. Any time we have something that delivers just in time, I get very nervous.”

In an email, Los Alamos spokesman Matt Nerzig depicted the continuing safety problems as useful discoveries. “These process deviations are not slowing down our pit operations in any meaningful way and are serving to help us to further refine our processes and procedures,” Nerzig said.

Overall, Nerzig added, “we have greatly reduced our radiological risks.”

A spokeswoman for the contractor running the Savannah River site said it is “dedicated to maintaining the highest possible safety and security standards.” An Energy Department spokeswoman said the site’s safety program was overall “found to be healthy and functioning well,” even if it needed improvements in “supporting programs such as training and qualification and hazard assessment.”

NNSA spokeswoman Lindsey Geisler did not directly address the safety issues raised in the reports, but said in an email that “NNSA is committed to revitalizing the Nation’s plutonium pit production capabilities to meet stockpile requirements.”

At stake in the forthcoming site decision: An anticipated 800 jobs and billions of dollars in construction funds that will be needed to create or modernize factories for accelerated plutonium pit production. NNSA Administrator Lisa Gordon-Hagerty, a former health physicist at the bomb-designing Lawrence Livermore National Laboratory, is tasked with making the final decision in concert with a senior Defense Department official, after reviewing the engineering strengths of both Los Alamos and Savannah River.

The May 11 deadline to complete the analysis of alternatives was imposed through an amendment to the current defense spending bill from New Mexico’s two senators, Democrats Tom Udall and Martin Heinrich, who have been outspoken about their desire to keep plutonium work at Los Alamos.

If the NNSA hasn’t made a decision and the chairman of the Nuclear Weapons Council — a panel of senior Energy and Defense Department officials who help implement nuclear weapons policy — hasn’t accepted it by May 11, plutonium operations will remain at Los Alamos and Congress will move ahead with an estimated $3.7 billion in construction projects to accommodate the work there.

Plutonium pits are the shiny metallic, softball-size orbs that hold the most potent destructive force man has ever harnessed in a weapon. During the Cold War, the Rocky Flats production site in Colorado made as many as 2,000 a year. Decades of poor disposal of nuclear wastes and other dangerous environmental practices culminated in a dramatic FBI raid in 1989 that led to the site’s closure in 1992.

Nuclear criticality safety, the craft of avoiding a self-starting, potentially lethal, nuclear chain reaction merely from positioning too much plutonium too closely together, is an ever-present concern during such production.

While the latest internal review at Los Alamos — by a group of criticality safety specialists within the Energy Department — said its management “appears to be on the right track,” it also said that the safety program remains in “a very fragile state.” There are many indications, it said, that the program’s current leader “is overwhelmed with responsibilities.”

When the laboratory’s senior managers and its rank-and-file workers were asked during the inspection about how engaged the lab’s leaders were in safety issues, they provided conflicting answers. “Many senior managers who were interviewed indicated that they were very engaged in [Nuclear Criticality Safety],” the report said. “However, during the interviews with the operations or NCS staff, it was apparent that they didn’t have the same opinion.”

“Years of operating in a prior culture are not easily changed,” the inspection report warned, “in fact they are easily reverted to.”

A similar safety review of Savannah River was ordered as part of a DOE enforcement action provoked by close calls at the site. Issued on March 27, the review revealed that regular reports from Savannah River’s in-house experts on a criticality safety committee “appear to simply be filed,” without the panel’s recommendations consistently reaching the plant’s senior leaders, running afoul of a DOE requirement.

Linton Brooks, a former NNSA chief from 2002 to 2007 who serves as a consultant to several nuclear weapon sites, noted the many challenges faced by the Energy Department when he questioned during a recent public appearance whether the 80-pit-per-year target is realistic.

“Sometimes hard things turn out not to be possible,” he said during a nuclear weapons contractor conference on Feb. 22 in Arlington, Virginia. “There are enough things that can go wrong, and the recovery time for problems here is … between long and very long.”

Brooks recommended that the government undertake a new study of how to reuse some of the 14,000 plutonium pits that technicians have removed from retired nuclear weapons and stored at the Pantex Plant near Amarillo, Texas. Their reuse, he said, could be a fallback option if meeting the new pit production goal proves to be impossible.