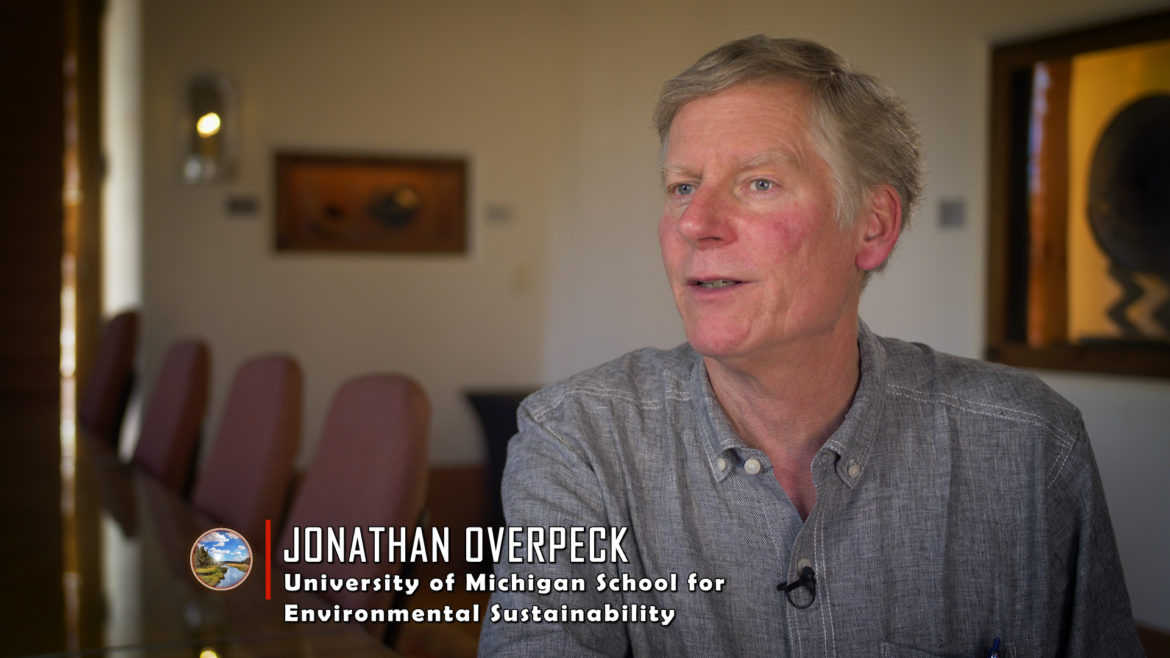 The signs of rising temperatures are obvious across New Mexico right now, from the mountains to the river valleys, and from rangelands to suburban backyards.

“Climate change for the Southwest is all about water,” said Jonathan Overpeck, who has spent decades studying climate change and its impacts in the southwestern United States. Warming affects the amount of water flowing in streams, and the amount of water available to nourish forests, agricultural fields and orchards. There’s also the physics of the matter: A warmer atmosphere holds more moisture, demanding more from land surfaces. Plants need more water, too. “Any way you look at it,” Overpeck said, “water that normally would flow in the river or be in the soil ends up instead in the atmosphere.”

Related story: A dry Rio Grande in springtime isn’t normal. But it will be.

Past southwestern droughts were notable for declines in precipitation. But today’s droughts are different, he explained.  Even in wet years, which will still occur as the climate changes, warmer conditions dry out the landscapes.

“With atmospheric warming, we’re getting what we’re calling ‘hot droughts’ or ‘hotter droughts,’” he said. “That means that they’re more and more influenced by these warm temperatures, and the warm temperatures tend to make the droughts more severe because they pull the moisture out of plants, they pull the moisture out of rivers and out of soil—and that moisture ends up in the atmosphere instead of where we normally like to have it.”

From 1952 until 1956, below-normal rainfall caused “critical water deficiencies in much of the southern half of the Nation,” according  to a 1965 U.S. Department of the Interior report. The 1950s drought had widespread impacts on New Mexico’s communities and economy. Today’s drought conditions, which Overpeck explains have been moving around the Southwest for 19 years, are exacerbated by warmer temperatures. The global temperature is 1.8 degrees Fahrenheit higher than it was in 1880, and the Southwest is warming at an even faster rate.

“What we’re seeing now in the drought that’s going on is that it’s more due to temperature increase and less due to precipitation deficit,” he said. And “hot drought” is what we should prepare to face in the future, too.

Last year, Overpeck and Bradley Udall—cousin of U.S. Sen. Tom Udall—published a study showing that flows on the Colorado River averaged 19 percent below the 1906-1999 average between 2000 and 2014. One-third of those losses, they showed, were due to higher temperatures, rather than changes in precipitation. They also wrote that if warming continues, the Colorado River will see 20 to 35 percent decreases in flows by 2050 and 30 to 55 percent decreases by 2100.

The San Juan River, which flows through northwestern New Mexico, is a tributary of the Colorado River. Cities including Santa Fe and Albuquerque also rely on water piped from tributaries of the San Juan River through a series of tunnels and diversions and into the Chama River, which empties into the Rio Grande near Española.

People should also be worried about the Rio Grande, Overpeck said: “Its problems are pretty much the same as the Colorado River.”

The Rio Grande is currently dry south of Socorro, N.M.

Losing water supplies due to warming is undoubtedly bad news.

“We know that humans are causing the warming, and we know it’s the burning of fossil fuels and the emissions of carbon dioxide that are the real culprit, so that’s really important because it gives us a chance to stop it if we wish,” he said. “That’s the kind of debate we need to have in society: do we really want to risk losing half the flows in our rivers, or more? And if we don’t, the good news is that we know how to slow down the losses just by slowing down our emissions of carbon dioxide.”

Overpeck likes to use a medical metaphor to explain the “good news.”

If you know you’re in bad shape, he asked, would you rather see a doctor who doesn’t know what’s wrong but sends you home with painkillers—or one who says, “You have cancer, that cancer is treatable, here’s what we have to do to stop the cancer and you can live a normal life”?

“That’s the way it is with climate change in the Southwest,” he said: “We’re going to lose water if we allow climate change to continue, but we know exactly why it’s happening and what we can do to make it stop happening.”