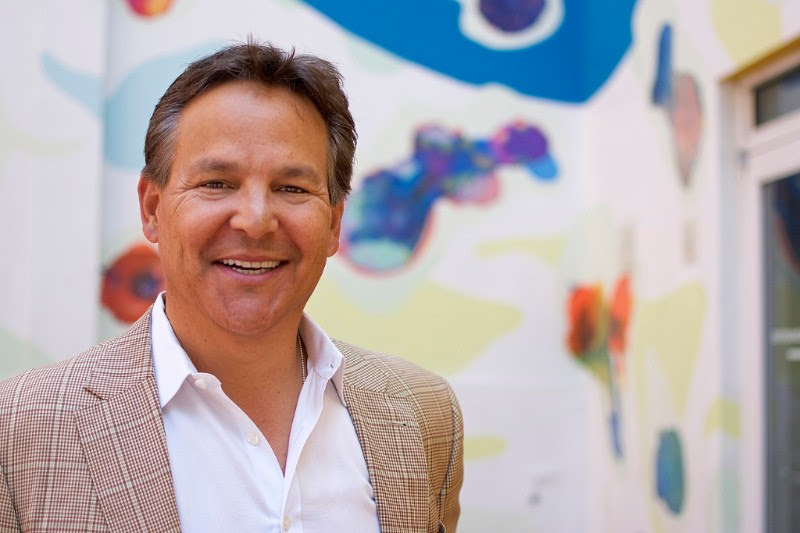 New Mexico In Depth is speaking with the candidates for New Mexico governor on the issues of early childhood, child wellbeing and education in New Mexico. Jeff Apodaca of Albuquerque is a former media executive and is one of three candidates seeking the Democratic nomination.  This Q&A has been edited for length and clarity.

Jeff Apodaca: Here’s our game plan. Over 60 percent of New Mexican kids have no early childhood education, so we’re proposing that we fund universal preschool — both private and public. We don’t want to put 700 private preschools out of business. I don’t want the state starting a preschool program. I think there are plenty of models out there; I just want to make sure we have funding for it. We also know that we have to get to families, so we have early family intervention. We want to make sure that we’re reaching families from birth to 20.

There’s already programs out there. You look at an organization like PB&J, and it’s a great organization. What’s their problem? They reach 7,000 kids when they should be reaching 70,000 kids. So our proposal is, let’s move $225 million from the top of the (Public Education Department) that don’t work or that we don’t need back down into the community.

SU: One thing I’d like to tease out here, though, is that you’re talking about small community programs. How do you get from 7,000 to 70,000? That’s like a school system.

JA: I’m just giving an example. If you go into every community, there is an organization or some program that is already doing that, they’re just not getting funded enough. Do we have all the details worked out right now? No. Do I want to start another government program and expand our public school system? I don’t think that’s the answer. I think the answer is working with the communities, working with nonprofits and organizations that know the community better than anybody else — both in the rural communities and cities like Alburquerque. How can we fund programs, nonprofit, government and, yes, even the private sector? How can we bring them all together to make sure that every child has early family intervention and early childhood education? Then we can fund 3- to 4-year-old programs around the state, and preschool for all.

SU: How does that work for a small community like Wagon Mound?

JA: We have to work with programs that we know work, and with community leaders. Start those programs with nonprofit and state funding, and launch them in little communities like Raton, and Wagon Mound and Mora. There’s always a local library or community center or school that we can use. I don’t think the state needs to come up with a full-blown program. I think that’s one of our biggest problems in the Education Department: we’re trying to educate our kids from the top down. I happen to believe our government should give them funding and opportunities, but let’s allow our local communities to educate our kids.

JA: I think you’re misunderstanding me. What I’ve said is I’d invest 5 percent of our $23 billion — the Land Grant fund is $17 billion — back into New Mexico. Now, I’ve never said I was going to use those monies for early childhood education. We’re going to invest that into economic development and into businesses and communities. That’s what I’ve been talking about — making a return on our investments.

SU: I’d love to stop you there so I can understand this. You would invest them, not draw down the fund?

JA: Exactly. It’s my opponents that are using the verbiage “draw down, raid, take out.” What I’ve said is we’re going to invest that money back into New Mexico. That $23 billion is being invested in California and Oklahoma. They literally buy Oklahoma state bonds with it at 1.8 percent. They’re investing in Wall Street and agriculture overseas. By state Constitution, we have to invest those funds, and there’s rules about how you invest. Every return we make in those investments goes back into the funds. I think my opponents don’t understand how the funds can be invested, and I think that’s why they’re thinking we have to make constitutional change.

However, I would absolutely sign a bill if they put it on my desk to take an extra half a percent or  a percent out of the Land Grant to fund early childhood education. But I’m not gonna sit around as governor and wait four years while everybody battles John Arthur Smith over whether to take any money out of that fund.

I believe we have found over $225 million within PED that we can move back into our communities. I will earmark $165 million of that into these early childhood programs. Then I believe the nonprofit world wants to come and work with us, and invest with us. I believe there’s enough money there that we can do it.

SU: So where exactly are all these millions of dollars being wasted at PED? If you talk to the teachers and school districts, they all say they don’t have enough money. I can’t imagine they’re wasting that much money at central office in Santa Fe.

JA: I can tell you right now that out of a $3.2 billion budget, we found almost $225 million, or 8 percent of PED’s budget, that doesn’t get into the classroom. So I agree with you 100 percent that when you talk to teachers, you talk to principals, when you talk to the community, money’s not getting there.

SU: Can you list some of the things you feel are being wasted in administration?

JA: I see things like the PARCC test, Pearson. We look at consulting fees. The last two years they clawed back $30 million out of PED that didn’t get used. Why was that? We think there’s enough money, we just think it’s being directed in the wrong direction. If you look back 40 years, we used to spend 6 percent more of our education budget in the classroom than we do today. I have twin boys that are 10, and I’m living what I see. We don’t pay our teachers enough money, we don’t give enough authority to our principals and superintendents.

Everybody today is saying there’s no money (to fund education). We’ve got to overtax. We’ve got to cut programs. At the same time our (permanent) funds have grown almost $2 billion in the last year. We have to start investing in opportunities. And by creating more jobs, we create more tax revenue for our state.

I’m basically a private sector media executive that has put private-public partnerships together. We invest everything outside of our state. We literally spend $240 million a year — between our cities, our counties and our state — trying to bring outside companies to come here to have a grand slam. We need to hit a bunch of singles, we don’t need to hit a grand slam. And that’s basically investing in New Mexico industries and New Mexico businesses.

SU: I think that’s admirable. We should be investing in our own state. But how do you put in the safeguards so that you don’t create self-dealing. We have a big history of that in New Mexico.

SU: The Trump administration is looking at cutting the SNAP program. They’re looking at cutting back on Medicaid. How would you deal with something like that as governor, when those programs are used very heavily by many families here in New Mexico?

JA: Twenty-five percent of our families live in poverty, 52 percent of our families live on some type of government assistance. As governor, I will fight and protect our federal budgets and our matching budgets as much as I can. That’s up to our U.S. senators and our Congress people. By tapping two Congress people (to run for governor), literally leaving their seat and their seniority, it’s actually hurting the state of New Mexico and hurting programs just like that. But again, here we are, talking about doomsday, when there’s no doomsday yet, and we have time. We have to grow revenues in our state. That means job creation. The only person talking about creating 225,000 new jobs is me. Now, they’re gonna say we’ve got to invest in the economy. OK. How?

I did a Turnaround Tuesday (last) week, where we talked about it. You start investing into agriculture, 20,000-30,000 new jobs. You start investing into technology — and I’m talking about technologies that are created here today, that leave our state every day: cyber security, aerospace, nuclear, photonics, biotechnology, 3D imaging. These are industries we actually created in New Mexico and have allowed to leave our state and create jobs outside our state.

Are you aware that the University of New Mexico is one of the top biotechnology research institutions in the country? I’m a cancer survivor of 38 years. My wife and I have raised some money for them. We’re very involved with them, so I know some of this stuff.  I sit on two board over there. In the last 10 years, we’ve produced over 400 patents in biotechnology research, in Alzheimer’s and cancer research. Fifty of those are now being commercialized into companies: only eight in the state of New Mexico. Now why did those 42 companies leave? One, because they needed investment funds. The investment funds weren’t in the state. But we have $23 billion. The next was they needed infrastructure to grow their companies. We don’t invest in infrastructure. But we have all this capital outlay that we invest in buildings that go unused. Then they need a trained workforce. We’re not training our college kids for those jobs.

SU: I’d like you to talk about another issue I think is a huge one in New Mexico, and that’s the problems poverty creates: adverse childhood experiences. It’s one of the reasons our students don’t do well in school, can’t keep jobs, and end up in the criminal justice system. Do you think some of the changes being made at the Children Youth and Families Department are adequate? Would you do something differently?

JA: The first thing I would do is bring in leadership within that department that understands our rural communities, that understands what we’re going through. Nothing against Monique Jacobson, she’s a friend of mine. I don’t know if she’s doing a good job. All I know is I’ve seen as many as 25% of CYFD open vacancies. We’re not funding those programs enough. And bottom line is, with the poverty we have and the rural communities we have, it’s gonna cost us a little more money until we can raise those communities up.

I have heard as many as 300 to 400 positions go unfilled at CYFD. There’s stress, and state employees are beat down and looked down upon. As governor, I’m going to bring in leadership — and I’ve said this across the board — I’m going to bring in leadership that understands the field, that comes from the field and understands what we need to do from the bottom up, from the community up.

SU: Is there anything you’d like to say in closing about your plan for making New Mexico a better place to raise a family?

Discaimer: NMID did not fact check every statement made by candidates in these interviews.