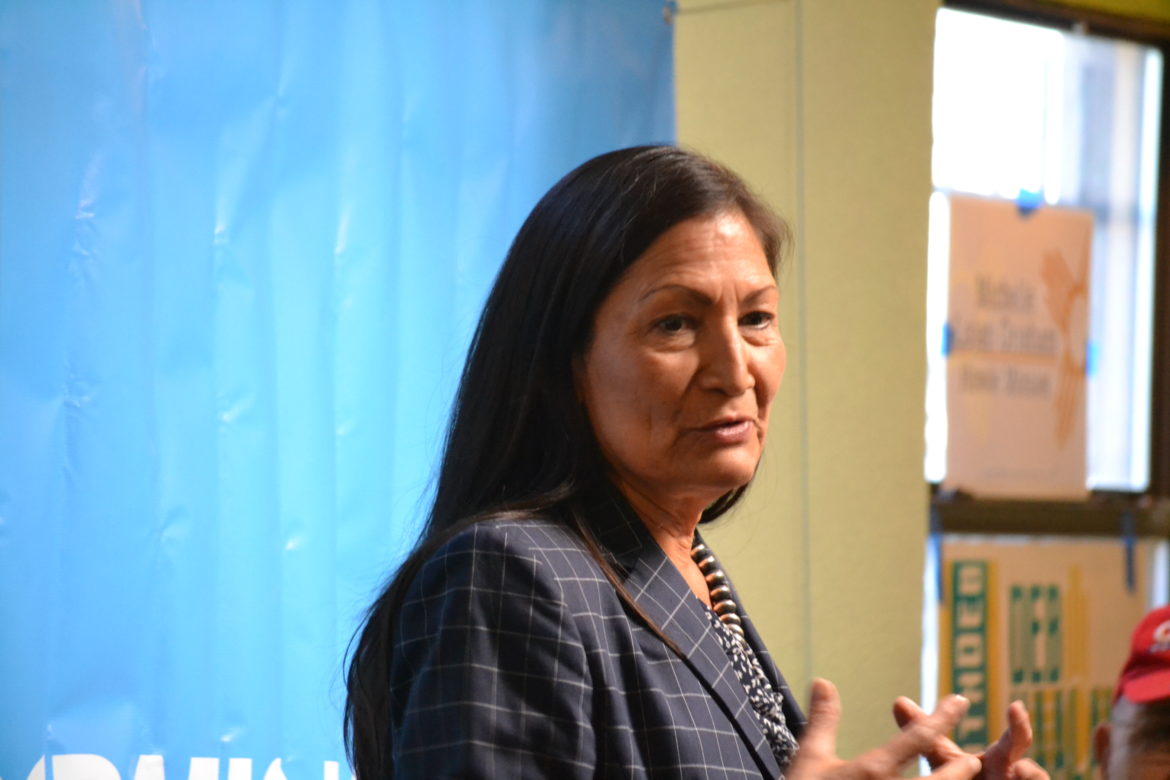 For New Mexico Democrats, the celebration and rallying didn’t stop after he primaries on Tuesday night. About 75 party officials, candidates and their supporters crammed into a back room of an iconic Albuquerque restaurant Wednesday morning to celebrate primary wins from late the night before. Democratic primary winners Deb Haaland and U.S. Rep. Michelle Lujan Grisham energized the crowd at Barelas Coffee House with talks about winning the general election in November.

“We have the most incredible Democrats,” Lujan Grisham said. “I have to say this is one of the strongest tickets I’ve ever seen.”

Haaland, who is the Democratic candidate for the congressional seat Lujan Grisham currently holds, encouraged Democrats to take any criticism from Republicans with a grain of salt.

“You know all of this doesn’t have to be so serious, when we’re getting hit with this barrage of horrible things from the Republicans,” Haaland told the crowd. “We can still have fun in light of that too. We just need to make sure we get our voters out because this is a Democratic state and New Mexico will go completely blue in 2018.”

Lujan Grisham will face off against her congressional colleague, Republican U.S. Rep. Steve Pearce in November and Haaland faces two other opponents, Republican Janice Arnold-Jones and Libertarian Lloyd Princeton in the fall.

Lujan Grisham faced a late onslaught of attacks from her primary opponents, Jeff Apodaca, a former television executive and son of a former New Mexico governor, and state Sen. Joe Cervantes. Apodaca and Cervantes both criticized Lujan Grisham for her role in Delta consulting, a medical company founded by her and state Rep. Deborah Armstrong. Delta contracted with the state to run the high-risk insurance pool. Apodaca said Lujan Grisham profited from vulnerable and terminally sick New Mexicans, an accusation she countered by saying she not only divested herself from the company, but that Delta and the high risk pool actually helped those who could not get insurance even through the Affordable Care Act.

Lujan Grisham told NM Political Report that the Apodaca campaign had reached out to her campaign staff, but that she had not personally heard from Apodaca as of Wednesday morning. Lujan Grisham said she has personally spoken to Cervantes and that he was “gracious.” When asked if she thought Apodaca supporters could get on board with her campaign, she answered, “I have to believe that.”

“We’ve got to unify everyone,” she said. “I understand that every vote is a vote you have to earn.”

It’s likely Pearce and his supporters will use Apodaca’s allegations against Lujan Grisham in the coming months. While she said she takes allegations seriously and will work to set the record straight, Lujan Grisham pointed to her significant win on Tuesday night:

“Look at how voters responded to those attacks,” Lujan Grisham said.

While Haaland will face off against two opponents, she’s mostly focused on the Republican.

The number of women who won primary races on Tuesday is notable, but Haaland told NM Political Report that gender is where similarities between her and Arnold-Jones end.

“I feel like district one is a progressive district and I have been very strong on protecting women’s rights. I am pro-choice and [Arnold-Jones] is not,” Haaland said. “That’s one distinction to make right off the bat.”

Attacks from the Republican Party against Haaland have not started yet, but she said she expects them.

“I’m sure [the Republican Party is] going to throw everything they can at everyone on our ticket,” Haaland said.