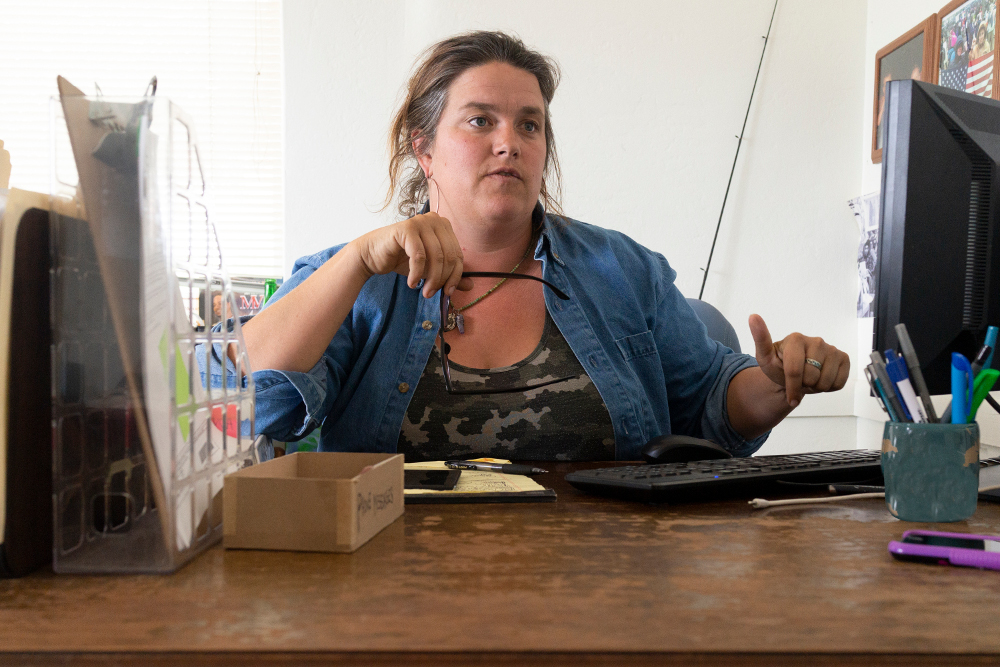 The threat came in an April 29 voicemail from a New Mexico phone number. A man, who said he was coming to Santa Fe, growled into the phone: “I’m going to murder every one of you tyranny-loving mother—ers. Be ready for me! You are all f—ing dead.”

The next day, an FBI agent met Love at her office.

“Here’s what we suggest,” she says the agent told her, “‘Keep the doors locked. If your staff is uncomfortable, they can work from home. We’re taking this as credible. We’re going to try to figure out who the caller is.’”

As director of the nonprofit Santa Fe Dreamers Project and an outspoken advocate for immigrant families in New Mexico, Love says she has faced her share of insults — often after a news report broadcasts her name. But nothing like this.

“It scared me to think that something could happen to our staff,” says Love, a former elementary school teacher in Santa Fe Public Schools. “I feel like [the work] has become hazardous in a way I never would have anticipated.”

What happened to Love and her colleagues, experts say, is a terrifying example of the open threats and unrelenting hostility that immigrant advocates face nationwide. Anti-immigrant rhetoric from the Trump administration — amplified by media politically aligned with the president — is at least partly to blame, according to the Southern Poverty Law Center, a civil rights organization that tracks incidents of hate speech.

“Both Trump and national media outlets, including Fox, have given hate groups a huge platform to spout their bigoted views,” says Heidi Beirich, director of the SPLC’s Intelligence Project. “We know that this rhetoric is not cost-free. Academic research shows hate speech is closely correlated to hate crimes.”

As a matter of policy, Albuquerque-based FBI spokesman Frank Fisher said, the agency cannot confirm or deny an investigation. But he explained the difference between strong words and a criminal act this way.

“When it crosses the line to ‘I’m going to hurt you or your relatives,’ that is where it becomes a threat of violence,” he says. “It is no longer just expressing an opinion.”

Though the caller did not carry out the attack, the threat was especially chilling because of its specificity, Love says. The caller stated exactly when, where and how she and her colleagues would die.

Love’s twin sister begged her to leave her house. Police said they would keep a close patrol of her home and office until the threat passed.

She packed her things, locked her doors and stayed away from her house for more than two weeks while law enforcement watched and waited.

In the fervor over illegal immigration, the migrant caravan this spring became a particular flash point. It was the latest annual pilgrimage meant to draw attention to the plight of Central Americans fleeing violence in their home countries.

President Trump decried the caravan as a threat to border security. Anti-immigrant groups — including neo-Nazis and white supremacists — rallied around the cause.

“Some anti-immigrant groups also attempted to mobilize protests at the border, and we saw a spike in violent rhetoric about the caravan, especially on social media,” Beirich says.

Along with a dozen or so other attorneys, Love was in Mexico with the caravan in early April to answer questions and conduct legal seminars. An NBC Nightly News report showed the migrants, including many women and children, congregating under blue-and-yellow tarps after traveling hundreds of miles by train and on foot.

Her work in Mexico coincided with the mission of the Santa Fe Dreamers Project. In addition to providing pro bono legal aid to about 700 immigrants per year in New Mexico and asylum seekers in detention, the nonprofit offers “know your rights” seminars, legal clinics for young Dreamers and community presentations.

In Mexico, Love says, she explained U.S. asylum law to migrants, described poor detention conditions and warned about family separation polices at the border. The work made her uncomfortable, she says, because “politically, I don’t want to be telling asylum seekers not to come to our border, which is what I was telling 90 percent of the people.”

A couple weeks later, on April 24, Fox News ran a segment on The Ingraham Angle that Love says broadly mischaracterized her work.

Laura Ingraham — whose nightly opinion show ranks No. 2 on cable with 4.5 million viewers, according to Nielsen — appeals to conservatives with her no-holds-barred commentary. Recently, during the intense coverage of parent-child separation, she called immigrant child detention centers at the border “essentially summer camps.”

Ingraham opened the April 24 segment by saying, “We have also learned — this is curious — that American attorneys have traveled southward to meet with migrants to instruct them on their rights to apply for asylum in the United States. We did some digging and, according to reports, two of these lawyers are Allegra Love of Santa Fe Dreamers Project and Marie Vincent, who also works for a small 501(c)3 organization.”

“The problem for the attorneys helping the members of the caravan could be the U.S. law,” Ingraham said, quoting a federal statute that prohibits citizens from inducing a foreign national to enter the U.S. illegally.

Then Ingraham made an accusation: “If these attorneys are holding what is being described as these large-group seminars and demonstrate intent to skirt the laws or to help the migrant skirt the laws, well, they could be in jeopardy at least technically.”

The Ingraham Angle never called Love or Vincent for comment.

“They never interviewed me,” Vincent told Searchlight. “I just remember being shocked they were talking about us without asking us anything.”

Searchlight New Mexico reached a Fox News spokeswoman who declined to answer questions on the record. The network did not respond to a list of questions Searchlight emailed in early July.

Love says, “The sickest I felt about this whole thing, including listening to the threat, was watching The Ingraham Angle. It was seeing something that is broadcast to millions of people that is completely mischaracterizing your action.”

Immigration has made for divisive politics for decades. What’s new, immigration attorneys say, is a sense of distain and hostility coming from the government itself.

In a speech to Congress in October 2017, U.S. Attorney General Jeff Sessions spoke about “dirty immigration lawyers.” Last month, an ICE agent in Kansas City, Mo., was accused of shoving an immigration lawyer to the ground while she tried to reunite a 3-year-old boy with his mother.

ICE told the Kansas City Star the agency takes allegations against personnel seriously and is looking into the matter. Parastoo Zahedi, a Washington, D.C., immigration attorney since 1989, has watched immigration politics shift from restrictive to relaxed and back again. She received her first concerning threat this year: an unsigned, handwritten letter warning her to “keep her home safe” and indicating the writer knew where she lived.

Several immigration attorneys and members of the American Immigration Lawyers Association interviewed for this article reported having received threatening messages in the past 18 months. Some said they have modified their home and office security in response.

At the Dreamers Project, the threat “did what it was supposed to do,” Love says. “It distracted us from the work. It made us question, why are we doing this?”

As the lawyer sat in her Santa Fe office, pondering her work’s purpose, a Spanish-speaking family — young children in tow — filed in the front door looking for help.

She had her answer.

Searchlight New Mexico is a nonprofit, nonpartisan news organization dedicated to investigative journalism. Read more of our stories on Raising New Mexico at projects.searchlightnm.com/
Reporter Lauren Villagran can be reached at lauren@searchlightnm.com.