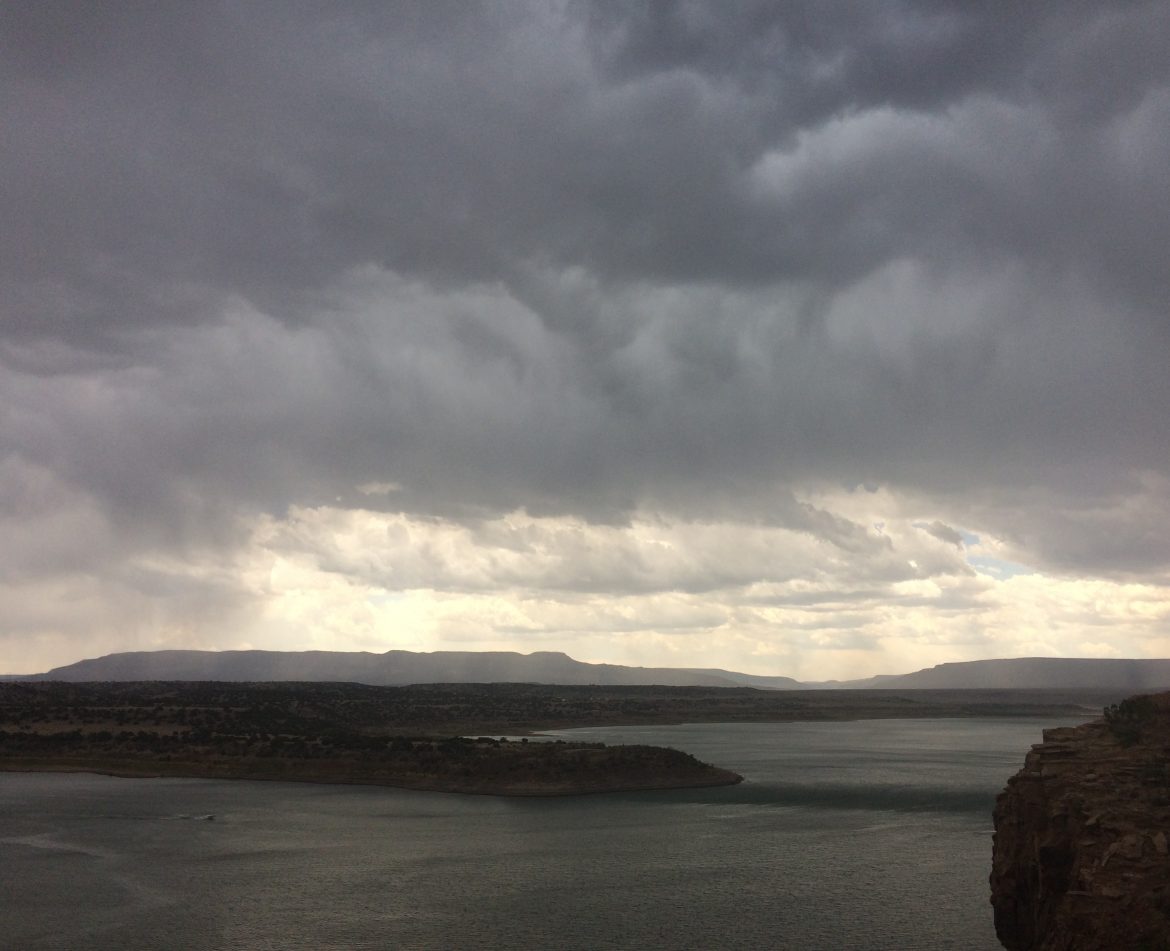 Keep cheering on those monsoons!

One of the biggest environment stories this week is the release of an updated New Mexico State Water Plan. Susan Montoya Bryan covered that for the Associated Press, noting a few of the plan’s recommendations, including:

New Mexico’s supply of groundwater should be reserved for periods of drought, communities should have sharing agreements in place when supplies are short and alternatives such as desalination should be explored regardless of the cost.

She interviewed Senate Majority Leader Peter Wirth, a Santa Fe Democrat who has worked on water issues for years. Wirth noted that the state hasn’t spent enough money on water planning in recent years and that “the plan has become more a reaction to the evolving conditions.”

NM Political Report reached out to the public information officer for the state’s two water agencies, the New Mexico Office of the State Engineer and the Interstate Stream Commission to interview State Engineer Tom Blaine or other state officials about the plan and its implementation.

We received no response.

But if we do hear back, on the state water plan—or the Texas v. New Mexico Supreme Court lawsuit or the Copper Flat mine or groundwater pumping in the East Mountains or plans to drill for groundwater beneath the Plains of San Agustin—we’ll definitely let you know.

The plan is in draft form right now, and the public comment period ends August 10. To read the plan and comment, visit the state’s website: http://www.ose.state.nm.us/Planning/state_plan.php

-The U.S. Bureau of Reclamation and the ISC continued their meetings this week in Arizona and New Mexico about environmental analysis of the Gila River diversion. The Silver City Daily Press’ Ben Fisher has done a great job covering those meetings. Not many people attended the scoping meeting in San Carlos, Arizona. But it was an interesting meeting nonetheless. According to Fisher’s July 9 story:

…should they ever succeed in building their project, the New Mexico CAP Entity must pay for the equal amount of any water they remove in New Mexico to be pumped to the Gila River Indian Community outside of Phoenix from Lake Havasu in northwest Arizona. That’s just one example. There is also a whole list of senior water rights holders along the Gila River in Arizona involved in the greater AWSA.

Among those is the San Carlos Apache Tribe. According to greater CAP’s website, the San Carlos Tribe’s rights are only partially settled. Their voice hasn’t entered the New Mexico Unit discussions in recent years. As of Saturday’s scoping meeting, representatives say that will change.

San Carlos Apache Tribe legal counsel Steve Titla spent a great deal of time speaking to representatives of the various agencies present at Saturday’s open house. He refrained from comment Saturday, however, as he said, “The Tribe is going to make a formal comment on this project at a later time.”

He also covered the meetings in Cliff-Gila and Silver City.

-The public comment period for the Gila River diversion is open until July 20. For more information: https://www.nmuniteis.com/submitting-your-comments/

-Fisher also wrote about additional changes to the plans for the diversion, and the New Mexico Central Arizona Project Entity’s official request to the U.S. Department of the Interior for the authority to construct, operate and maintain the diversion. If you appreciate his dogged work covering all these meetings, support your local newspaper! Without local, on-the-ground reporters, we all miss out on important things happening in our communities.

-If you missed our story about monsoons, national forest, rivers and reservoirs, you can read it here. (And we’ve had some website problems this week. Thanks for your patience as we’ve worked through those.)

-The Roswell Daily Record reported that State Engineer Tom Blaine is “hopeful from ongoing settlement talks that a 2019 priority call on Pecos River waters can be avoided even as drought conditions continue throughout the state.”

-In the Carlsbad Current Argus, Adrian Hedden has a story about plans moving forward to drill for oil from beneath the city of Carlsbad. According to his story:

Artesia-based Santo Petroleum was approved by the City Council in August 2017, to go door to door throughout the city and approach residents to offer five-year leases of their mineral rights.

Santo President Hanson Yates said the company obtained about 3,000 leases in the last year, covering the “vast majority” of the planned leasing area.

-This week, Triad National Security, LLC began management transition of Los Alamos National Laboratory. According to a press release from The Texas A&M University, the four-month transition began on July 9. Triad includes Texas A&M, the University of California and the Battelle Memorial Institute.

U.S. Department of Energy Secretary Rick Perry is an alumni of Texas A&M, the University of California is part of the current management team at Los Alamos and the Batelle Memorial Institute

According to the release, Triad is supported by subcontractors Fluor, Huntington Ingalls Industries, Longenecker & Associates, Merrick-SMSI and TechSource.

Dr. Thomas Mason will serve as president of Triad and director of Los Alamos. Mason directed he U.S. Department of Energy’s Oak Ridge National Laboratory in Tennessee for more than a decade and recently worked as senior vice president for global laboratory operations at Battelle. The transition period ends Nov. 1.

Albuquerque Business First has a list of other leadership positions announced by the group.

-As always, hit me up on Twitter if you see environment stories around the state or want to share some photos, especially of the state’s rivers and reservoirs this summer.