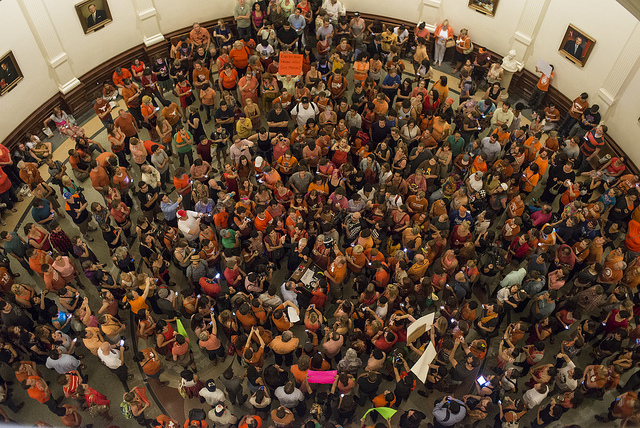 Protesters gather outside the Senate Gallery in the Texas State Capitol in 2013 minutes before midnight to stall a bill that would put strict regulations on abortion facilities.Flickr/cc

During a sit-down earlier this month in the sparse Albuquerque administrative office for Planned Parenthood of New Mexico, CEO Vicki Cowart wondered aloud if the U.S. Supreme Court’s Roe v. Wade decision had lulled much of the public into taking legal abortion for granted. Here in New Mexico, abortion access has been solidly maintained by decades of activism by rights proponents and their collaborations with supportive elected officials.

“Two generations of women have grown into adults with this not being an issue,” said Cowart.

Yet two generations of women have seen gradual rollbacks in abortion rights and access in many other states across the country, where anti-abortion activists intent on ending the practice have been doggedly, methodically successful.

Roe v. Wade “is in tatters now,” said Cowart. And potential shifts at both federal and local levels could have profound repercussions in the lives and well-being of women in New Mexico, including women who travel to the state for services after being denied access to abortion in their home states. Cowart said Planned Parenthood of New Mexico regularly treats women from as far away as North Dakota and Texas

Yet there’s one thing activists who oppose abortion and abortion-rights advocates have in common: They’re marshalling resources to motivate strong voter turnout and prepare local supporters for pivotal midterm elections this fall.

Out to win in the court of public opinion

Both abortion rights advocates and opponents believe their ideology can sway the public at large, thus generating lasting electoral impact.

Vince Torres is executive director of the Family Policy Alliance of New Mexico, a local public policy arm of the national Family Policy Alliance. Its mission is to work toward “a nation where God is honored, religious freedom flourishes, families thrive and life is cherished.” The alliance is a public policy partner of the conservative Christian Focus On the Family, a Colorado-Springs based nonprofit centered on evangelical causes.

Torres says concerns about negative outcomes for women when abortion access is curtailed distract from moral and Biblical imperatives and to support pregnant women. “We certainly sympathize with the overwhelming reality women face during unplanned pregnancies,” said Torres.

He added that local organizers opposed to abortion are “very concerned” about a possible repeal of New Mexico’s 1968 law criminalizing abortion. New Mexico House Speaker Brian Egolf, D-Santa Fe, has indicated that repealing the law will be a priority during the next session, Torres said, which means his group and its allies plan to mobilize people of faith and others who share a commitment to opposing legalized abortion and supporting religious liberties.

While leadership and support from the governor’s office are important, Torres added, changes to law are ultimately in the hands of local legislators. “That is why this year’s election is so critical.”

And it’s why abortion opponents are busy publicizing their endorsements of candidates and distributing voter guides—and working at other efforts. The New Mexico Family Policy Alliance helped send state Rep. Rebecca Dow, R-Truth or Consequences, and House Minority Whip Rod Montoya, R-Farmington, to the annual Statesman Academy, a conference hosted by the education arm of the Family Policy Alliance. Torres said conference classes are taught by “experienced Christian legislative leaders, both from the state and federal level.”

“We believe the majority of New Mexicans want to promote a culture of life in our state,” said Torres. “Protecting the unborn is something many New Mexicans deeply care about, particularly people of faith. Unfortunately, many of our current and past elected officials are out of step with their constituents on this issue, and, as a result, New Mexico remains a state with some of the fewest abortion restrictions in the nation.”

The Right to Life Committee of New Mexico’s Executive Director Dauneen Dolce said that because her organization’s work is more educational than political, its focus on public opinion has been continuous. The group has also endorsed candidates for governor and other state offices, with a slate of state House candidate endorsements scheduled for mid-August. “We use all our communication ability to get this out to the public across the state.”

He said his experience during New Mexico’s 2016 election taught him that reproductive health access is a mobilizing issue, including in rural districts where progressive-leaning candidates were elected by high voter turnouts outside of Las Cruces and in the Mesilla Valley. And the most recent legislative session saw a petition to repeal New Mexico’s 1968 law criminalizing abortion amassed 4,700 signatures before it was submitted to the governor’s office.

“Not a small feat for a state this size,” Martinez said, adding his conviction that with new urgency around Roe and the U.S. Supreme Court, those efforts are going to gain momentum.

He said that after high turnout during this year’s primary election, 87 percent of candidates working with Planned Parenthood Votes New Mexico were elected in hotly-contested Democratic primaries throughout the state. He pointed to his clipboard loaded with voter registration forms.

“Reproductive healthcare for women is so intertwined with healthcare for trans people and gay men, … so we lay out what’s at stake at the federal level,” Martinez said. “But then it’s also helping folks understand what we can do at the statewide level to set up those failsafe protections.”

Other ways to get involved, Cowart said, include talking to neighbors, getting people registered to vote, working with a preferred candidate or volunteering to help people with transportation difficulties drive to polls. “Take no chances. Elections matter so much right now.”

The Right to Life Committee of New Mexico also plans to mobilize voters in preparation for the 2019 legislative session. Dolce said anti-abortion groups will be pushing laws to require parental notification for minors as well as controversial “woman’s right to know” legislation.

“Woman’s Right To Know” acts, which include requirements that medical providers give emotionally loaded and scientifically controversial information to patients about the risks of abortion, have passed in many other states following a concerted push by groups like Americans United for Life. The group has designed and promoted model “Woman’s Right to Know” legislation for lawmakers to import.

Torres said his organization and its allies maintain a long-range focus when it comes to rolling back abortion rights: “Our goal is to get people of faith from the pews to the polls.”

Back at Planned Parenthood, Cowart sounded determined to stay hopeful. “In a glass half-full kind of way, maybe now is an opportunity for people to rise up and say, ‘Let’s get serious about this. Let’s keep this from getting any worse, from backsliding in the other direction.’”