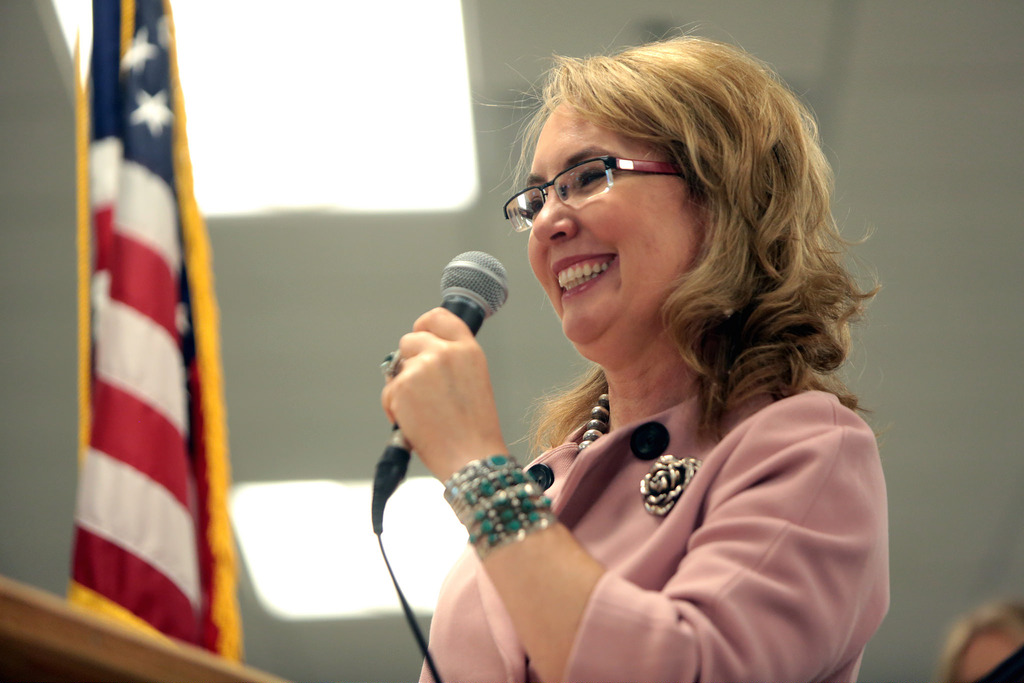 Former U.S. Congresswoman Gabrielle Giffords speaking with supporters at the Women Together Arizona Summit at Carpenters Local Union in Phoenix, Arizona in 2016. Flickr/cc

When retired U.S. Navy Captain and astronaut Mark Kelly asked nine high school students how many knew someone who had been shot, all of them raised their hands.

The students were from Albuquerque, Rio Rancho, Santa Fe and two schools on tribal land.

He said that’s the first time every student raised a hand; it’s usually closer to 50 percent when he asks that in other states—and closer to zero percent in other developed nations.

Three of the students later said they had been shot at themselves .

Kelly appeared with his wife, former congresswoman Gabby Giffords in Albuquerque on Tuesday. Giffords survived an assassination attempt in Phoenix in 2011 in which six other people were killed. She has since become one of the most high-profile gun violence prevention activists in the country.

Albuquerque Mayor Tim Keller and First Lady Liz Kistin Keller also took part in the roundtable discussion with student activists, some of whom were part of New Mexicans to Prevent Gun Violence or March for Our Lives.

The students spoke about their experiences with gun violence. One high school student said he became involved when a friend killed himself with a gun. Another said that he’s known so many people who have been shot at that he’s lost count.

Kelly offered advice to the students on how to advance the cause of gun violence prevention. He encouraged them to vote, when eligible, to make sure their peers vote and to call their legislators and other elected officials.

Giffords herself briefly spoke, saying that we live in “scary times” and urged the students to “make our country a safer place, a better place.”

Keller told students that the real battleground is at the state level, in part because local governments have their hands tied.

But he was optimistic that their generation would be able to move gun violence protection forward.

“Thanks to your generation, I think there’s more hope than there has ever been to reduce gun violence,” he said.

He compared it to the LGBTQ rights movement, which saw a swift move towards gay marriage legalization after years of incremental moves forward.

“As a group of people, you guys can be pretty powerful if you organize as a group and worked on this issue at the state and local level,” he said.

Just down the hall, state legislators held a joint hearing that included presentations on four bills, including one that passed the Legislature last year and would have stopped domestic abusers from keeping their firearms, but was vetoed by Gov. Susana Martinez. .

Julia Mazal and Sophia Lussiez, high school students who also participated in the roundtable discussion, presented a bill in front of the Legislative Health and Human Services and Courts, Corrections and Criminal Justice Committees.

According to the students, the Child Access Prevention Bill would prevent minors from accessing guns.

Mazal told legislators two-thirds of school shootings could not have happened if the shooter did not have access to guns, such as at home. Since the mass shooting at Columbine High School in 1999, nearly 150 young men have turned firearms upon schoolchildren.

Similar legislation passed the Legislature in the 2017 legislative session, but Martinez vetoed the bill. She said in her veto message that judges already had the authority to bar those subject from restraining orders from possessing firearms.

While it has been rare for gun control bills to become law over the past few decades, thanks in large part to lobbying from organizations like the National Rifle Association, some states have passed so-called “red flag” laws to allow authorities to remove firearms from those deemed to be an imminent danger to themselves or others.

“New Mexico has a real opportunity to use this law to reduce its high suicide rate,” she said.

New Mexico has the eighth highest rate of suicide in the nation.

State Sen. Richard Martinez, D-Española, also presented a bill that would close what he calls a loophole on gun sales through the internet by requiring background checks for gun sales arranged online.

“This is about denying convicted felons and people who should not have possession of firearms,” Albuquerque Police Department Deputy Chief Harold Medina told legislators.