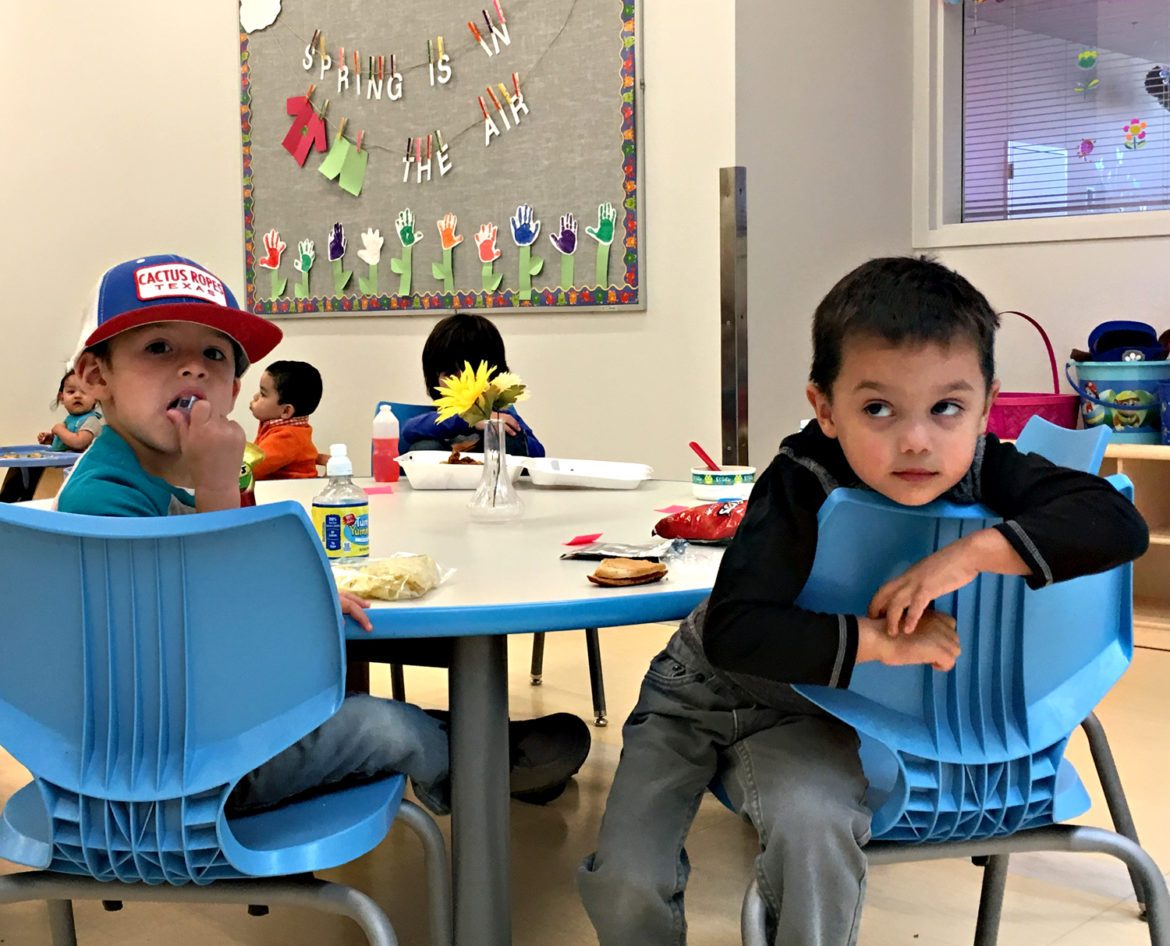 Children at the Bright Beginnings Child Development Center gather at the family style tables to eat lunch. Because the center is so new, parents need to pack or bring in food for the children, but the directors are applying to become a part of the state's food program.

A visitor heading down NM-128 to Jal would be forgiven for believing there were more people driving pickups and equipment trucks on the congested state highway than living in the small oil patch town of just over 2,100 people.

Jal is an old ranching community — JAL was the brand of the John A. Lynch herd, brought to the area by settlers in the early 1800s — but today, oil is its economic engine. And that engine is humming.

New Mexico’s most recent oil and gas boom has filled Heaven in a Cup, a retro burgers-and-shake shack off Main Street, with hungry oil field workers. Encampments of RVs and campers have sprung up around town and the economic resurgence has helped refuel the tiny town that sits just across the border from Texas.

Not all the energy is in the oil fields, though.

In recent years, Jal has built a new elementary and junior/senior high school, rebuilt its health clinic and updated Jal Lake Park. And the influx of oil field workers has led to an innovative new child care center that brings together two state programs under one roof in a way that had never been done before.

Teachers at Jal Elementary identified the need for high-quality child care for many of those oil field workers and their families almost five years ago — and decided they were just the people to fill it.

The school has had New Mexico PreK since its inception in 2005 — but that’s limited to 4-year-olds. Jal Elementary also provides preschool for 3- and 4-year-olds with developmental delays. Both programs are only half-day.“Being an early childhood teacher we got a lot of calls, asking about child care or programs that their children could attend,” said Jamie Galindo, a special education teacher in Jal.

“Being a working mother myself, I really felt the need that child care was essential for our area cause there wasn’t any. There wasn’t even a regular in-home provider,” she said.

Some parents would be upset if their children weren’t classified with a learning disability, Galindo said, because they wanted their children in the school’s program. And there was a teacher Galindo knew at the school who would drive more than 30 miles round-trip twice a day to drop off and pick up her young children in Kermit, Texas, for child care.

So when a former superintendent called a meeting to ask for grant ideas, the early childhood  teachers piped up with an unusual one: they’d like to open a child care center at the school. The timing was right because the small district was in the process of planning a new elementary school, so they decided to build in a few extra rooms.

It turns out that was the easy part.

It took four years from the time those teachers had the idea until they opened the doors last fall on Bright Beginnings Child Development Center with Galindo and DeAnna Ramos as co-directors.

First they had to win the grant funding for start up costs, and think through exactly what the center would look like. And then there was the red tape.

The state bureaucracy didn’t know what to make of Jal’s request. No one had ever tried to have a CYFD and PED program in the same location that served the public. The Rio Rancho school district, which provided advice to Jal, has a child care center, but it is only for school district employees.

“At first that was one of our struggles, trying to figure out how we were going to braid and mesh the fundings. … We actually got a little bit of push back first thing, saying that wasn’t an option. Maybe just the first one or two conversations that we had, but then we started having more conversations (and) it started to be a possibility. Yes, we can do this,” Galindo said.

They got some outside help from the JF Maddox Foundation, a Hobbs-based nonprofit that promotes education and community development projects in the southeastern corner of the state. It provided a four-year grant worth more than half a million dollars to help set up the child care center — buying start up materials and equipment — as well as connecting the teachers with early childhood education experts to develop programming.

Maddox Foundation CEO Bob Reid said the nonprofit was interested in helping Jal Public Schools start the center because it was something that didn’t exist in Jal.

“They have been pretty crucial to creating the resource in that community,” Reid said. “They’ve done a magnificent job.”

For its first four years, the Maddox Foundation is also giving Bright Beginnings a financial cushion. The aid will taper off as it becomes more self-sustaining and the school district takes over the operational costs. Bright Beginnings is a private, nonprofit childcare center that shares a roof with a public school. It is licensed and regulated by the state, and parents pay for the care. Nearly half of the children’s families are eligible for child care assistance, which is paid for through CYFD, with parents chipping in co-pays based on their income.

That shared roof has other advantages.

Children in the half-day preschool programs just walk over to the child care area when they are done with class, making an easy transition for the kids and a convenient option for working parents.

And the ethos of early childhood education and the training they’ve received under New Mexico PreK bleeds into the child care rooms, Galindo said.

“Bright Beginning is a learning environment where they’re walking in and seeing pictures and labels and language. For me it’s more preK than child care,” said Melissa Cervantes, who put her daughter in Bright Beginnings before she was eligible for NM PreK.

That learning environment was a godsend to Cervantes. She had been driving more than two hours round trip, twice a week, to take her daughter for a 30-minute therapy session in Lovington to treat a speech delay. When the center opened up, the therapists told Cervantes her toddler would be better off spending a few days a week at Bright Beginnings.

“When we started therapy, she wasn’t saying words, she was just pointing,” Cervantes said. “After a week or two of taking her over there, she started saying single words. Then after three or four weeks she was saying two words together. Like, I eat.”

Cervantes went from taking her two days to four days a week, just so she could get the socialization and the practice of speaking to her teachers and playmates.

Having a high-quality center also gave Cervantes the chance to go back to work part time, since she didn’t have to drive to Lovington regularly and work with her daughter as intensely.

It’s also helped other parents who wanted child care options. There are nannies in town — with a town as small as Jal, everyone knows who they are, Cervantes said. And many people rely on parents and grandparents for child care, as she had done with her older son. But for people who want a more social and structured environment for their children, Bright Beginnings is something they couldn’t get just one year ago in Jal.

The demand was even greater than Jamie Galindo and her coworkers imagined.

They started with three childcare rooms — one each for infants, toddlers and children from 3 to 5  — and five employees before they opened. They’ve doubled their number of workers since then and went to a maximum capacity of 50 kids in their first year, with a waiting list of three for each room.

Galindo said she’d love to serve all the children, especially because it seems like so few, but said she wants to maintain the strict ratios that allow them to offer high-quality services. The center is working toward national accreditation that would jump it to a five-star rating by the state.

It’s a delicate balancing act, because she and Ramos want to offer high-quality early childhood education and care, pay their child care workers better, and keep prices affordable. It’s one of the learning curves they’re trying to master as they go from teachers in a highly structured public school system to quasi-entrepreneurs opening a child-care center from the ground up, with a model that has not been tried before in the state.

And reaction in Jal?

Well, the local chamber of commerce recently announced its teachers of the year: Jamie Galindo and DeAnna Ramos.